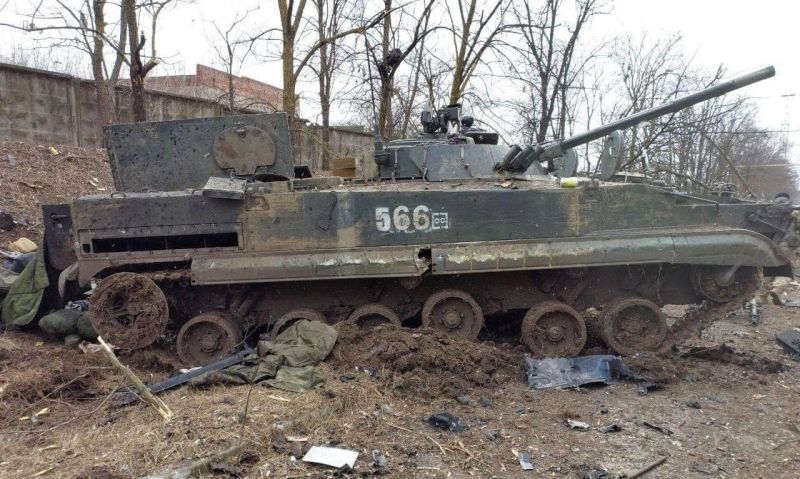 A destroyed Russian BMP-3 near Mariupol

With Vladimir Putin’s planned two-day war to topple Ukraine’s democratically elected government now in its fourth month, the free world continues to marvel at the tenacity and toughness of the Ukrainian people. Equally important to their success has been their creativity – especially in the information domain.

As the bombs began falling on Kyiv in those first hours of Russia’s invasion, Ukrainian President Volodmyr Zelensky was offered a chance to evacuate. His defiant response: “The fight is here. I need ammunition, not a ride.” Thanks to Ukraine’s tech-savvy government, that moment went viral, spreading through social media, print media and cable news, galvanizing the Ukrainian populace, and rallying the free world to Ukraine’s side. It was an early indication that Ukraine’s government was going to outmaneuver Russia in the information domain – and was primed to wage and win the information war. If half of Ukraine’s success in stalemating – perhaps checkmating – Russia is a function of Ukraine’s tenacity on the battlefield, the other half is a function of Ukraine’s alacrity in the information space.

Before getting into all that Ukraine has done to wage its information war against Putin’s regime, we need to define what exactly this kind of warfare is.

Combatants can destroy, hack and disable information systems via cyberattack – and there’s plenty of that happening in the Russia-Ukraine war – but they can also use cyberspace to shape, amplify or distort “a specific image of the world, consistent with the goals of the information warfare conducted by a given country.” This is what Ukraine’s information-war tacticians have done to great effect. In fact, they have been so effective that their tactics have achieved strategic results.

Much of Ukraine’s success in the information domain of this war flows from the computer of Mykhailo Fedorov. As Ukraine’s digital minister (a cabinet-level post), Fedorov has planned many of the country’s info-war strikes and counterstrikes against Putin. With a smartphone in his hands and an assault rifle next to his desk, Fedorov has commanded a social-media war against Russia. According to The Wall Street Journal, Fedorov and Ukraine’s Ministry of Digital Transformation organized an “Internet Army” of some 300,000 volunteers “who are helping Ukraine fight the cyber and information war, including many social-media volunteers who post messages singling out Western companies doing business in Russia.” Their social-media posts reach 100 million people every day.

The BBC reports how, early in the war, Fedorov used tweets to ask – or perhaps shame – corporations to sever ties with Russia. Fedorov sent letters to scores of high-profile multinational firms. He then posted those letters on social media to put public pressure on the corporate world to cut ties with Putin’s Russia. The results have been stunning. Nearly 1,000 multinational firms and organizations have pulled out of, ceased operations in or expelled Putin’s Russia: the Council of Europe and OECD, the International Tennis Federation and World Cup, the NHL and WWE, FIFA and F1, Shell and ExxonMobil, American Airlines and United Airlines, Pepsi and Coke, FedEx and UPS, VW and Mercedes, Ford and GM, Honda and Toyota, IBM and Apple, McDonald’s and Burger King, Visa and MasterCard, Germany’s DeutschBank and China’s Asian Infrastructure Investment Bank.

“Twitter has become … our smart and peaceful tool to destroy (the) Russian economy,” Fedorov says.

The Security Service of Ukraine has intercepted, recorded and disseminated calls from deployed Russian soldiers back to their families. Similarly, media outlets in Ukraine have facilitated calls from captured Russian soldiers to their families and used social media to broadcast the exchanges. The calls reveal a badly beleaguered Russian army and a badly misinformed Russian populace. Some calls even detail mutiny within the Russian ranks.

Private citizens have livestreamed video of dazed Russian POWs, used Twitter to beam around the world texts from confused Russian conscripts to their parents trying to make sense of an invasion neither side knew anything about, and leveraged social media to broadcast footage of smoldering Russian helicopters, abandoned Russian tanks and horrific Russian combat losses.

Ukrainians and their allies have weaponized cellphone footage of Russian atrocities against women and children, viralized gun-camera footage of drones blasting Russian convoys, created TikTok videos to instruct Ukrainian civilians on how to operate Russian tanks, repurposed the Airbnb app to provide refugee housing, used Twitter to track and disseminate tallies of destroyed, captured and abandoned Russian equipment, and even populated Telegram channels with videos and photographs of Russian KIAs. Related, to pierce Moscow’s information blockade and help the Russian people understand the scope of what Putin has done, Ukrainian citizens and soldiers have run thousands of facial scans of fallen Russian soldiers and then shared the information via social-media profiles with families of the deceased.

Ukrainians have produced slick YouTube videos of a mythic Ukrainian pilot – the Ghost of Kyiv – claimed to have become an octuple-ace, created surreal TikTok videos mixing techno-dance music with combat footage of Ukrainian soldiers defending their nation, and juxtaposed the stage-managed scenes of a paranoid Putin figuratively and literally isolated from his staff, his subjects and the world with the unscripted words and images of Zelensky defending Kyiv alongside his countrymen.

Indeed, Zelensky’s role in, and influence on, this info-war effort cannot be overstated. From the beginning, he and/or the people advising him have recognized the power of images and rhetoric in wartime. His “I need ammunition, not a ride” rejoinder, for example, stiffened spines in Europe and became a global phenomenon. His insistence on defending Kyiv won admiration among Americans, who have been disappointed by allies in recent years. And his defiant declaration to Putin’s invaders on the first day of the war – “It will be our faces you see, not our backs” – electrified his countrymen. As Bill McGowan and Juliana Silva of Clarity Media conclude, “Zelensky is wielding a modern-day slingshot in the form of social-media tools and modern communication skills that are helping him gain an upper hand in what is also a crucial battle: the struggle to control the narrative of war.”

Eric Edelman of the Center for Security and Budgetary Assessments notes that Ukraine got an assist in the information domain before the war, when the Biden administration preemptively released intelligence laying bare Putin’s plan to invade. That led to repeated denials from Moscow. But those denials, which proved to be lies, “created a presumption of disbelief, which has helped the Ukrainians dominate the information space.”

This torrent of images, data, videos and speeches unleashed via every social-media platform – some deeply moving, some chilling and thought-provoking – has shaped how the world views the conflict and thus fueled a far-reaching counteroffensive against Putin’s regime.

How far-reaching? Ukraine isn’t even firing many of the salvos: NATO, allied governments, American universities, rock stars, actors, and multinational businesses have joined the battle with a barrage of videos, apparel, tweets, info-graphs, advertisements and guerrilla QR codes. Netflix added to its library the hit TV show that made Zelensky famous. Facebook blocked access to Russian propaganda platforms. Apple de-platformed RT News and Sputnik News (both notorious purveyors of Kremlin propaganda) from its app store and then disabled the maps function on Apple devices inside Ukraine “as a safety and precautionary measure for Ukrainian citizens.”

Of course, none of this would have been possible if Ukraine didn’t have access to the information domain. Thus, a day into Putin’s attack on Ukraine, Fedorov tweeted @elonmusk: “We ask you to provide Ukraine with Starlink stations” – a reference to Musk’s system that uses satellites in low-earth orbit to connect individuals to high-speed Internet. “Within 48 hours, the billionaire tech mogul had adjusted his constellation of Starlink satellites and sent a lorry-load of Internet-ready terminals to Ukraine,” BBC News details. Musk even provided instructions (via Twitter, no less) to help Ukrainians maximize the system.

Is there misinformation and propaganda swimming inside Ukraine’s digital tsunami? Absolutely. In May, the Ukrainian government admitted – on its Facebook page, of course – that “the ghost of Kyiv is a superhero legend, whose character was created by Ukrainians!” There’s even debate over whether Zelensky himself uttered that stirring “I need ammunition” phrase. (The Washington Post is unsure, while CNN, AP and outlets in Europe stand by their reporting.

Regardless, both instances embody deeper truths: the former that Ukraine’s overmatched, undersized military has devastated Putin’s invasion force, the latter that Ukraine’s leader was and is undaunted in the face of death.

Warfare – whether of the kinetic or information variety – is not a U.S. court of law demanding “the truth, the whole truth and nothing but the truth.” Everything Ukrainians are doing in the information domain – the factual and the fabled, the slick and the grainy, the myth and the truth, the ugly and the inspiring – is part of Ukraine’s arsenal. And all of it helped Ukraine push Putin and his henchmen on their heels from the opening days of the war. Russia has never regained the initiative.

Ukraine’s success on the battlefield is as surprising as its success in the information domain. After all, in both domains, Ukraine has beaten Putin at his own game. Thanks to its skillful use of bots, troll-farms, fake news, social media manipulation, cyberwar attacks, PSYOPS and propaganda, the Putin regime was thought to have an almost mystical mastery of misinformation. All that changed in Ukraine.