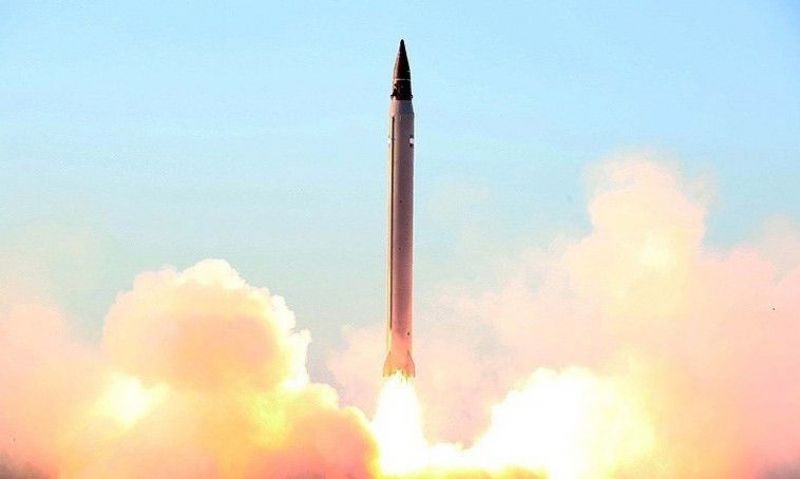 With his army reeling and hemorrhaging, Russian strongman Vladimir Putin has doubled down on his blood-soaked blunder in Ukraine – declaring a “period of partial mobilization” designed to replenish the beleaguered Russian military with some 300,000 retired and reserve personnel.

More ominously, in a message intended for Washington and Brussels rather than Kiev, Putin warns, “Our country also has various means of destruction … When the territorial integrity of our country is threatened, to protect Russia and our people, we will certainly use all the means at our disposal.” This is Putin’s not-so-subtle signal that he’s ready and willing to climb the nuclear ladder.

To deter Putin from opening the nuclear Pandora’s box, Washington can – and should – send signals of its own in this new age of nuclear brinkmanship.

Putin’s threats about nuclear weapons and other weapons of mass destruction (WMD) shouldn’t be dismissed as empty. It pays to recall that Putin and his henchmen have been rattling nuclear sabers and hinting at chemical attacks for months. Putin’s regime possesses 4,500 nuclear warheads and endorses the idea that nuclear weapons can be used to somehow de-escalate a military conflict. Putin’s regime has used nerve agents to target its enemies, deployed chemical agents against Chechen rebels and abetted Bashar Assad’s chemical attacks in Syria.

“He’s already used chemical weapons in the past, and we should be careful of what’s about to come,” President Biden grimly concluded in March. Around that same time, Biden promised “severe consequences” if Russia were to use WMDs. And the White House revealed, as The New York Times reported, that the administration had “assembled a team of national-security officials to sketch out scenarios of how the United States and its allies should respond if Russian President Vladimir Putin … unleashes his stockpiles of chemical, biological or nuclear weapons.” Doubtless, the decision to leak the existence of this taskforce was intended as a signal to Putin.

The White House has sent stronger, clearer signals in recent weeks. Asked what he would say if Putin is considering using chemical or nuclear weapons, Biden responded, “Don't. Don't. Don't. You will change the face of war unlike anything since World War II,” adding that the U.S. response would be “consequential.”

Secretary of State Antony Blinken has said, “It’s very important that Moscow hear from us and know from us that the consequences would be horrific, and we’ve made that very clear.”

National Security Advisor Jake Sullivan delivered perhaps the bluntest public warning to Moscow, revealing that the administration has “communicated directly, privately to the Russians at very high levels that there will be catastrophic consequences for Russia if they use nuclear weapons in Ukraine. We have been clear with them and emphatic with them that the United States will respond decisively, alongside our allies and partners.”

These statements have been underscored by a calculated repositioning of military assets. The United States now has more than 100,000 troops in Europe – a 30% increase since late 2021. To fortify its eastern flank and signal Moscow, NATO has moved deterrent assets into Bulgaria, Hungary, Romania, Slovakia, Estonia, Latvia, Lithuania and Poland. And long-range U.S. bombers have taken to Europe’s skies. B-52s have conducted live-fire bombing runs over Swedish ranges in Northern Europe, lumbered from Britain through Central Europe and all the way to the skies over Romania, carried out joint maneuvers with Norwegian and Swedish fighter-jets near Norway’s (and Russia’s) Arctic territories and, as Air Force Magazine reports, executed “low approach flyovers” in the skies of NATO allies in Eastern Europe.

To their credit, underlaying all of this big-stick signaling and countersignaling by NATO militaries has been a steady flow of weapons to help Ukraine defend its people and liberate its territory. That must continue, because Putin’s main goal in rattling the nuclear saber is to deter the free world from sending the quality and quantity of weapons needed to roll the Russian army back to the borders it began erasing in March 2014.

Whether wittingly or unwittingly, Biden is borrowing lessons from an old playbook written by his predecessors.

During Stalin’s blockade of West Berlin, for instance, President Harry Truman deployed B-29 bombers to Europe to bolster the Berlin Airlift – and send a signal to Moscow.

After listening to Khrushchev bluster about the Red Army’s overwhelming conventional edge in Germany and Central Europe, President Dwight Eisenhower calmly responded, “If you attack us in Germany, there will be nothing conventional about our response.” That was code for America’s atomic arsenal. Khrushchev got the message.

When the United States discovered Soviet nuclear-missile bases in Cuba, President John Kennedy dispatched more than 60 warships to the waters around Cuba. And 90 B-52s began round-the-clock orbits over the Atlantic, coiled for a presidential go-order that would unleash them on the Soviet Union.

During the 1973 Yom Kippur War, after Moscow threatened unilateral intervention, the Nixon administration “responded by putting its nuclear forces on worldwide alert,” as a State Department report explains. Again, Moscow got the message.

When Iran began attacking civilian cargo ships in the Persian Gulf, President Ronald Reagan allowed allied commercial vessels to be reflagged with the Stars and Stripes, ordered U.S. warships to escort those vessels, and vowed that “the use of the vital sea lanes of the Persian Gulf will not be dictated by the Iranians” and “will not be allowed to come under the control of the Soviet Union.” Both Moscow and Tehran got the message.

This sort of signaling played an important part in promoting U.S. interests, defusing U.S.-Soviet confrontations and preventing the Cold War from mushrooming into a world war. But Washington didn’t stop practicing the fine art of military messaging and signaling after the fall of the Berlin Wall.

Consider President George H.W. Bush’s messaging to Saddam Hussein in 1991. Less than two weeks before he ordered U.S. forces to begin the liberation of Kuwait, Bush sent Secretary of State James Baker to meet with his Iraqi counterpart and deliver a letter to the Iraqi dictator. That letter explained, “The United States will not tolerate the use of chemical or biological weapons … The American people would demand the strongest possible response. You and your country will pay a terrible price if you order unconscionable acts of this sort.” Saddam didn’t use his vast WMD arsenal against the coalition.

When North Korea threatened war in early 2013, Washington sent B-2s on unusually – and purposely – high-profile maneuvers over the peninsula. In 2016, Air Force officials made a point of noting that a B-1B Lancer’s “low-level flight near the DMZ” was “the closest a Lancer has ever flown to the border of the Republic of Korea and North Korea.” It also marked the first time in decades B-1Bs had landed in South Korea.

In 2015, two days after PRC bomber aircraft menaced Taiwan’s airspace, a pair of Marine Corps F-18s landed on the island (the first such landing in 30 years), citing what the Pentagon called a “warning light” issue. More likely, the United States was signaling Beijing that Taiwan isn’t alone. In 2020, the Trump administration quietly deployed Marines and special-operations units onto the island to train Taiwan’s military. The Biden administration then let it be known that U.S. troops were on the island. Again, Washington was sending that same message to Beijing: Taiwan isn’t alone.

These are the sorts of things presidents have to say and do to defend the national interest, contain our enemies, support our allies and partners, and maintain some semblance of international order.

Of course, Putin’s Russia is not Kim’s North Korea or Saddam’s Iraq. Russia is a full-spectrum military power with the capacity to strike the United States and its allies with nuclear, conventional, space and cyber weapons. However, Russia’s status as a full-spectrum nuclear power doesn’t eliminate options the United States and its NATO allies have at their disposal in the event that Putin uses nuclear, biological or chemical weapons. NATO’s militaries possess massive nuclear capabilities; unmatched left-of-launch, cyber, electronic-warfare, space, and counter-space capabilities; and enormous conventional air, sea and land arsenals (just a tiny fraction of NATO’s conventional arsenal has decimated Putin’s invasion force in Ukraine).

As Gen. H.R. McMaster observed recently, “Putin has much more to fear from escalation than anybody else.”

Given what Biden, Blinken and Sullivan have revealed publicly, it seems likely that message has been privately delivered to Putin – and perhaps more importantly (via cyber capabilities) to those Putin would order to pull the trigger.

Obviously, Putin and his generals are the most important audience in such signaling. However, there may come a time when Biden, like Kennedy, needs to deliver the message in a formal address to the nation. The purpose of such an address would not be solely to hammer home the point for Putin and his henchmen, but also to prepare the American people for what Putin’s actions could unleash, to underscore the seriousness and stakes, and to define what our national objectives are. Those objectives today are similar to what Kennedy outlined 60 autumns ago: “to prevent the use of these missiles against this or any other country.”