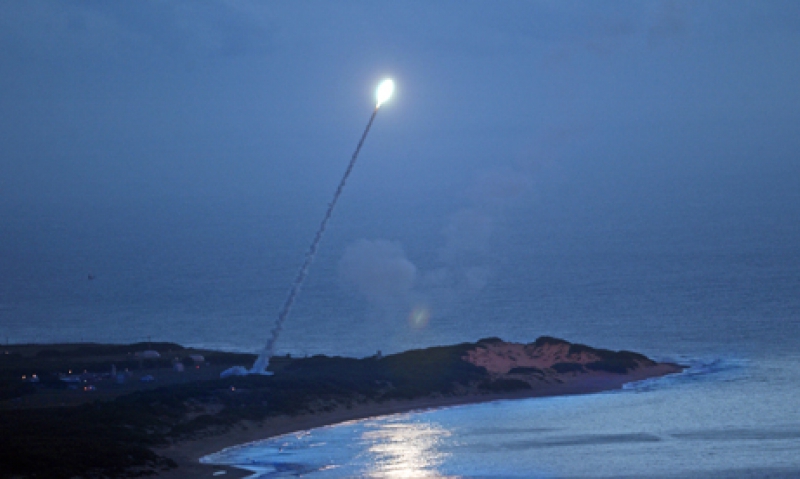 A threat representative target is launched from the Pacific Missile Range Facility (PMRF) to be intercepted as part of a Missile Defense Agency test of the sea-based capability under development. U.S. Navy photo

President Obama has tried to use his formidable rhetorical skills to convince Poles, Czechs and Americans that killing permanent missile defenses in Eastern Europe will somehow enhance America's missile-defense capabilities in Eastern Europe.

"Our new missile-defense architecture in Europe will provide stronger, smarter and swifter defenses of American forces and America's allies," he says. "It deploys capabilities that are proven ... And it ensures and enhances the protection of all our NATO allies."

But there are many observers on both sides of the Atlantic who don't see it that way.

Some of us couldn't help but notice the president's use of the word "proven." Opponents of missile defense often use words like "proven" to set such a high standard for deployment that anything less than perfection means the system is "unproven." In fact, weapons systems are often deployed before they are proven. Consider the JSTARS planes or bunker-penetrating bombs rushed to the Gulf before Operation Desert Storm, or the once-maligned stealth technology that proved its worth in the Balkans, Afghanistan and twice in Iraq, or the armed drones that have emerged as the weapon of choice in the AfPak theater.

A spokesperson for Poland's Ministry of Defense called the decision "catastrophic for Poland"-and understandably so. After all, Poland and the Czech Republic exposed themselves to Russian ire by agreeing in 2007 to allow permanent U.S. missile-defense bases on their soil. Now that the Obama administration is reversing U.S. and NATO policy, these allies are left with questions about where they stand.

Worse, the perception that the U.S. has taken Moscow's side is a diplomatic blow for them, a bitter reminder of the West's indifference to their security before and after World War II, and a victory for Russian prime minister Vladimir Putin and his puppets.

Some dismiss Poland's reaction as paranoia. However, as the old saying goes, it's not paranoia if they're really out to get you. Just consider Russia's latest round of war games, which involved a simulated nuclear strike against, and invasion of, Poland.

So far, there has been scant indication that Moscow will reward Washington for its policy 180 by supporting efforts to rein in Iran. Instead, Putin has warned against "premature" action. "There is no need to frighten the Iranians," he said after Washington reversed course on missile defense.

What's happening - or more accurately, not happening - on the ground in Poland and the Czech Republic is not the only blow to missile defense. As the Center for Strategic and Budgetary Assessments details, the Obama administration plans to deploy 30 ground-based interceptors in the United States, instead of the projected 44; kill the multiple-kill vehicle program; and cancel construction of a second airborne laser (ABL). All told, while virtually everything else in the federal budget grows, the missile-defense program is shrinking.

The irony is that missile defense continued to make steady progress in the past 12 months - and so did our enemies' missile capabilities.

That brings us to the reason an international missile defense - not just a theater or regional defense - is so necessary: the progress of our enemies in the twin areas of missile technology and nuclear weaponry.

After testing a long-range missile in April, North Korea detonated a nuclear bomb in May. In September, Pyongyang announced that it was weaponizing plutonium. If that wasn't enough to get our attention, in November the North blustered about a new round of nuclear-fuel reprocessing.

In May and September, Iran tested medium-range missiles capable of carrying a nuclear warhead. Also in September, the United Nations confirmed that Iran has "sufficient information" to build a nuke, underscoring assessments that Iran could deploy a nuke before the end of 2010. By the end of September, the United States exposed a secret Iranian nuclear facility. In November, word leaked that Iranian scientists had begun experimenting on a so-called "two-point implosion device" - highly advanced technology that allows for warhead miniaturization.

The State Department concludes that Iran could have missiles capable of hitting the United States as early as 2015, which helps explain why the Bush administration pushed so hard for 10 ground-based interceptor missiles and permanent radars in Eastern Europe, as well as a full quiver of 44 interceptors in Alaska and California. Together, these assets would have provided an early glimpse and early shot at inbound missiles from North Korea and Iran.

To be sure, the system was unproven and largely untested. But as Lt. Gen. Trey Obering, former director of the Missile Defense Agency, once explained, "You have to build it to really test it."