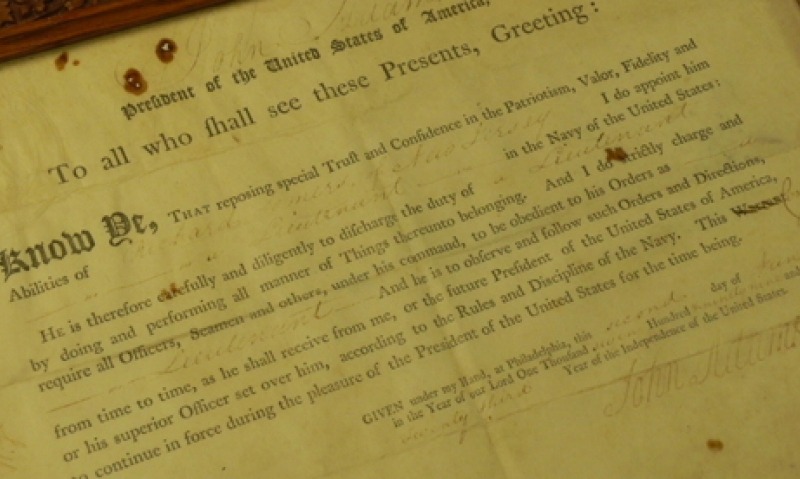 This certificate, signed on June 2, 1799, by President John Adams, awarded the rank of lieutenant to Richard Somers, captain of the "Intrepid." Photo courtesy Atlantic Heritage Center

A House of Representatives amendment that supports bringing home the remains of U.S. Navy heroes from Libya has no counterpart in the Senate's version of the National Defense Authorization Act (NDAA) for fiscal 2012.

While the Senate Armed Services Committee chose not to address the issue, the House passed an amendment (H.R. 1497) on May 26, directing the Secretary of Defense to take whatever steps necessary to "exhume and transfer the remains of certain deceased members of the Armed Forces buried in Tripoli, Libya...."

Those "deceased members" died on Sept. 4, 1804, in the harbor of Tripoli when an explosive-packed ship they crewed, the Intrepid, blew up prematurely and killed all 13 men on board, led by Master Commandant Richard Somers and his second-in-command, Lt. Henry Wadsworth (uncle of the poet Henry Wadsworth Longfellow).

The sailors' remains were discovered onshore the next day, abused by the enemy and partially devoured by a pack of stray dogs before Capt. William Bainbridge and other Navy prisoners in Tripoli were allowed to bury Somers and his men.

The American Legion's National Executive Committee passed a resolution in May that urges "the President and the Congress to support legislation and policies that will use all reasonable resources to achieve the fullest possible accounting of all missing American servicemembers, regardless of location or era of loss."

Tim Tetz, the Legion's Legislative director, wrote a May 24 letter to House Speaker John Boehner, asking for his support of H.R. 1497, authored by Reps. Mike Rogers of Michigan and Frank LoBiondo of New Jersey.

"There, within a forgotten cemetery, lie the remains of an American naval hero, Master Commandant Richard Somers, whose legacy inspires those still serving in the Navy," Tetz wrote. "There lie remains that family members have pled to have returned to the United States.

"It is therefore the opportunity and - more importantly - duty of Congress to direct that we recover the remains of those Americans within Tripoli.... The time has come to bring our heroes home."

Michael Caputo has been lobbying on behalf of the Somers Point community to get the Intrepid crew's remains back to America. "They aren't lying in a Normandy-style hallowed ground. Some are in a ratty, unkempt cemetery and others lie jumbled together underneath Green Square," where Col. Muammar Qaddafi and his government hold public rallies.

"These men didn't get an honorable burial; they were dragged through the streets, fed to wild dogs and dumped in mass graves," Caputo said. "But the most important reason to bring them back is because their families have wanted them home for more than 200 years." Caputo is a member of American Legion Post 362 in East Aurora, N.Y.

Jack Glasser, mayor of Somers Point, N.J. (founded by the naval hero's ancestors) is part of an ongoing local effort to retrieve the remains of the Intrepid crew.

"As a veteran, I can't understand why they're still there," Glasser said. "For the life of me, I cannot understand why we've left them there for 206 years in Libya. It's time to bring them home." Glasser retired from the New Jersey Air National Guard with 20 years of service.

Although Somers has had six U.S. Navy ships named after him, and a monument honoring him and his crew stands at the U.S. Naval Academy, the United States has never reclaimed the Intrepid crew's remains from Libya.

Sally Hastings, president of the Somers Point Historical Society and Museum, said historical documents indicate family members tried to get Somers' remains back to America in the early 1800s.

"Two centuries later, the story of Richard Somers and the crew of the Intrepid is not complete," Hasting said. "There is more to come. Ultimately, the Somers Point Historical Society will be the organization that plans any local burial of Richard Somers, with the assistance of the city and - I would hope - veterans groups."

Hastings and her organization have taken a leading role in building support for their cause, raising funds for a monument to Somers, and planning the ceremony for its eventual dedication at Somers Point.

"Any servicemember killed in the line of duty deserves to come home," said Barry Searle, director of the Legion's National Security/Foreign Relations Division. "First, it is important for family members to have their loved ones properly buried in an environment that isn't hostile.

"But bringing Somers and his men back home is also a matter of national honor and trust. By making this effort, we are telling future generations that the United States stands by its commitment to those who serve in uniform."

As for an amendment of support being excluded from the Senate's version of the NDAA, Tetz said The American Legion will still have the opportunity to press for its inclusion on the Senate floor. "And we fully intend to do that if need be."