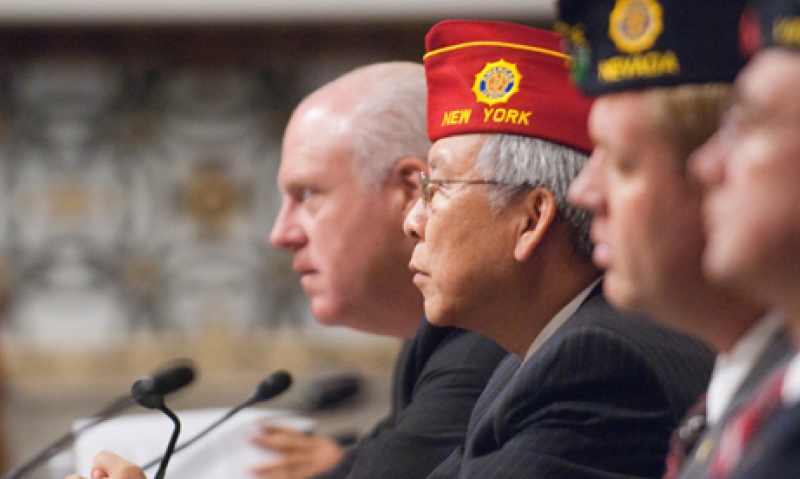 American Legion National Commander Fang A. Wong is urging Congress to pass legislation to reduce the number of unemployed veterans in the United States, now numbering more than 1 million.

"As Veterans Day approaches, there is no better time to close the deal and turn these two good bills into one that really makes a difference for those who have serve our nation," Wong said. "I continue to applaud the efforts of Chairman Murray and Chairman Miller in pursuing their veteran jobs legislation. I urge them to work together and close the deal next week as a way to say thank you to our nation's veterans during the week dedicated to their sacrifices."

During testimony before a joint session of the House and Senate Veterans' Affairs Committees in September, Wong applauded incentives to stimulate veteran hiring offered in both bills. In the testimony and follow-up meetings with members of Congress, he urged compromise and timely action from both houses.

The Veterans Opportunity to Work (VOW) Act improves and mandates the TAP program, expands training for approximately 600,000 veterans between the ages of 35 and 60, and works to improve transferability of military experience into credits for civilian credentialing and licensing.

"We agreed with the initiatives proposed in both and encouraged passage so a compromise bill could be worked out," Wong said. "During my testimony, both Chairman Murray and Chairman Miller pledged to me they'd work together to meet that goal." Both measures have strong bipartisan support. The VOW Act passed the House by a vote of 418-6.

"Unfortunately, we're hearing an amended bill addressing veteran joblessness might be acted upon in the Senate with provisions beyond the scope of these original bills," American Legion Legislative Director Tim Tetz said. "We're concerned that those changes might endanger the bipartisan support and momentum currently benefitting the VOW Act and Hiring Heroes Act. Yet we remain cautiously optimistic Congress will deliver a jobs bill next week."

"Our nation's veterans, especially the over 1 million jobless veterans, deserve a jobs program that addresses their needs," Wong said. "America's heroes should receive the bipartisan support they deserve, above the fray of partisan politics. I look forward to Congress living up to their vow of caring for America's veterans by passing a non-partisan jobs measure."