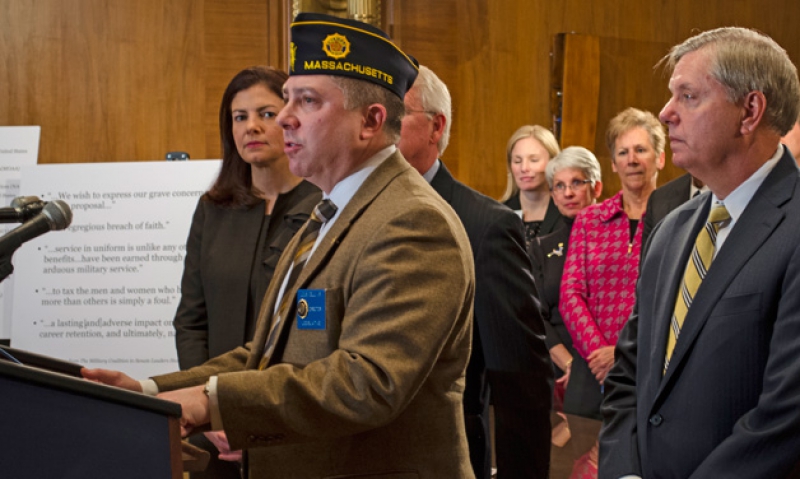 The American Legion voiced its outrage over budget cuts on military retirees’ benefits at a Dec. 18 press conference in Washington. The U.S. Senate had just passed the Bipartisan Budget Act of 2013, which – if signed by the president – will reduce cost-of-living adjustment (COLA) benefits for America’s retired veterans by more than $6 billion.

The bill was worked out between Sen. Patty Murray, D-Wash., and Rep. Paul Ryan, R-Wis., and passed the Senate by a 64-36 vote. Murray and Ryan claim the measure will drop the country’s deficit by $23 billion and reduce the impact of sequestration.

“Passing this broken legislation today was wrong,” said Louis Celli, the Legion’s Legislative director. “It was wrong because (the Senate) had time to fix it, and ... chose not to.”

While several bills have already been introduced into Congress to repeal the COLA cuts, “some who seek to ‘technically fix’ this provision are only looking to repeal the portion that affects medically retired veterans,” Celli said. “I guess the rest of the military retirees aren’t worth the trouble to fix.”

Noting that the 113th Congress has passed only 58 pieces of legislation out of more than 6,600 introduced, Celli said, “And now we’re supposed to put our faith and trust in the same Congress to pass a law that overturns this (COLA provision), when they were unable to fix it in the first place? Make no mistake – The American Legion will dedicate every available resource to repealing and overturning this provision.

”The day would go down in history as the day Congress turned their backs on veterans everywhere by selling out 0.2 percent of the American population and asking them to be held financially responsible to pay for sequestration.”

The press conference was conducted by three senators who stood up for America’s veterans and tried – in vain – to have the COLA provision struck from the final version of the budget bill: Kelly Ayotte, R-N.H.; Lindsey Graham, R-S.C.; and Roger Wicker, R-Miss.

“We lost the battle, but we’re going to win the war,” Graham said. “The cause is just, the people we’re fighting for are the greatest among us, and we’re committed now, more than ever, to right what we all deem to be an egregious wrong.” He pointed out that military retirees are the only group in the country receiving benefits whose payments are actually being cut.

Complimenting The American Legion and other veterans organizations gathered at the event for their support, Graham said he was betting that once the American people “understand what we did to the military retiree, including the disabled, and their families, there’s going to be outrage.” He said it will be “extremely hard” to repeal the COLA provision because “we’re going to run into special-interest groups” who will object. “We repealed the phone tax to finance the Spanish-American War about a decade ago. (It’s) hard to repeal anything around here,” Graham said.

Graham said he hoped President Obama would hold off on signing the budget bill until Congress can “find a fix” for the COLA provision. “We’ve got till January the 15th,” he said.

“This penalty on retired military people surprised me,” Wicker said, noting that Congress had formed a commission to look into ways to change the military retirement system, “but don’t come back without ‘grandfathering’ people who are already affected.” That commission gave Congress “a comfort level that no one would try such a thing,” Wicker said. “And now we know that they did, and so we know that it’s out there. And we know there are people in closed rooms that would negotiate something like this and break a commitment to the people who have stepped forward and volunteered – of their own free will – to make a military career.”

In the last few days, Wicker said, public awareness of the COLA issue has been heightened. “Two days ago, the press was not talking about this when they interviewed me about the budget,” he said. “I think, frankly, we’ve embarrassed some people.”

She said that some of her colleagues in the Senate were now stepping forward to help fix the COLA issue, “and now we need to go beyond words, and really follow through with action. The one thing that has disappointed me the most in all of this is that so many people – the House was rushing to get home (for) the holidays, the Senate, ‘You’ve got to pass this; we can’t figure this (COLA issue) out now.’ I don’t buy that. I think that was a cop-out. I think we could have fixed this now.

“We don’t need to do this six months from now,” Ayotte said. “We need to do it as one of the first things when we get back in January. We need to fix this so that our men and women in uniform know that we are very serious about this, and we’re not going to let this stand.”