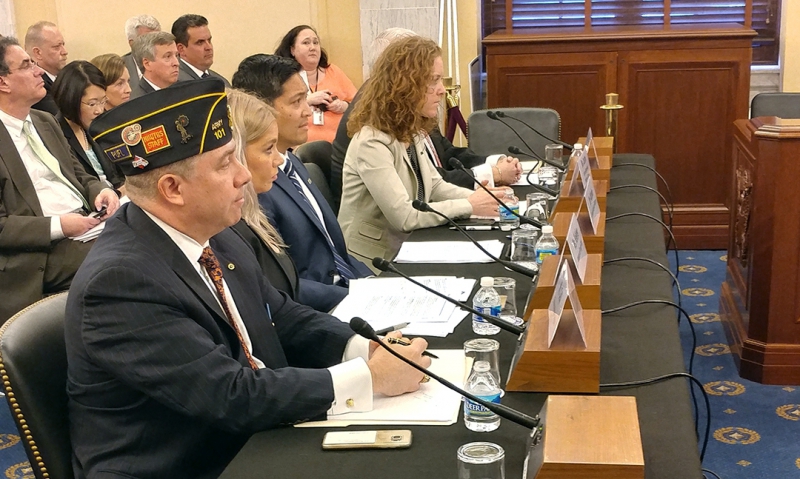 The Senate Committee on Veterans’ Affairs held a hearing May 17 in Washington, D.C., to seek testimonies from local veterans service organizations (VSOs) on more than a dozen draft bills that focus on critical issues affecting veterans and their families.

“Access to veterans health care, ensuring our veterans are able to receive the benefits they have earned, equity in services across the spectrum of veterans who faithfully served in defense of this nation, regardless of conflict, and accountability and transparency are some of the very foundational pillars that The American Legion continues to build on,” Celli said as he addressed the committee members. “Transparency and accountability are the cornerstones of leadership and good governance.”

When it comes to good governance, Celli said the Legion wants to ensure that Congress provides the VA with tools that are functional, enforceable and allow the agency to act in a manner that promotes good order, discipline and esprit de corps. Poorly crafted legislative language that fails legal and constitutional standards only serves to ruin morale and create a system of indecision, as well as a lack of surety, he said.

“The American Legion fully supports holding bad actors accountable for their actions, and criminals should be prosecuted as soon as possible,” said Celli. “(We) support giving (VA Secretary David Shulkin) any and all tools necessary to lead his agency as needed, but also want to ensure that congressional language doesn’t cause unintended consequences we have struggled with in the past.”

To ensure there is accountability at all levels within VA and that the process is transparent, Celli said the Legion supports any legislation – to include the VA Accountability and Whistleblower Protection Act of 2017 – that increases the authority given to the VA secretary to remove unscrupulous employees who are found to have engaged in wrongdoing. “Despite multiple verified cases of gross misconduct for multiple employees, the VA secretary had little authority to hold employees accountable, and many veterans subsequently lost faith in the system,” he said. “Egregious behavior would not be affected by this provision as it would surpass the already established evidentiary threshold of a preponderance of evidence.”

In addition to increased accountability, Celli said the Legion also believes in providing VA department whistleblowers with a means to solve problems at the lowest level possible, while offering them protection from reprisals and genuine protection for those who reprise against them.

The Accountability and Whistleblower Protection Act would not only establish a new system that employees could use to report retaliation claims, but also require supervisors to report all retaliation claims to facility directors, eliminating the possibility for facility leaders to claim plausible deniability of such assertions, according to Celli.

“We do not want to encourage an atmosphere that reduces the burden of managers to collect appropriate documentation,” Celli said in his written testimony. “This is why The American Legion vociferously urged Congress to provide the secretary much-needed authorities so that he may take action to improve moral, incentivize desired behavior, deter misconduct and eliminate corrupt or uncaring employees.”

As the largest VSO in the United States with a myriad of programs supporting veterans, Celli said the Legion will not waiver in its support to ensure all veterans are treated equally under law. “It is imperative that Senate Bill 591 (Military and Veteran Caregiver Services Improvement Act of 2017) not only pass but that benefits be expanded to all pre-9/11 veterans,” he said.

According to Celli, the struggle to care for veterans who are wounded takes a terrible toll on families. Perhaps the biggest is protracted frustration over how the current caregiver program operates, he said.

When the Caregivers and Veterans Omnibus Health Services Act of 2010 was passed and signed into law, Celli said this landmark legislation provided a comprehensive package of caregiver benefits including:

● Cash stipends to partially compensate for caregiver time and effort;

● Caregiver health coverage if they have none; and

● Guaranteed periods of respite to protect against burnout.

The package, however, is not available to most family members who are primary caregivers to severely ill and injured veterans. “Congress opened the program only to caregivers of veterans severely injured, either physically or mentally, in the line of duty on or after September 11, 2001,” said Celli. “It is not open to families of severely disabled veterans injured before 9/11, nor is it open to post-9/11 veterans who have severe service-connected illnesses rather than injuries.”

For Celli, a veteran is a veteran. He said all veterans should receive the same level of benefits for equal service – the Legion has long advocated for expanding program eligibility and ending the obvious inequity it created.

“We have long supported our veteran caregivers by providing accredited representation, advice and education. We created a new Caregiver Coordinator position in our Washington (headquarters) office. We participated in the numerous roundtables conducted during the present review of the program,” he said. “The American Legion is also rolling out a comprehensive caregiver program to our departments and recently passed Resolution No. 24, the Caregiver Program.”

Celli said the burden of ensuring support for these caregivers does not, and should not, fall on the VA alone. The Legion is optimistic that providing expanded support services and stipends to caregivers of veterans, to all eras, is not only possible but also feasible.

“Together, with The American Legion Auxiliary, (the Legion is) building a comprehensive program that is sustainable and replicable, and will be included in the department and post activities and programs through our network of more than 15,000 posts, (Auxiliary units) and (Sons of The American Legion) detachments across the U.S. and abroad,” said Celli.

In terms of reforming the rights and processes related to veterans appeals, Celli said the Legion is proud to support the Veterans Appeals Improvement and Modernization Act of 2017. “This effort will streamline and modernize a program that desperately needs it, while preserving and expanding veterans protections,” he said. “And in the long run, the increased efficiency will save money while providing benefits faster and more efficiently.”

Furthermore, Celli said the Legion believes that benefits and services provided to women veterans should be improved, especially because this growing demographic has consistently been overlooked by the VA for decades.

Although VA has made improvements in women’s health care, many challenges remain. The Deborah Sampson Act, S. 681, would help rectify many issues women veterans face by:

1. Enhancing services that empower women veterans to support each other.

2. Establishing a partnership between VA and at least one community entity to provide legal services to women veterans.

3. Making adjustments to care that VA can provide newborns.

5. Requiring VA to collect and analyze data for every program that serves veterans, including the Transition Assistance Program, by gender and minority status, and require that VA publishes data as long as it does not undermine the anonymity of a veteran.

Celli said The American Legion recommends a change to the bill, which is a separate track to address specific needs of women veterans attending the Transition Assistance Program. "Additionally, (the Legion) request that the Department of Defense transfer contact information of all transitioning women veterans to VA and the Department of Labor. This would provide an opportunity for the VA, DoL and VSOs to follow up with women veterans after separation to offer additional support, programs and services.”

Celli said American Legion Resolution No. 147 calls on the Legion to work with Congress and VA to ensure that the needs of current and future women veteran populations are met. It also calls on VA to provide full comprehensive health services for women veterans department-wide. “Our 2013 report on Women Veterans Healthcare addresses all of the vital components of the Deborah Sampson Act, as well as Senate bill 804 (Women Veterans Access to Quality Care Act),” said Celli. “(That is) why we strongly urge this Congress and the VA to immediately address these issues.”

Read the Legion’s position on other draft bills here.