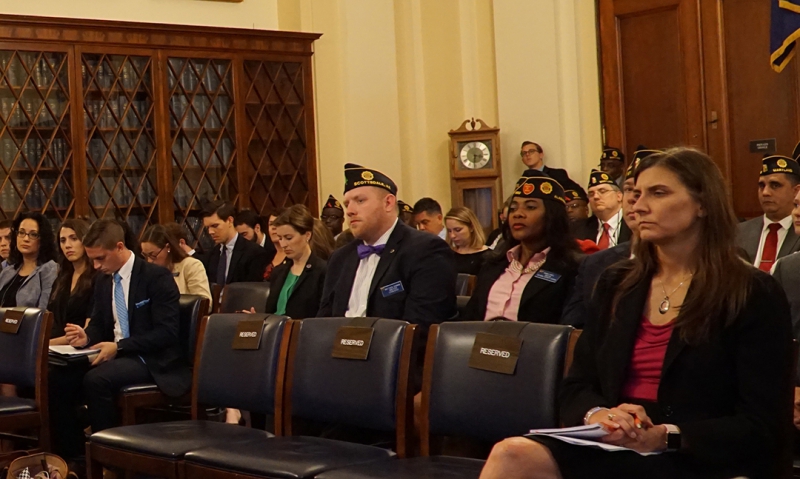 The American Legion’s John Kamin was one of several veterans service organization representatives and members of Congress who testified July 17 in favor of H.R. 3218, the Harry W. Colmery Veteran Educational Assistance Act of 2017.

Kamin, assistant director in the Legion’s National Veterans Employment and Education Division, said that Colmery – an American Legion past national commander who drafted the original GI Bill – was a visionary when it came to recognizing the need for an educational benefit for those transitioning from the military into the civilian world.

“As a World War I veteran, Colmery knew firsthand the challenges of transitioning from war,” Kamin told members of the U.S. House Veterans’ Affairs Committee (HVAC). “He saw the potential for a benefit that didn’t create dependence, but would foster greater citizenship through economic empowerment. A benefit rooted in the idea that the individual, not the government, could decide how and where to use it. A benefit that would challenge the status quo that education was the providence of the wealthy and the elite.”

H.R. 3218 would improve and extend GI Bill benefits granted to veterans, their surviving spouses and dependents. Specifically, it would:

• Remove time restrictions to use the GI Bill, enabling future eligible recipients to use their GI Bill benefits for their entire lives as opposed to the current 15-year timeline; and

• Simplify the benefit for future servicemembers by consolidating the GI Bill into a single program, which would reduce the VA's administrative costs.

The legislation also will:

“Most strikingly is making the GI Bill a ‘forever’ benefit,” Kamin said. “This has the potential to greatly increase GI Bill usage rates by providing servicemembers the flexibility they need to pursue their educational aspirations. As this committee affirms its commitment to veterans’ education, it is for us to rededicate our efforts to refining the GI Bill for the next generation.”

For Kamin, these improvements may seem small but the impact cannot be overstated. “Just as the original GI Bill was beyond any measurement at the time, the bills that this committee passes will have an impact beyond our years – not just on our veterans, but on the country as a whole,” he said.

Kamin said the Legion believes that numerous areas can be improved. He suggested the following:

• Increasing the State Approving Agencies (SAAs) funding from $19 million to a rate of $26 million so that SAAs can effectively perform their oversight responsibilities;

• Empowering our servicemembers and veterans to be informed consumers who can make the best choices they can on how to use their benefits; and

• Developing a solution that would provide GI Bill resources and start-up capital to small business, just as the original GI Bill did.

The legislation is sponsored by every HVAC committee member, is budget neutral, includes provisions that have been proposed and prioritized by VSOs, and unanimously passed the HVAC July 19. It has been referred it to the House floor.

“I can’t imagine a topic more worthy of our attention than ensuring that veterans have the education benefits they’ve earned and deserve,” HVAC Chairman Rep. Phil Roe said. “H.R. 3218 and how we got here, and where we are today, is a shining example of how well Congress can and should work together.”

“This bill, as currently written, would launch a new era for all who have honorably served in uniform and for the nation as a whole,” Schmidt said in a letter addressed to Roe’s office on July 11. “Just as The American Legion did when the original GI Bill was passed in 1944, and subsequent versions were introduced, we will fight for this improved version until it is sent to the president’s desk for his signature. The American Legion will continue to work closely with you to ensure that veterans and their families rally across this country for these improvements.”