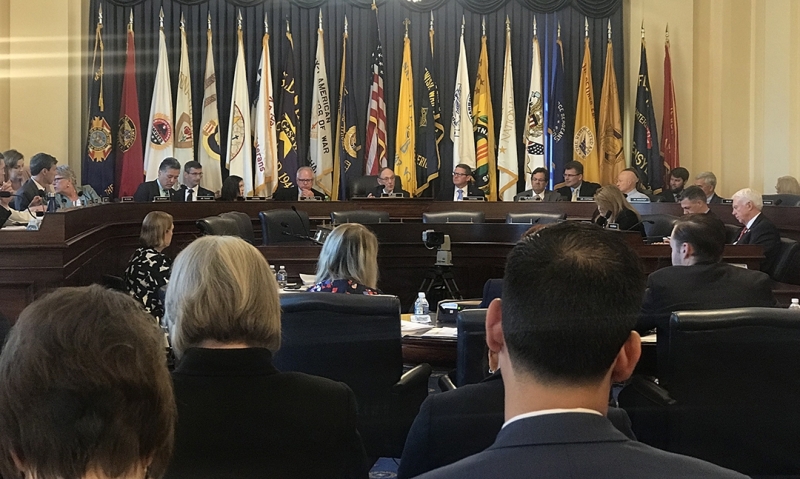 American Legion staff from the Washington, D.C., office gathered May 8 on Capitol Hill to show support for H.R. 5674, the Department of Veterans Affairs (VA) Maintaining Internal Systems and Strengthening Integrated Outside Networks Act of 2018, also known as the VA MISSION Act of 2018.

Before a full room, the House Committee on Veterans' Affairs engaged in bipartisan debate over the bill. The proposed legislation includes provisions to consolidate community care programs into a single, streamlined service; provides sufficient funding to fund the program through the next year; expands comprehensive assistance; strengthens ability to recruit, hire and retain quality medical personnel; and reforms the VA’s health-care infrastructure.

“I could spend all morning talking about how passing H.R. 5674 this morning is the right thing to do for veterans,” said Committee Chairman Rep. Phil Roe, R-Tenn. “Instead, I will quote a letter we received yesterday from 38 military and veteran service organizations (VSOs) that called H.R. 5674 ‘a historic opportunity to improve the lives of veterans, their families and caregivers.’”

The joint statement released before the hearing by VSO leaders, including The American Legion, voiced ardent support for the bill. The statement calls attention to the bill’s key provisions — including extending the eligibility to the VA’s comprehensive caregiver assistance program to include aging and disabled veterans injured before Sept. 11, 2001. Currently, only post-9/11 veterans are eligible for this benefit — leaving family caregivers of veterans injured during World War II, the Korean, Vietnam and Gulf Wars without crucial support.

Roe called out this shortcoming, stating that it shouldn’t matter when or in what conflict a veteran was injured when it comes to receiving this vital benefit.

Since the VA access crisis made headlines in 2014, community leaders have debated how best to address the gaps veterans face when seeking care through VA. VSO leaders unanimously agreed that the proposed legislation would be a major step in addressing these shortcomings.

If the VA MISSION Act fails to be signed into law by Memorial Day, the Choice Program is set to run out of funding June 1. A lapse in funding would result in increased waiting times at VA facilities, decreased access and a loss of continuity of care.

With a vote of 20-2, the VA MISSION Act of 2018 was referred favorably to the full House for a vote.

“This agreement contains several legislative priorities held by this committee — Republicans and Democrats alike — as well as our veteran service organization partners and the Department of Veterans Affairs and the administration,” Roe said. “This compromise is one that we call all be extraordinarily proud to support.”

Concluding the markup, Roe announced his proposal to name the bill in honor of Sens. John McCain, R-Ariz., and Sam Johnson, R-Texas — both of whom are military veterans and will be retiring from Congress this year.

In addition to the VA MISSION Act, 15 other bills were passed favorably out of committee. These bills included H.R. 299, the Blue Water Navy Vietnam Veterans Act of 2017; H.R. 5520, the Veterans Affairs Medicinal Cannabis Research Act of 2018; H.R. 4245, the Veterans’ Electronic Health Record Modernization Oversight Act of 2017; and H.R. 4334, the Improving Oversight of Women Veterans’ Care Act of 2017.