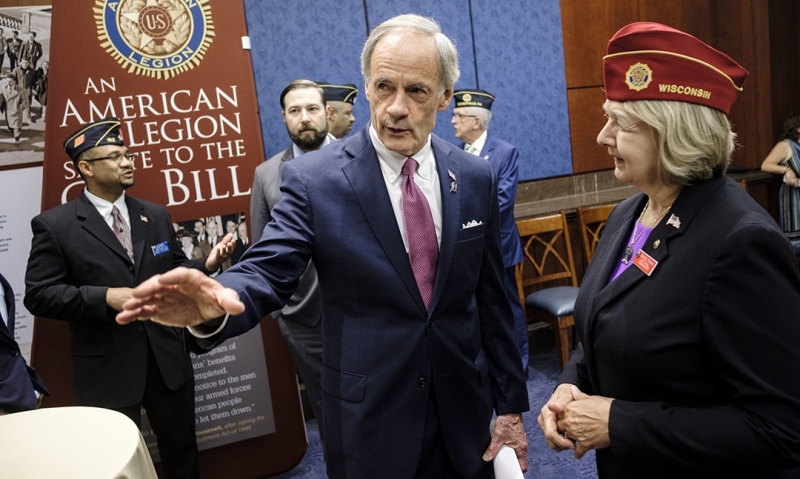 The American Legion hosted a reception at the U.S. Capitol Visitor Center in Washington, D.C., June 20 to commemorate the 74th anniversary of the Servicemen’s Readjustment Act of 1944, also known as the GI Bill of Rights. The legislation enabled nearly 8 million World War II veterans to attend college or vocational school.

National Commander Denise H. Rohan was in attendance to commemorate the 1944 landmark legislation, as well as several members of Congress who recognized the week of June 18-22 as National GI Bill Commemoration Week. Attending the reception were Sens. Tom Carper, Jim Inhofe and Jon Tester, ranking member of the Senate Committee on Veterans’ Affairs; and Reps. Jody Hice, Clay Higgins and Phil Roe, chairman of the House Committee on Veterans' Affairs.

Rohan shared about The American Legion's investment in the GI Bill since its inception, and the benefits it has provided to America's veterans.

“Since the original GI Bill was introduced in 1944, millions of veterans have used these benefits to improve their lives and build their futures. The American Legion helped draft the original 1944 Servicemen’s Readjustment Act that fueled the Eisenhower-era post-war boom and the expansion of higher education and the middle class within American society,” Rohan said. “This is why The American Legion, many congressional leaders, and those who have benefitted from the GI Bill often refer to it as America’s ‘greatest legislation.’ The American Legion continues to work diligently to ensure the GI Bill remains relevant to today’s generation of veterans. We thank Sen. Carper for his leadership in introducing (bipartisan) legislation creating a National GI Bill Week.”

Carper, a Legionnaire and Navy veteran who used the GI Bill to attend the University of Delaware following the Vietnam War, said, “The GI Bill changed the course of history. Millions of returning World War II veterans enrolled in higher education and job training programs and helped usher in an era of broad economic growth in the United States. The GI Bill changed my life, too."

“Investing in a quality education for servicemembers today will pay dividends well into the future,” Tester said. “During GI Bill Week, we honor our veterans and recommit ourselves to ensure they can put their unique skillset and experience to use long after they hang up their uniforms.”