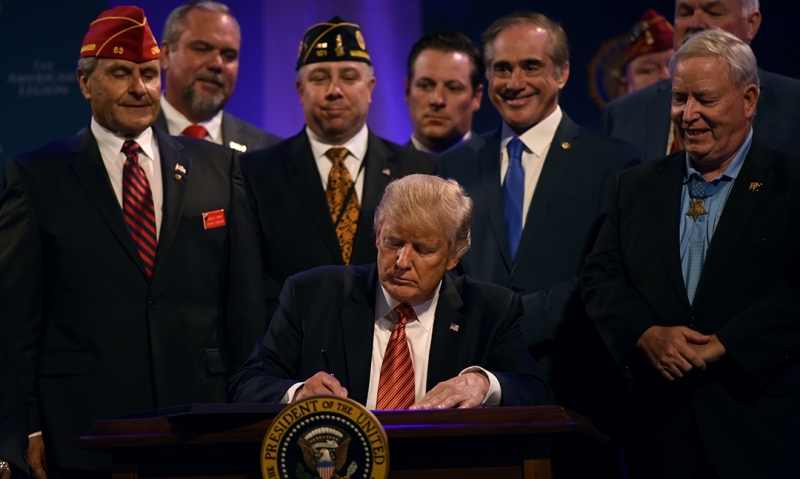 The Veterans Affairs Accountability and Whistleblower Protection Act of 2017, which was passed by both chambers and signed into law by President Trump. The act gives the secretary of VA the authority to rid or demote employees that don't meet the mission of VA.

The Veterans Appeals Improvement and Modernization Act of 2017, which modernized the appeals process at VA. This bill impacts the many veterans who have been waiting years for decisions on their claims and was signed into law by Trump on stage during The American Legion’s 99th national convention in Reno, Nev. The changes streamline the appeals process and force VA to issue a decision on a claim within one year.

John S. McCain III, Daniel K. Akaka and Samuel R. Johnson VA Maintaining Internal Systems and Strengthening Integrated Outside Networks Act, also called the Mission Act, overhauls how veterans can receive their health care. The expansion of the Caregiver Support Program under the Mission Act broadened the program beyond exclusively post-9/11 veterans, ensuring veterans of other war generations have access to the program.

Choice Program. The American Legion worked closely with Congress to ensure the extension of the Choice Program. The program helps veterans access medical care in the private sector when care through VA was not an option or wait times were too long.

The Harry W. Colmery GI Bill — also called the Forever GI Bill — is named after an American Legion past national commander. The bill passed Congress and was signed into law by the president. The Forever GI Bill removes the 15-year cap for using the benefit post-service. Another change added is protection for student veterans against predatory, for-profit higher education institutions.

Electronic health record. The American Legion advocated strongly for electronic health record (EHR) modernization. With the influence and support of The American Legion, Congress approved the necessary funding for the Cerner contract which will manage this new program. VA and the Department of Defense are beginning to implement interoperable EHR that will aide servicemembers as they transition into the civilian sector.

With the new Congress now in session, The American Legion will continue to advocate on behalf of America’s veterans and their families and pursue legislation honoring the legacy of those who have served an securing a future for those to come.