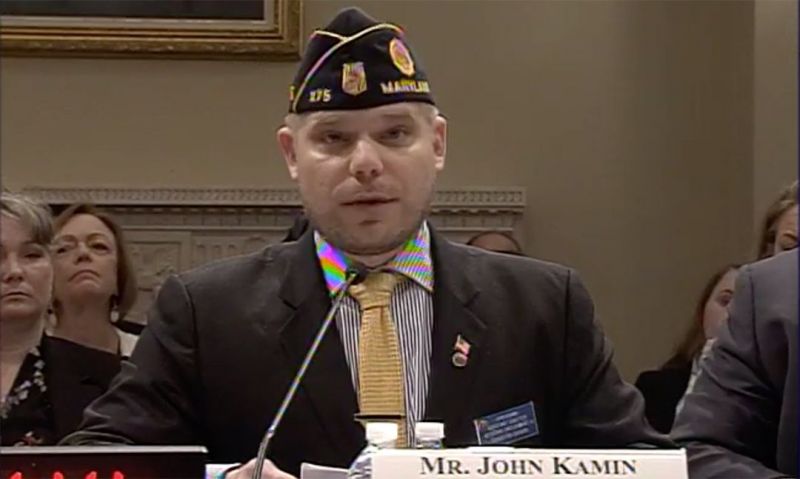 The discussion drafts for the Justice for Servicemembers Act aims to amend Title 38 to clarify the scope of procedural rights of members of the uniformed services with respect to their employment and reemployment rights, and for other purposes. Presently, The American Legion believes the act fails to adequately address and support military personnel returning to civilian employment.

“The Justice for Servicemembers Act is a bill that strengthens the Uniformed Service Employment and Reemployment Rights Act (USERRA) by deeming forced-arbitration motions unenforceable for the purpose of wrongful termination complaints,” Kamin testified.

The case of Marine Corps Col. Michael T. Garrett — who was terminated from his job due to a pending active duty mobilization — was highlighted by Kamin.

“In accordance with section 4323 on enforcement rights with respect to a private employer, Colonel Garrett filed a USERRA violation in District Court,” Kamin said. “His employer filed a motion to compel forced arbitration. After much dispute, the U.S. Court of Appeals for the 5th Circuit ruled that USERRA is not a clear expression of congressional intent concerning the arbitration of servicemembers’ employment disputes. Thus, the Garrett precedent was established on USERRA violations, and hence we ask for your support on the Justice for Servicemembers Act.”

The next issue addressed during testimony was the Navy SEAL Chief Petty Officer William Mulder Transition Improvement Act. The act is the most notable improvement to the Transition Assistance Program and the overall transition process for servicemembers, including an increased focus on career opportunities and entrepreneurship.

“Notable,” said Kamin, “is its authorization of a five-year pilot program that would provide matching grant funds to community providers that offer wraparound transition services to veterans and transitioning servicemembers."

The restructuring of the act requires servicemembers to select a specific career-oriented track for their post-service plans, as well as require them to undergo one-on-one counseling a year before separation to evaluate which transition pathway best suits them.

“The VA faithfully attempted to meet Forever GI Bill deadlines,” said Kamin. “Congress and VSOs attempted to provide sound oversight and support to ensure this outcome. But we failed, and thousands of veterans paid the price in delayed GI Bill payments this past fall semester.”

However, Kamin continued, “we are encouraged by improved outreach and communication on GI Bill implementation.

“It is incumbent upon all of us to take ownership in this success and support Dr. Lawrence in this endeavor, because we have lost the right to disbelief in the event of another GI Bill backlog. Oversight and support must be in real-time and practical, no matter the challenge. That means being transparent about complications and forthright on changes, open to school inputs and adaptive to recommendations. That starts with trust.”