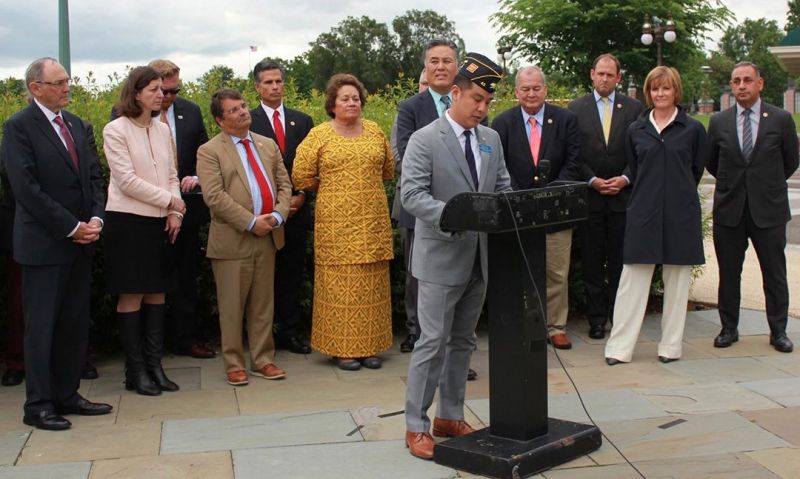 American Legion Director of Veterans Affairs and Rehabilitation Chanin Nuntavong at the press conference before the House vote.

“The American Legion will continue to support this legislation, to include common sense amendments, that will provide the broadest definition of service in the Vietnam War,” American Legion Director of Veterans Affairs and Rehabilitation Chanin Nuntavong said in a press conference ahead of the evening vote. “We hold this firm position because both the law, Procopio, and the science, are on the side of presuming Agent Orange exposure for military personnel who served in the waters surrounding Vietnam.”

“Congress has failed our Blue Water Navy veterans, plain and simple,” House Veterans’ Affairs Committee Chairman Mark Takano, D-Calif., said ahead of the vote. “Today, we will right this wrong. This bill is the quickest and clearest route to delivering benefits to those who served. They have waited long enough.”

Veterans who served in Vietnam between 1962 and 1975 are presumed to have been exposed to Agent Orange if diagnosed with a medical condition associated with the herbicide, according to the Agent Orange Act of 1991. However, this act applied only to veterans who served on land and in Vietnam’s inland waterways, excluding those who served on ships off the coast of Vietnam known as “Blue Water” Navy veterans. H.R. 299 will extend these benefits to the Blue Water Navy veterans.

“We look forward to the day when we stand before you, in celebration, as all 3.4 million Vietnam veterans are made whole,” Nuntavong said. “And they, along with their family members, receive the quality care and benefits they’ve earned from VA.”

H.R. 299 will now go before the Senate for a vote. The legislation previously failed to pass the Senate during the 115th Congress.