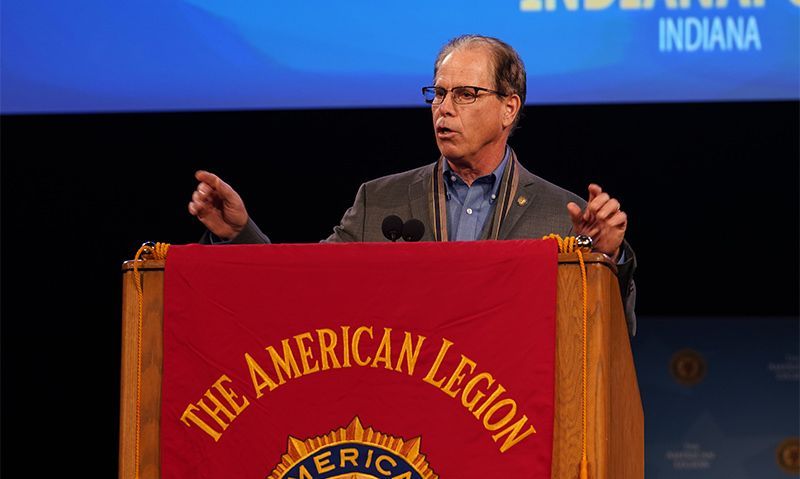 One of the original sponsors of a U.S. Senate resolution honoring The American Legion’s 100 years of serving veterans presented that resolution to National Commander Brett Reistad on Aug. 27.

U.S. Sen. Mike Braun appeared at the 101st National Convention in Indianapolis with a copy of Senate Resolution 263, which recognizes The American Legion as a “cornerstone of life in the United States” and honors the role the Legion has played in the United States “as an inextinguishable beacon of community, responsibility, honor, and service.”

“Organizations like yours … need to make sure that the legacy (of veterans) is not forgotten,” Braun said. “In this day and age, where sacrifice is in the distance, future generations need to understand the true measure of what it takes to be an American. I was proud the lead off author on it (on S.R. 263) along with Sen. Todd Young and several other senators so that we commemorate this anniversary and make sure that legacy has a strong vision in the future.”

Via a video message, U.S. Rep. Andre Carson also honored the Legion and announced that he’s introduced a similar resolution in the House with support of other Indiana representatives. House Resolution 539:

• Honors the vital role The American Legion has played in the United States;

• Celebrates the continued position of The American Legion as an inextinguishable beacon of community, responsibility, honor, and service.

“This iconic organization has a special bond with Hoosiers and Americans,” Carson said. “For 100 years this organization has grown into one of the most influential and impactful nonprofits. It’s helped to improve the lives of countless veterans, servicemembers and many others in communities across the country. That’s something to cheer, this year and every year.”