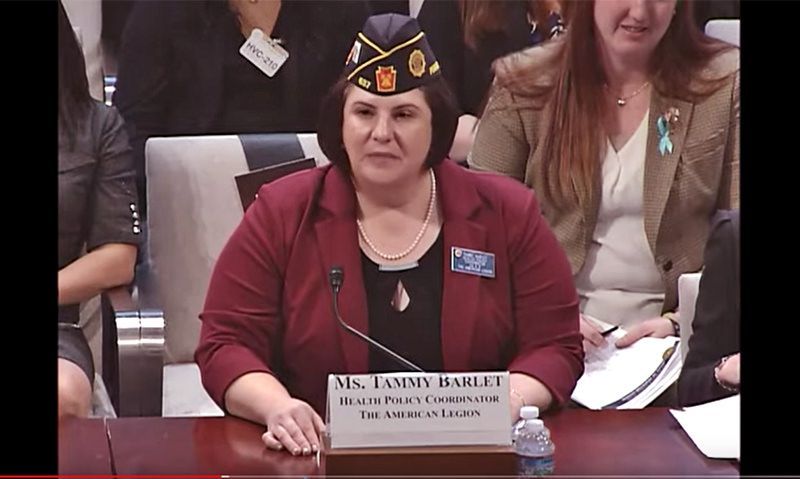 The House Committee on Veteran’s Affairs (HVAC) on February 5 held a hearing before a joint Subcommittee on Oversight and Investigations and the Women Veterans Task Force on the support victims of military sexual trauma (MST) receive by the Department of Veterans Affairs (VA). American Legion Health Policy Coordinator Tammy Barlet testified on behalf of the American Legion.

When Sen. Martha McSally revealed during a March 2019 Senate hearing that she is one of the approximately one in four women serving in the armed forces who report being sexually assaulted during their time in service, she brought back into the public eye the epidemic that has long plagued the military ranks. Military sexual trauma is the term used by VA to refer to experiences of sexual assault or repeated, threatening sexual harassment that a veteran experienced during his or her military service.

The obstacles MST survivors face do not end with active service. "There are veterans who do not return to the VA because they experienced a hostile environment," Barlet testified. "The American Legion believes that our nation's heroes should not suffer at the hands of the institution whose sole mission is to care for them."

Through the System Worth Saving program, The American Legion works to assess the quality and timeliness of veterans’ claims and health-care delivery, as well as provide feedback from veterans about their experiences. During the System Worth Saving visits, staff from The American Legion meet with the MST coordinator for the designated medical center to ensure the facility is in compliance with VA’s MST program.

“Many of the MST coordinators we interviewed stated they work well over the 20 percent of their full-time equivalent allotment, just to ensure they meet the requirements of the directive,” said Barlet, adding that the Legion’s initial assessment found MST coordinators were not afforded the time necessary to properly review a veteran’s file.

Another hurdle faced by MST survivors seeking help is harassment in VA facilities. Studies by the VA Women’s Health Research Network show that women veterans are often subject to harassment at VA facilities. Research found that one in four women veterans face inappropriate or unwanted comments or behaviors when they seek care through VA. The study showed women veterans who reported harassment were less likely to feel welcome at VA, did not feel safe at VA and were more likely to put off necessary medical care.

"It is unacceptable that one in four women veterans experiences sexual or gender harassment at VA facilities," said HVAC Chairman Mark Takano.

The American Legion testified that VA’s #EndHarassment Campaign message of zero-tolerance must be clearly stated to bring awareness, empower bystanders and lay out instructions for reporting incidents, as well as provide support for the victim. The campaign should also follow through with investigations and establish consequences in order to change behavior and culture.

Recommendations made to the subcommittee by The American Legion include:

• Reevaluate and change policy, if necessary, to set a specified amount of excluded time that can be allotted for the development of MST claims.

• Enforce the existing zero-tolerance policy concerning attitude of the rater with regard to MST claims. Any rater violating this policy should face appropriate disciplinary action.

• Enforce that document raters who repeatedly fail to consider markers in their rating decision of MST claims be retrained. If they continue with the same behavior, they should face appropriate disciplinary action.

• Provide resources and remind employees of existing resources they can use for self-care when triggered or experiencing compassion fatigue due to handling MST cases.

• Re-educate VBA employees about immediate healthcare resources at VA facilities and Vet Centers so veterans may begin the path to healing.

• Re-evaluate the duties and responsibilities of MST coordinators and consider a possible increase of the percentage of full-time equivalent.

Advocacy for victims of MST is one of The American Legion's top legislative priorities for the 116th Congress.