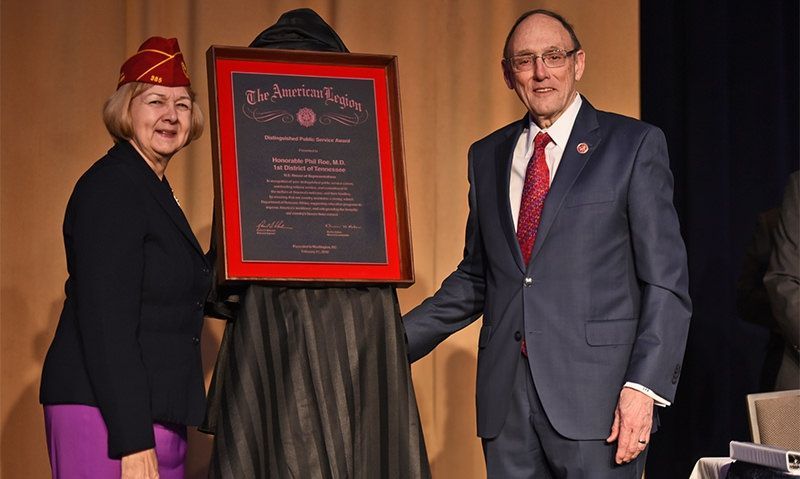 Dr. Phil Roe, R-Tenn., the ranking member of the House Committee on Veterans’ Affairs, is set to retire at the end of the 116th Congress.

"As someone who practiced medicine for over 30 years, I said I would serve five or six terms because I never intended this job to be a second career," Roe said in a January 2020 statement announcing he would not seek a seventh term.

“Under Dr. Roe’s leadership, as both chairman and ranking member, the House Committee on Veterans’ Affairs has been an example of what can be accomplished when partisanship is put aside to do what is right for our nation’s veterans,” said Chanin Nuntavong, executive director of Government Affairs for The American Legion. “We wish Dr. Roe a long and happy retirement.”

The six-term Republican was first elected to Congress in 2008.

“I’m proud of the bipartisan successes,” said Roe in a statement. “They don’t always make the headlines, but they are critical to our nation’s future.

A veteran of the United States Army Medical Corps, Roe is a passionate advocate for veterans on Capitol Hill.

“As a veteran, I was honored to be selected to chair the House Committee on Veterans’ Affairs in 2017. I had one-, three- and six-year legislative goals for the committee: to increase access to care, improve the electronic health records system, review VA assets to ensure an effective use of resources, and bring true accountability to the department. I never could have imagined that we would accomplish all that in my first term leading the committee,” he said.

One of Roe’s biggest successes during his tenure in Congress was the VA MISSION Act, which was supported by The American Legion. The omnibus legislation overhauled health-care choices for veterans and reformed inadequacies in the Department of Veterans Affairs’ (VA) health-care infrastructure. The MISSION Act was signed into law on June 6, 2018.

Roe was presented with The American Legion’s Distinguished Public Service Award at the American Legion’s 2018 Washington Conference. Then-National Commander Denise Rohan praised Roe for being “the tip of the spear in terms of making 2017 an incredible and historic year for veterans legislation.

“From passing accountability at VA to modernizing the appeals process, creating and passing the Colmery GI Bill, and even The American Legion coin bill, Dr. Roe has led quite the distinguished public service career.”

Prior to serving in Congress, Roe ran a medical practice for 31 years in Johnson City, Tenn., where he delivered nearly 5,000 babies. He served as the Johnson City mayor from 2007 to 2009 and vice mayor from 2003 to 2007. He has three children – David C. Roe, John Roe, and Whitney Larkin — and is a proud grandfather, according to his official biography. He and his wife Clarinda live in Jonesborough, Tenn. He a member of American Legion Post 24 in Johnson City, Tenn.