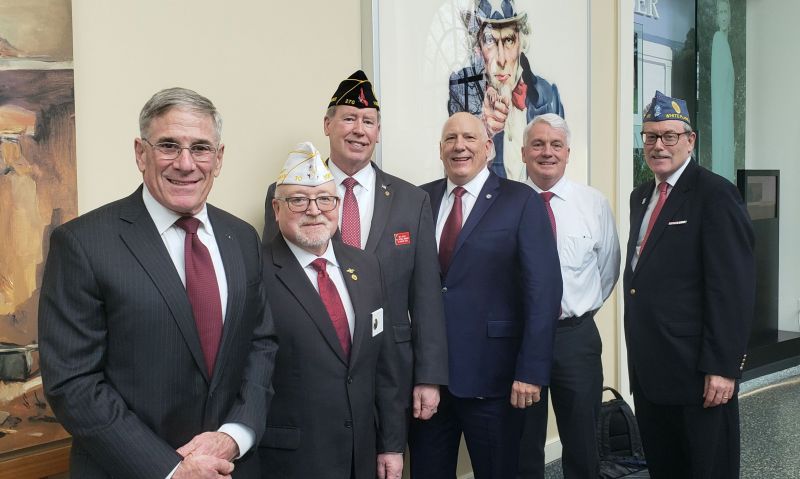 An American Legion-backed effort to preserve memorials dedicated to chaplains at Arlington National Cemetery was introduced this week in the U.S. Senate. The ‘‘Chaplains Memorial Preservation Act’’ spearheaded by Sen. Raphael Warnock, D-Ga., would enable the National Conference on Ministry to the Armed Forces to update the memorials dedicated to the nation’s military chaplains.

“Military chaplains who have made the ultimate sacrifice in defense of our freedoms deserve a final resting place that honors all the parts of their service, both to our country and to the souls of their fellow servicemembers,” said Warnock, who is also a pastor.“ I am proud to stand with countless veterans and clergy who’ve long worked to advance this important conversation, and I am proud to introduce bipartisan legislation with Sen. (John) Boozman to memorialize these brave chaplains. This legislation is the least Congress can do to properly honor the calling of these military chaplains, and their commitment to serve a mission greater than themselves.”

Rabbi Harold Robinson, who served in the United States Navy as a chaplain and retired at the rank of rear admiral, played a key role in the dedication of the monument honoring Jewish chaplains and is leading the efforts to preserve the memorials. He spoke to the bravery and selfless service and sacrifice of those who serve in the Chaplain Corps of the U.S. Armed Forces.

“Our military chaplains go into harm’s way with only faith as their armor,” he said. “The roll call of willing sacrifice recorded on the monuments there stir and elevate the soul. Knowing their loved one’s sacrifice is memorialized brings succor to those who love them and miss them still and consolation to the communities of faith that sent them forward with hope and prayer. We owe their memory and the grief of those who knew and loved them no less”.

American Legion Past National Commander Brett Reistad applauded the introduction of the legislation.

“These chaplains gave their lives in service to their country and deserve to be memorialized and symbolically rest among the warriors they served,” he said.

Ken Kraetzer, a member of Sons of the American Legion Squadron 135 in New York, has advocated for commemorating the service of the nation’s military chaplains for more than 10 years.

"The monuments and names remembered on Chaplains Hill recognize the selfless and heroic service of military chaplains,” said Kraetzer. “With the passage by Congress of this legislation, we will be able to honor 26 chaplains who died during service in Korea, Vietnam, the Cold War, Iraq and Afghanistan. We will never forget that three of the Army chaplains we seek to honor remain missing in action.”