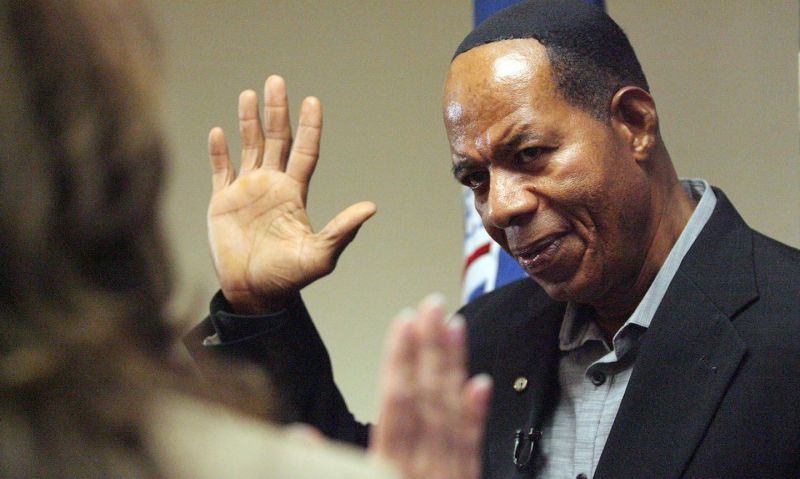 Randolph Kelly,64, gets sworn in by Norma Limon Field Office Director at the Citizenship Ceremony US Citizenship and Immigration Services field office in Harlingen, Texas. (Photo by Delcia Lopez )

For more than 100 years, The American Legion has advocated for those who seek a legal path toward naturalization — the process by which a non-citizen of this country may acquire citizenship — and believes strongly in assisting those who do. The American Legion first weighed in on the issue in 1919 by passing a resolution a resolution at the first national convention which recommended “that American Indians who honorably served in the Army, Navy, or Marine Corps of the United States during the World War be given the full rights of citizenship.”

“It has been reported from citizenship organizations, national and local news sources, and members of Congress that hundreds, possibly thousands, of veterans have been deported,” wrote Ariel De Jesus, a senior national security policy adviser for The American Legion. “Many of those deported who were interviewed said they were led to believe that citizenship was automatically granted due to their service.”

However, the process was not that simple. The branches of the Armed Services needed to work with U.S. Citizenship and Immigration Services (USCIS) to begin the process of establishing citizenship for the servicemember.

This resulted in many veterans being deported as a result of minor, non-violent or substance related crimes. This could result in veterans being barred from naturalization for life, despite meeting all other criteria for citizenship.

Sen. Tammy Duckworth, D-Ill., is a leading advocate in protecting veterans from deportation and helping those who have already been deported remedy their situation. She testified during the hearing about the hurdles servicemembers face during the path to citizenship.

“The time has come for Congress to demonstrate our loyalty and service to the immigrant servicemembers and veterans who have demonstrated their loyalty to the Constitution,” said Duckworth. “These are proud Americans who simply wish to become citizens of the nation whose uniform they’ve proudly worn in service.

“Some of our servicemembers are fighting overseas only to fear that they – or a loved one – could be detained and deported by the same country they are defending. Or worse, some don’t even realize they’re not citizens — and like many Americans, mistakenly believe that citizenship automatically accompanied honorably serving in uniform,” she added.

The American Legion called this a “failure of all those involved” if a servicemember who served honorably didn’t attain their citizenship by the end of their time in service.

Immigrants who entered the U.S. Armed Forces in the Military Accessions Vital to the National Interest program have experienced continuous rule changes. Those who entered the military through the program have highly specialized skillsets such as physicians or fluency in certain languages. The ambiguity in the process left many at risk of losing their legal status and being deported while waiting on the final approval of their application and security clearances.

“Together these resolutions urge Congress to pass legislation to stop deporting veterans, ensure immigrant servicemembers can expeditiously become citizens and bring deported veterans home,” wrote De Jesus. “The American Legion’s position is clear. These brave men and women served our nation honorably. It is only right that we recognize their service with the pathways to citizenship they deserve.”

Sen. Alex Padilla, D-Calif., agreed. “We must do so much more as a country for military family members,” Padilla said. “We must examine the cases of honorably discharged deported veterans and their families and allow them to apply to return home. Members of our armed services and their families deserve a pathway to citizenship that accounts for their service. There is no question that building that path is a matter of military necessity,” he added. “Our Armed Forces rely on the bravery, dedication and skills of immigrant recruits.”