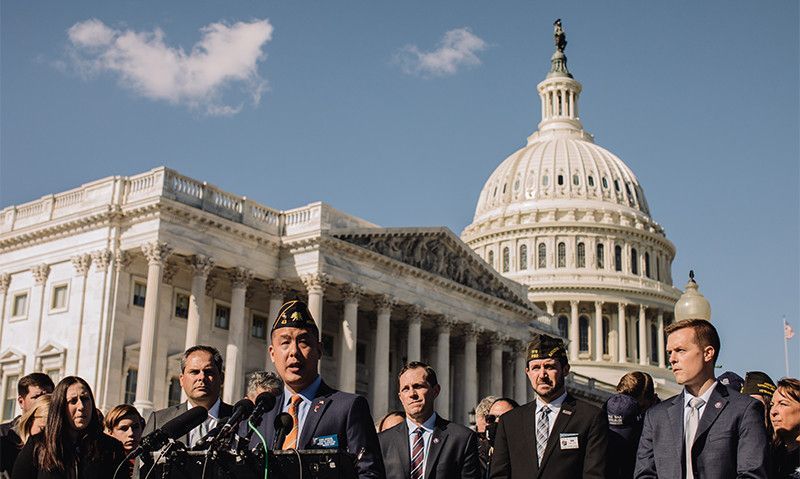 American Legion Executive Director Chanin Nuntavong joins members of Congress during a press conference at the U.S. Capitol Nov. 3 to urge the U.S. Senate to include the language for the “Global War on Terrorism Memorial Location Act” in its version of the National Defense Authorization Act.. Photo by Jason Andrew

The American Legion joined veterans’ advocates, lawmakers, wounded warriors and Gold Star families in front of the U.S. Capitol on Nov. 3 to call on Congress to pass legislation authorizing the construction of a Global War on Terrorism Memorial on the National Mall.

The “Global War on Terrorism Memorial Location Act” was introduced earlier this year by U.S. Sens. Joni Ernst, R-Iowa, and Maggie Hassan, D-N.H. Their bill now has the support of 49 senators.

Chanin Nuntavong, executive director of Government Affairs for The American Legion, highlighted the sacrifices of the 3 million veterans who have served in the Global War on Terrorism. The gift of freedom, he said, is preserved by the men and women who fought for something much greater than themselves.

“The warriors, whose sacrifice we admire every day, either laid down their lives or faced overwhelming dangers – not to uphold one moment, but one nation,” said Nuntavong, who served in the Marine Corps. “6,923 faces and names line hallways of military posts, and are etched on marble and granite across the country. They serve as reminders that bear the scars of our fallen. 53,267 gave their blood, parts of their body, and most of them, their spirit. Veterans of the Global War on Terrorism account for more than half of the severely disabled veteran population.”

Approximately 1.8 million veterans live with a recognized disability from the Global War on Terrorism. And many more live daily with the unseen scars resulting from an entire generation spent at war.

Three million veterans may have served in the Global War on Terrorism, Nuntavong said, but many times that number have paid the cost of war.

“They are the parents, spouses, children and friends. They were the ones left to cope with their loved ones' absence, mourn their deaths, or greet the person who returned – changed.”

A national memorial for Global War on Terrorism veterans would serve as a place to gather, remember and reflect. Veterans of past wars often did not live to see the completion of the memorials designed to honor their service and sacrifice. This does not need to be the case for the Global War on Terrorism generation as it begins to heal.

“The motivation that binds us – those of us who have worn the cloth of this nation – is our respect for, and commitment to, those who have chosen to put their lives before others,” Nuntavong said.

Ernst says she will not rest until this memorial becomes a reality on the National Mall.

“Now is the time to honor the servicemembers, fallen soldiers, their families and all those impacted by the Global War on Terrorism,” she said.

"As we mark 20 years since Sept. 11, this year has refocused the nation's attention on our veterans' service and their stories,” she said. “Now, more than ever, the service community needs a place where we all can come together to reflect, heal, and honor the sacrifices made by this generation of warriors.”