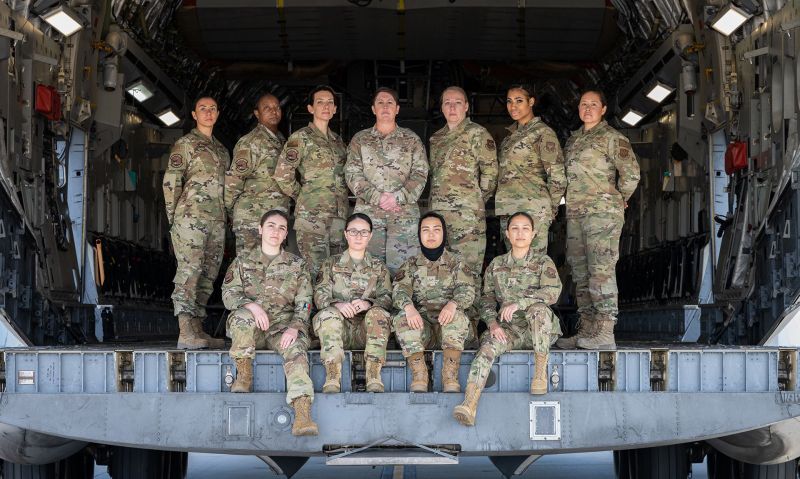 Celebrating Women's History Month with the women of the 452nd AMXS.

The American Legion saw significant wins for the nation’s women veterans in 2021.

Women veterans are the fastest growing demographic to serve in the military and also to enroll in the Department of Veterans (VA) health-care system. As of 2021, women accounted for 2 million of the nation’s veterans. That number is expected to reach 2.2 million by 2046.

However, women still face significant barriers when seeking VA health-care benefits. These include not identifying as a veteran, not being recognized as a veteran by VA employees, lack of awareness and understanding of VA health-care benefits and perceptions that VA is an “all-male” health-care system. Other barriers include women veterans being more likely to experience mental health issues and military sexual trauma, as well as chronic pain management and treatment for musculoskeletal conditions.

The American Legion has emphasized that a veteran is a veteran, and all veterans deserve equity in care regardless of gender. Among the highlights of legislation from 2021 that improves the lives of women veterans:

The Protecting Moms Who Served Act is an American Legion-backed piece of legislation that improves maternal health care for veterans. Championed by U.S. Sens. Tammy Duckworth, D-Ill., Susan Collins, R-Maine, and U.S. Rep. Lauren Underwood, D-Ill., it sailed through Congress. The legislation passed the Senate by unanimous consent and the House of Representatives by a vote of 414 to 9.

The bill calls for a $15 million investment from VA to upgrade maternity care for women veterans. Additionally, the law commissions the first-ever comprehensive report on maternal mortality and severe maternal morbidity among pregnant and postpartum veterans, with a focus on racial and ethnic disparities in maternal health outcomes for veterans.

The American Legion seeks continued improvements in VA’s reproductive care and ensuring that the needs of women veterans are being met through comprehensive health services. Closing the gaps in areas of newborn, maternity and reproductive care ensures that women seeking health care through VA feel that it is a system built with them in mind.

President Biden signed the bill into law on Nov. 30.

The Deborah Sampson Act is a provision in the Johnny Isakson and David P. Roe, M.D. Veterans Health Care and Benefits Improvements Act of 2020, which was signed into law on Jan. 5.

The legislation paved the way to improving care for women veterans within the Veterans Health Administration (VHA). The law established an Office of Women’s Health within VHA to oversee women’s health programs which is responsible for ensuring standards of care for women veterans are being met by the VHA. Additionally, the law mandates that every VA health-care facility has a women’s health primary care provider.

“The American Legion wants every woman veteran who walks through the doors of a VA medical facility to feel that it was designed with them in mind and no longer has the looks of a ‘For Male’ only building,” The American Legion said in spring 2021 testimony before Congress. “Passage of the Deborah Sampson Act of 2020 was a major step forward in facilitating changes to the previously established male-oriented infrastructure of VA health-care. We expect it to be a catalyst in the movement toward equity for women veterans.”

While both the Protecting Moms Who Served Act and the Deborah Sampson Act have now been signed into law, there is more to be done. While VA has made significant advancements in women veterans health care throughout the VA health-care system, there is still room for improvement to ensure VA has care models and standards that are gender-specific and culturally competent.

In his recent testimony before a joint session of the Senate and House Committees on Veterans’ Affairs, American Legion National Commander Paul E. Dillard highlighted four issues in written testimony that Congress must address:

·       Providing timely oversight of legislation, which has been signed into law, that impacts women veterans.

“Women have voluntarily served in every war since the American Revolutions,” stated the testimony. “They have stood shoulder-to-shoulder with their male counterparts, filling roles critical to our country’s national security.”

VA must continue to plan now for these demographic shifts and ensure that women veterans are provided high-quality care and resources they have earned.