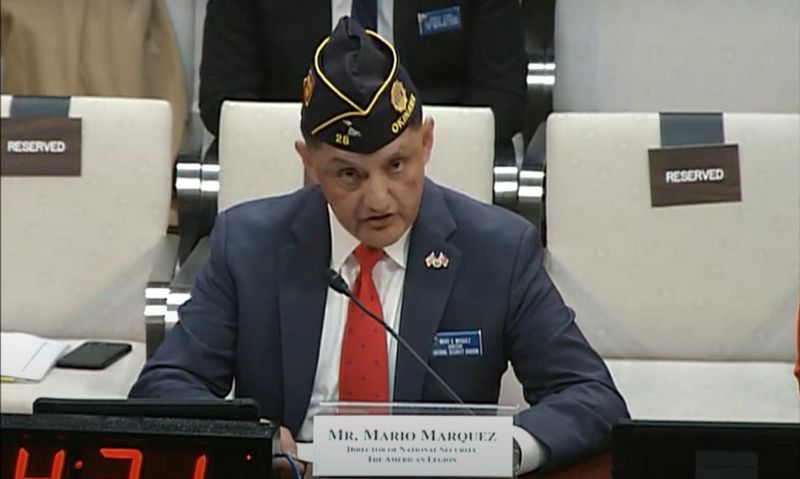 For Mario Marquez, director of The American Legion’s National Security Division, his March 29 testimony before Congress was especially meaningful.

Marquez, who testified on pending citizenship for service legislation, immigrated to the United States with his family from Mexico in 1974.

“I was raised to appreciate the opportunities this nation could provide us in the form of the American Dream,” he told lawmakers. “I felt that as the eldest son, it was my duty to take the oath ‘to protect and defend the Constitution of the United States of America against all enemies, foreign and domestic.’”

Marquez enlisted in the Marine Corps in 1989. He served as a Landing Support Specialist, Drill Instructor, Combat Service Support Chief, Company Gunnery Sergeant, Operations Chief, First Sergeant and Sergeant Major. The pinnacle of his career was serving as the III Marine Expeditionary Force Sergeant Major, the largest overseas-positioned Marine Corps combat force. He retired in December 2020 after more than 31 years of service.

During his time in the Marine Corps, Marquez became a naturalized U.S. citizen through his military service.

“While my military career is filled with fond memories that my family and I are proud of, I would be remiss if I did not address the difficulties experienced when going through various stages of the naturalization process,” he said.

Marquez detailed his own struggles with the naturalization process. From intense deployment schedules, overseas postings, hours-long drives to immigration offices, cancelled or missed appointments and lost paperwork, he and his family struggled for nearly three years as they fought to obtain his citizenship. Once he became a naturalized citizen, Marquez and his wife were able to apply for her permanent residency. They struggled through the process for another four and a half years.

He is not alone in his experience.

That is why for more than 100 years, The American Legion has advocated for those who seek a legal path toward naturalization. Non-citizen immigrants have served in the U.S. military in every conflict since the nation’s inception. Approximately 760,000 have gained American citizenship through military service over the last 100 years. Nearly 24,000 non-citizen immigrants are currently serving in the U.S. military and 5,000 join every year.

“My story is but one example of what are likely thousands of stories that servicemembers, veterans and their families go through in their journey toward achieving the American Dream, to becoming a citizen, and for some, returning to America after being deported,” he said.

The process has become even more convoluted in the last few years as citizenship assistance programs have faded from military bases. U.S. veterans from other nations are serving honorably – and then being discharged as resident alien non-citizens.

“They come out confused,” he added. “Why did their service not bring them citizenship, let alone expedited citizenship they believe was promised to them? And then, in the worst cases, they are deported and disconnected from the VA benefits they earned. The American Legion proudly supports the Veteran Deportation Prevention and Reform Act and the Honoring the Oath Act that addresses naturalization during service and protects non-citizen veterans and their families from unwarranted deportation.”.

“No veteran should be treated as a second-class veteran,” he told the subcommittee. “That means if you served our country — and you are eligible — you should remain in this country. They risked their lives for our country, fought for our country and they deserve and earned the right to stay in our country.”

In addition to testifying on citizenship for service, The American Legion weighed in on other legislation.

• H.R. 6064 directs the Secretary of Veterans Affairs (VA) to seek to enter into an agreement with the National Academies of Sciences, Engineering, and Medicine for a review of examinations for individuals who submit claims for compensation for mental and physical conditions linked to military sexual trauma (MST).

The review would determine:

*Whether certain conditions linked to MST should require a mental health and physical health examination referral.

*What credentialing and training are necessary for disability examiners to complete exams related to mental and physical health conditions linked to MST, such as sexual and pelvic dysfunction, musculoskeletal disabilities (e.g., neck injury), and cardiovascular conditions.

*The necessity of internal pelvic exams and alternatives if the veteran does not wish or cannot complete such an exam.

The American Legion supports this legislation through Resolution No. 18: Veteran Military Sexual Trauma (MST) Claims Training, which mandates VA analyze MST claims volume, assess the consistency of how these claims are adjudicated, and determine the need for additional training on

“The National Academies of Sciences, Engineering, and Medicine is a premier organization that we trust and frequently rely on for evidence and research that we use in our testimonies,” Marquez testified. “They have been involved in several VA initiatives and assessments, specifically the presumptive disability process and we believe that their experience and outside point of view while being experts in the field will enhance the required training and credentialing” of the MST claims process.

• H.R. 6131, the Veterans Disability Claims Notification Improvement Act, would give VA the authority to provide electronic notice for communications related to a veteran’s disability benefits claims, expands the statutory definition of “notice” to include communications issued through electronic and paper means. Additionally, it would give veterans the option of receiving notices either electronically or through the mail regarding their disability benefits claims.

Current law requires that VA physically mail certain communications. This, The American Legion says, is less secure and timely than alternative forms of communication and was found to be especially unreliable as mail service faltered during the COVID-19 pandemic.

“Any process that can expedite the disability claim process and make the time from submission to receipt of benefit can only benefit the claimant. We are in full support,” Marquez told lawmakers.

The American Legion supports this legislation through Resolution No. 123: Increase the Transparency of the Veterans Benefits Administration’s Claim Processing.