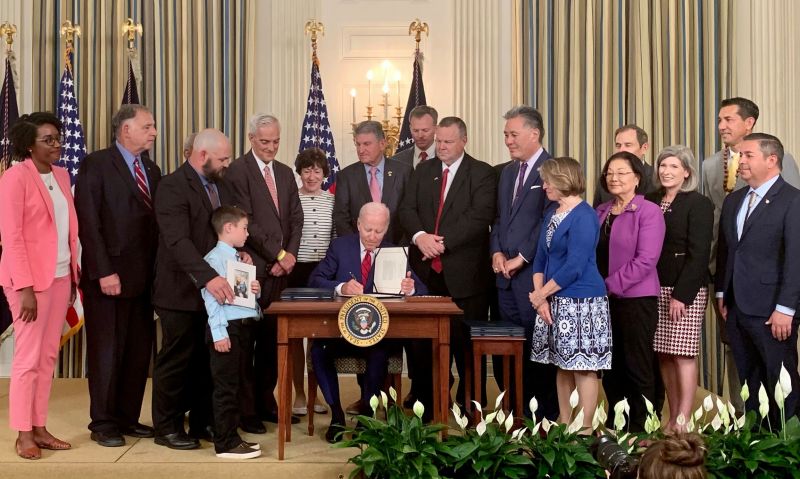 Among the goals Biden laid out in his Unity Agenda during his first State of the Union address is supporting the nation’s veterans.

“Today, our administration is delivering on that agenda,” the president said. “In just a moment, I’ll be signing nine different bills with overwhelming bipartisan support that improve care for our veterans and honor their service and their sacrifice.”

The Dr. Kate Hendricks Thomas Supporting Expanded Review for Veterans in Combat Environments Act expands eligibility for Veterans Health Administration mammography screenings to veterans who served in certain locations during specified periods, including those who were exposed to toxic substances.

The bill is named in honor of Dr. Kate Hendricks Thomas, a Marine Corps veteran. In 2018, Thomas was diagnosed with three different types of stage 4 breast cancer believed to have been caused by burn pit exposure during her service in Iraq. Following her diagnosis, Thomas fought not only her own health care, but became a champion advocate for veterans suffering from illnesses caused by toxic exposures.

Thomas passed away on April 5, 2022, leaving behind a husband and young son. She was 42 years old.

The other bills, the president said, focus on the success of a veterans’ future.

“We’re going to strengthen the oversight of the VA’s activities so veterans get the care they deserve, and restoring educational assistance benefits so veterans displaced by COVID-19 can continue to gain new skills to meet the demands of a changing workforce.

“We can never fully repay the debt to all of you. But I promise that my administration will always have your back. I made that commitment when I ran, and I commit that now. And the men and women sitting before me made a similar commitment. We mean it.”

The nine bills signed into law are: