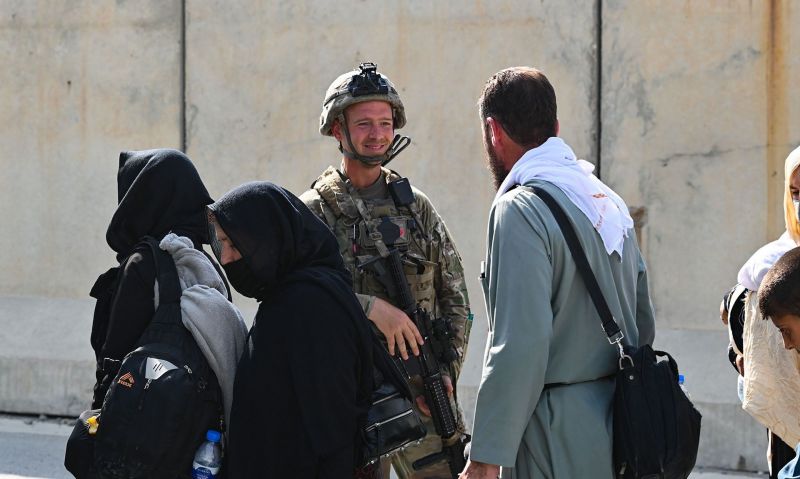 Paratroopers assigned to the 1st Brigade Combat Team, 82nd Airborne Division, based out of Fort Bragg, N.C., facilitate the safe evacuation of U.S. citizens, Special Immigrant Visa applicants, and other at-risk Afghans out of Afghanistan as quickly and safely as possible from Hamid Karzai International Airport in Kabul, Aug. 22, 2001.

In the year since the withdrawal of U.S. military forces from Afghanistan, the United States has welcomed more than 76,000 Afghan evacuees into the country. They include human rights and political activists, women who served in the government and armed forces, those who served alongside American troops and others deemed to be at immediate risk.

The evacuation was the largest effort since the Vietnam War. While many evacuees reached safety inside the United States, tens of thousands of U.S. allies remained. Their service alongside American forces made them — along with their families — targets for retribution as the government crumbled and the country fell back under Taliban control.

Days before the first anniversary of the U.S. withdrawal from Afghanistan, legislation was introduced in both chambers of Congress that could provide those 76,000 Afghan evacuees in the U.S. with a pathway to permanent residency. Many are eligible for asylum or special immigrant visas (SIV) due to the critical assistance they provided to the U.S. during 20 years of war in Afghanistan.

Despite being eligible for these programs, their futures remain uncertain. Both the SIV and asylum processes are faced with steep backlogs.

The American Legion-supported Afghan Adjustment Act of 2022 would:

• Establish a pathway to permanent legal status for Afghans brought to the United States on a temporary humanitarian status by allowing additional vetting to apply for permanent legal residency. This includes those who supported the U.S. mission in Afghanistan over the past two decades.

• Expand the SIV program to include four previously omitted groups, including the Female Tactical Teams of Afghanistan, the Afghan National Army Special Operations Command, the Afghan Air Force and the Special Mission Wing of Afghanistan.

• Establish a task force to develop and implement a strategy for supporting Afghans outside of the United States who are eligible for SIV status and require the Department of State to respond to congressional inquiries about SIV applications.

Rep. Jason Crow, D-Colo., served three combat tours in Iraq and Afghanistan as a U.S. Army paratrooper and Army Ranger. He says the bill is vital to securing the futures of these evacuees in the U.S.

“In Iraq and Afghanistan, I worked closely with local translators and contractors who were critical to our safety and the success of our mission,” Crow said. “For over a year, I’ve been proud to lead efforts to honor our promises and protect Afghan partners who aided the US mission and other at-risk Afghans. The Afghan Adjustment Act is an important next step to get vulnerable Afghan families to safety and ensure they can lead productive lives here in the United States.”

“Giving our Afghan allies a chance to apply for permanent legal status is the right and necessary thing to do,” said Sen. Amy Klobuchar. D-Minn. “This bipartisan legislation will help provide these newly arrived Afghans who have sacrificed so much for our country with the legal certainty they deserve as they begin their lives in the U.S. It’s important to do what we can to help our Afghan friends find stability, opportunity and community in their new home.”