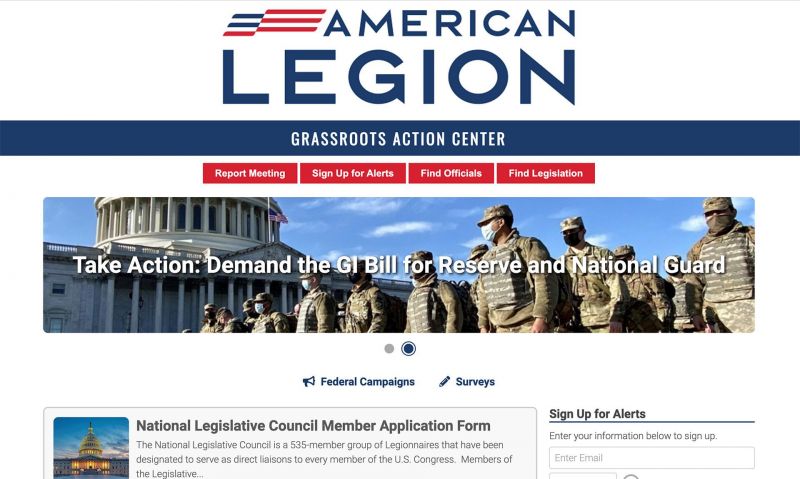 How Legionnaires can make their voices heard on Capitol Hill through the Legion’s Grassroots Action Center and develop their own local action networks was the topic of discussion for the Training Tuesday session Nov. 29.

“This summer many of you participated in our campaign to pass the PACT Act (The Sergeant First Class Heath Robinson Honoring our Promise to Address Comprehensive Toxics Act), in which Legionnaires sent over 35,000 messages to Congress, calling for comprehensive coverage for veterans suffering from toxic exposure,” said Rick Oertel, Department of Virginia commander and National Legislative Council chairman, during the Training Tuesday session. “We lived history, and we wrote another chapter in the story of American Legion advocacy for veterans and reasserted our presence as America’s most powerful voice for veterans.”

John Kamin, a legislative associate in the Legion’s Washington, D.C., office, was the main presenter for  Training Tuesday. He shared how Legionnaires can support the Legion’s legislative priorities, and make their voices heard on Capitol Hill through digital advocacy while engaging others to do the same. Kamin said that nearly 41,000 Legionnaires and other veteran advocates receive action alerts from The American Legion on important legislative issues that the Legion is advocating for. “This number jumped by 20,000 through the PACT Act alone,” Kamin said. Sign up for the action alerts.

He also encouraged Legionnaires to draft a plan on how to encourage more people to sign up for action alerts, engage in Legion legislative priorities and participate in local advocacy campaigns. This can be done through social media – Facebook, Twitter and Instagram – sending emails or text alerts through various texting programs, such as EZ Texting.

“Instagram is the most popular social media platform. It is the preferred media for storytelling,” Kamin said. “It’s going to get you your highest views. It’s a place for telling your story, establishing a brand and garnering interest.”

There are several bills featured on the Grassroots Action Center that the Legion supports and calls on Legionnaires to contact their representatives to pass. A few of these bills include the:

- Guard and Reserve GI Bill Parity Act would expand eligibility for the Post-9/11 GI Bill to count every day that a servicemember is paid and in uniform toward benefit eligibility.

- Veteran Service Recognition Act would protect non-citizen veterans from deportation and ensure that they and their families would still receive the benefits they earned if they are deported. This bill also expedites the process of naturalization for our non-citizen servicemembers.

- STRONG Veterans Act of 2022, modeled after the Legion’s Buddy Check program, the bill would direct VA to establish a “Buddy Check Week,” provide educational opportunities, materials and references for veterans to learn how to conduct personal wellness checks, as well as require increased resources for the Veterans Crisis Line to handle any potential increased usage during the designated week.