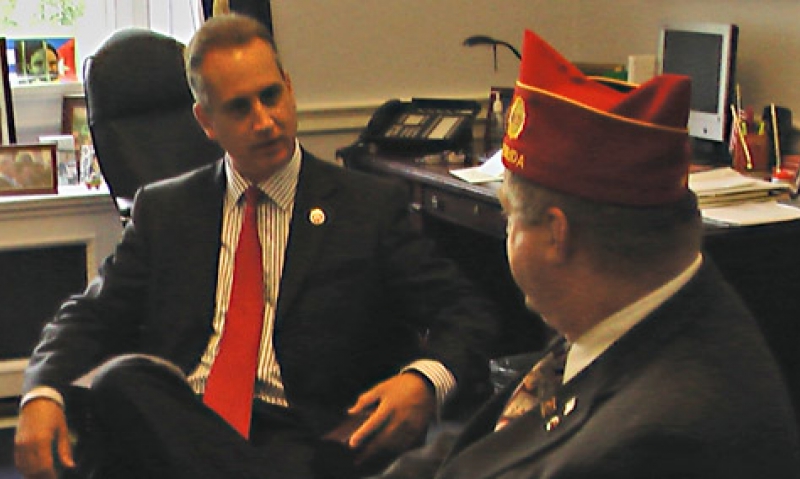 American Legion National Commander Clarence Hill sent a message in Washington on Wednesday that he wants delivered in communities across the nation: "Lawmakers will listen politely to me and my professional staff, but they will hear your message."

Hill was urging members of The American Legion's National Legislative Commission to communicate clearly and frequently with their congressional representatives and senators on issues affecting veterans. "As members of the National Legislative Commission, many of you are the most powerful voice with your congressman, as their constituent, that The American Legion has. The information you get today and tomorrow is wasted unless you share it back home, because we have plenty of folks willing to fight the good fight."

Topping the commander's legislative priority list is VA health care. Hill said VA "is now the national role model for the best health care" in the country and deserves timely funding. The American Legion has led the legislative campaign to convince Congress that VA needs advance funding for medical services. The Veterans Health Administration has rarely started a new fiscal year with an approved budget in the past two decades. Advance funding would assure on-time budgets. Hill said that VA Secretary Eric Shinseki has his budget request in on time for next year's appropriations, and the advance funding bill has passed the House and the Senate but now goes to conference committee to work out differences..

Hill urged Legislative Commission members as they prepared to meet with their congressional delegations to thank them for their support of advance VA funding and to reinforce its need in a time of fast-changing VA health-care demands.

Dean Stoline, assistant director of the Legion's Legislative Division, reinforced the urgency of getting legislation passed that would advance VA health-care funding permanent. He said the Legion and other veterans service organizations have been working on this issue for eight years. "It is critical that, when you're on the Hill, you support advance appropriations. Press for the appropriations - we're trying very hard to get it done now."

"What we will do here is especially important, especially now," National Commander Hill said.

K. Robert Lewis, chairman of The American Legion Veterans Affairs & Rehabilitation Commission, reiterated the organization's key policy goals for veterans health care and national health-care reform: to ensure sufficient, timely and predictable funding; to enable VA to collect from Medicare and Medicaid; to allow all veterans to enroll in VA's health-care system; and to avoid eliminating any VA benefits under any future national health-care reform.

"Nearly one-half of the VA population is Medicare-eligible," Lewis said. "But VA is currently prohibited from collecting such payments. Veterans contribute to Medicare throughout their lives, but they cannot use them at any VA medical facility." He said the estimated revenue VA could get from Medicare reimbursement ranges from $2 billion to $4 billion annually.

Lewis urged the Legislative Commission to support a measure introduced July 28 by Rep. Bob Filner, D-Calif., that would allow VA to bill Medicare and Medicaid for medical treatment of veterans who are participating in those programs. "Why is this important to our veterans?" Lewis asked. "Because the growing demand for medical services requires more streams of revenue."

Other Legion priorities, Lewis said, are to ensure a seamless transition from DoD to VA health care, focus on long-term care needs of America's aging veterans, and to support grants that provide shelter to homeless veterans and their families.

Veterans education benefits, especially in light of the Aug. 1 launch of the Post-9/11 GI Bill, are another high priority in Washington for the Legion. American Legion Economic Commission Chairman Dan Dellinger said, "We're seeing there's a backlog of eligible participants at universities - about a 40-percent backlog at this time."

Whereas GI Bill education benefits applications previously took about 24 days to process, the new ones are taking six to eight weeks. Commission members were asked to closely monitor any GI Bill backlog problems in their states.

Also on the Legion's legislative radar is VA's persistent challenge to reduce a benefits claims backlog, the size of which is deep in the hundreds of thousands. Stoline said VA claims the number is about 300,000; The American Legion says is at least 800,000. "It takes VBA an average of about 4.6 hours to look at a case, but almost five years to get it resolved," Stoline said.

The meeting, conducted at the Washington Hilton, was facilitated by Jim Koutz, chairman of The American Legion National Legislative Commission.