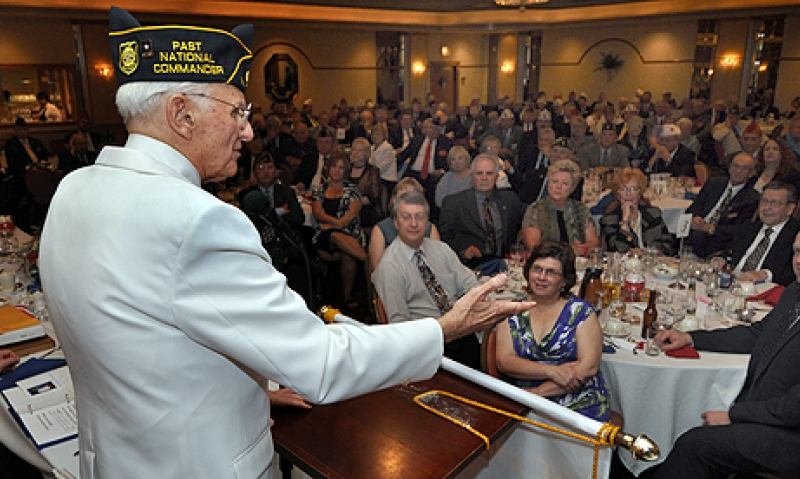 May 1 was a good day for American Legion Past National Commander John H. Geiger.

Daniel Grant, director of the Illinois Department of Veterans' Affairs, named Geiger the "Veteran of the Month." May 1 was proclaimed "John H. Geiger Day" by Illinois Gov. Pat Quinn. And more than 300 of Geiger's family, friends and fellow Legionnaires from across the country gathered in Chicago Saturday to pay tribute to one of the Legion's most revered national commanders.

Speaker after speaker extolled Geiger's contribution to the Legion and the nation.

"John H. Geiger is not just one of 102 who have been elected to, or earned the title of national commander," current National Commander Clarence Hill said. " He is one in a million. Simply put, John H. Geiger is a giant in the history of The American Legion."

Initiatives undertaken by Geiger during his tenure as national commander has made it easier for his successors, Hill said.

"John Geiger is a man who commands respect without wearing it on his sleeve," Hill said. "Born in Council Bluffs, Iowa, it's easy to forget that this easily approachable Midwestern father and grandfather has met with several U.S. presidents and wields enormous influence in the nation's largest veterans' organization.

"Anyone should consider their selves fortunate to have John Geiger as a neighbor, friend and leader. There are many things to like and admire about John Geiger. One of my favorites is the wise council and sage advice he continues to offer our great organization after so many decades of service. As we say in the Navy, Bravo Zulu! Job well done."

In accepting his accolades, Geiger reminded everyone present that any accomplishment or contribution he may have made to the Legion is also a result of surrounding himself with talented, hard-working and dedicated men and women of The American Legion.

"I've had a few victories and a few defeats," Geiger said. "But the victories all go back to the people you have around you. It's the small things that are done. It's the things that often go unnoticed that make the difference. It's working together for a common goal and recognizing that you can't do it alone. And we in The American Legion are good at working together to make good things, important things, happen."

The event was hosted by the Department of Illinois. Past National Commander Martin "Marty" Conatser was master of ceremonies.