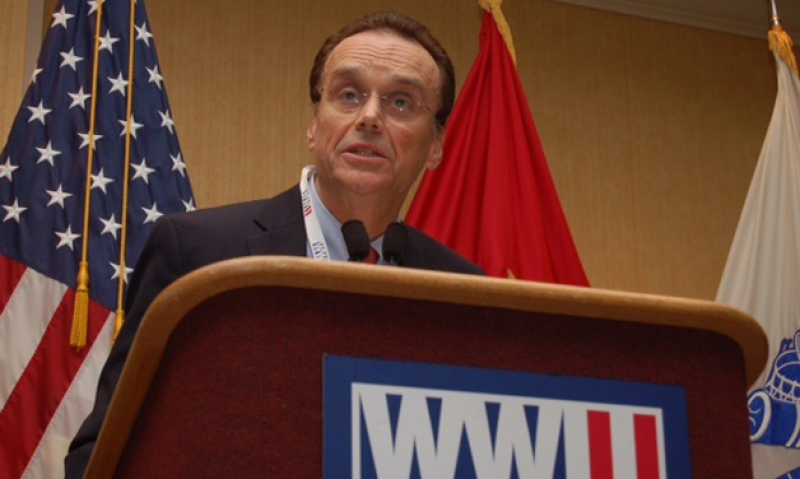 Former Newsweek senior editor was a keynote speaker at the International Conference on World War II in New Orleans on Dec. 7. (Photo by Jeffrey Stoffer)

U.S. journalists of the 1930s had a term for Germany as the Nazi Party rose to power in the 1930s. They called it “Hitlerland.” In the opening session of the International Conference on World War II in New Orleans Thursday, author and former Newsweek senior editor Andrew Nagorski shared U.S. interpretations of Adolf Hitler and the spell he cast over Germany in the early years of the Third Reich.

“This is, in Hollywood terms, the prequel,” said Nagorski, whose critically acclaimed book, “Hitlerland: American Eyewitnesses to the Nazi Rise to Power,” examines western accounts of Hitler’s massive influence in Germany before World War II. Nagorski was the keynote speaker of the conference, titled “Stemming the Nazi Tide: The End of the Beginning 1942-43.” His portion of the conference dealt with the years leading up to the Allied effort to repel Hitler’s advance through Europe.

“The Americans who lived (in Germany) longest became increasingly alarmed that they were seeing something the world had not seen before,” Nagorski told a crowd of approximately 450.
American journalists like Dorothy Thompson, who interviewed Hitler early in his reign, had dismissed him as a rambling misanthrope incapable of posing a serious threat. “There wasn’t one-on-one contact,” Nagorski said. “He would go off on these monologues. A lot of people came away from interviews frustrated. Hitler could play to an audience, but he wasn’t very good one on one.”

Moreover, Hitler did not care what America thought, the author said. “He never had any curiosity about American opinion.”

Germany, however, had seduced many Americans after World War I, both for its economic opportunities and for its lack of morals, Nagorski said. Defeated and demoralized, Berlin offered low cost of living, despite massive inflation, and, said Nagorski, “in a word: sex. Berlin made the 1960s in the United States look very tame.”

U.S. investors poured money into Germany’s resurrection until the stock market crash of 1929, which ultimately opened a window of opportunity for the Nazis and Hitler to assume control. “There was a sense that Germany could get on its feet, and then it was hijacked. And a lot of people went along with the hijacking. (Hitler) was a man who played human psychology very well. A man who had a sense of staging.”

It wasn’t until the late 1930s when Germany began overthrowing neighboring countries and committing genocide against European Jews that the seriousness of his ambitions became horrifyingly clear, and America realized that the Nazis had to be stopped. If not for Hitler’s unique and personal ability to influence his people, however, “it would not have gone on to be the Third Reich.”

As the end of the beginning drew near and U.S. military intervention was imminent, Dorothy Thompson and other American observers realized that Hitler was indeed capable of leading his nation regardless of its evil intentions. Still, said Nagorski, they found little substance in his rhetoric. “(They discovered that) if you take away the anti-semitism, there’s nothing there.”

The conference continues today, Dec. 7, and Saturday, Dec. 8. For a schedule and list of speakers, visit www.nationalww2museum.org. Access to view the conference live online can be purchased by visiting the site.