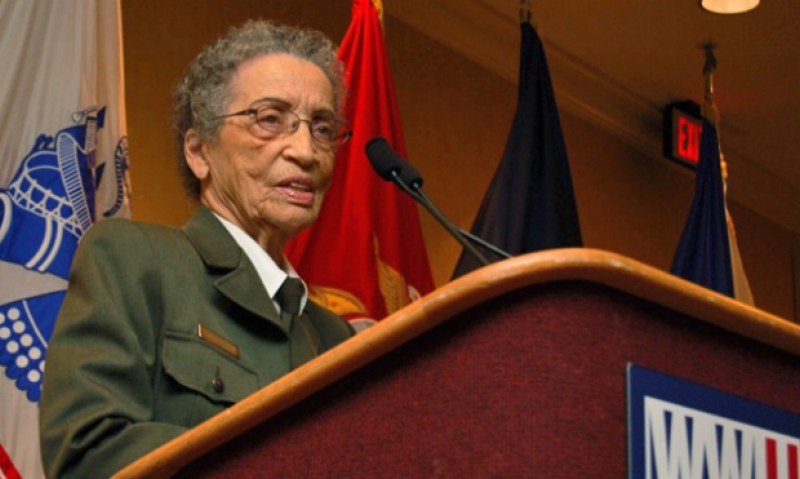 Betty Reid Soskin is proud that "after all these years, 91 of them, I'm considered a primary source." As a young black woman in the late 1930s, she had two career choices, she told attendees of the International Conference on World War II: "agriculture or domestic servant."

World War II soon intervened, and she was put to work as a civilian file clerk for the military, "changing addresses to save the world," she says. Her parents, she added, were very proud that she had not been forced into the only other career paths available at the time for black women in America. In the years and decades that followed, she witnessed profound changes in equality for minorities and women, changes she believes can be traced to the home-front effort during World War II, when men and women, regardless of ethnicity, were summoned to prepare the nation for a massive military strike against Axis forces in the European and Pacific theaters.

The civil rights movement, she says, began when black and white home-front civilians were brought together more than 20 years before they could share drinking fountains, schools or hospitals. "There was no time for encounter groups or diversity training," she said of the wartime effort.

Soskin's Friday presentation followed the conference's theme – “Stemming the Nazi Tide: The End of the Beginning 1942-43” – presented by the National World War II Museum in New Orleans. Her talk gave personal and sociological context to the over-arching discussion of how America could retool its economy and culture to fight a two-front war on the heels of the Great Depression.

That mystery was unraveled by historians Mark Stoler, Conrad Cane and Keith Huxen, who focused on the complexities of convincing U.S. industrialists and defense authorities to join the war effort and put American mass-production ingenuity to work against Adolf Hitler as he was advancing across Europe and around the world.

Friday's presentations also included an "oral history showcase" from the National World War II Museum that told the story of the U.S. Merchant Marines and the perils they faced transporting goods and personnel through enemy-infested waters. Merchant Mariner John Drayton described in a video interview what it was like to see German submarines surface after his ship was torpedoed.

There was no panic," he said. After it was known the ship was taking on water, however, the men aboard were ordered to abandon. "Those are words sailors don't want to hear... there were 24 of us on a crowded life boat."

The Germans continued firing into the sinking ship as the Merchant Mariners drifted by. "In the evening, we looked around," Drayton said. "There were no other life boats. No other survivors. We were adrift for 30 days."

Canadian historian J. Marc Milner told the crowd of more than 450 that German U-boats harassed or sank hundreds of U.S., British and Canadian trade and troop-transport vessels throughout 1942. "The U-boat scourge, it seemed, was unstoppable," he said. "Historians have tried to portray the battle of the Atlantic in shooting terms. It was much more than that."

Milner said organizational and tracking systems had to advance quickly to avoid contact with the German subs. But it wasn't until the late winter of early 1943 when progress was finally made. Allied forces poured military assets into the problem, depending largely on radar and air power, along with increased involvement of escort ships, and improved spring weather. "The defeat of U-boats couldn't be a single event," he said. "It had to be a process."

The process worked. By May of 1943, Allied forces had sunk more than 100 German subs and forced the U-boat program into the middle Atlantic, well below the surface, opening routes from the U.S. eastern seaboard to Europe. By that time, the Allies were starting to build up for the crossing of the English Channel and the D-Day invasion of Normandy, France. That it took until June 6, 1944, to make the crossing was largely a function of the need to manufacture and transport the weapons, equipment and supplies necessary to invade.

One of the war's most essential ingredients was the Higgins boat. New Orleans resident Jerry Strahan, an author and businessman, told the story of the colorful Andrew Higgins, who defied Washington bureaucracy to bring into existence the landing crafts necessary to deliver assault forces to the war in both theaters.

At first dismissed by the Navy, Higgins persisted with his proposal to manufacture vessels capable of landing personnel and heavy equipment – even tanks – on beaches rather than wait for ports to be secured. In time, the Higgins military boat-building business was accepted and employed more than 20,000 workers who produced more than 60 lines of military-support products. His company built more than 20,000 boats for the Allies during the war.

"He was definitely the right person at the right time in the right place," Strahan said, noting that Supreme Allied Commander Gen. Dwight Eisenhower once said Andrew Higgins "was the man who won the war for us."

At 91, Betty Reid Soskin still works full time for the National Park Service as a ranger at the Rosie the Riveter World War II/Home Front National Historical Park in Richmond, Calif. She was a businesswoman in California after her home-front efforts during the war and went on to hold many high-level staff positions in her city, county and state. She was California's "Woman of the Year" in 1995 and has received an honorary doctorate degree.

More important than that, she says, is the progress she has witnessed in civil rights. Her great-grandmother, who lived until Soskin was 19, was born into slavery. Her parents had limited opportunities. But she and her family witnessed massive changes during the 20th century, from desegregation to the election of America's first black president in 2009. World War II, and the home-front effort necessary to build strength and fight it, eventually transcended gender and ethnicity, driving the civil rights movement forward. “This was where change was happening,” she said, adding that after all she has experienced, “it's pretty good being a primary source.”