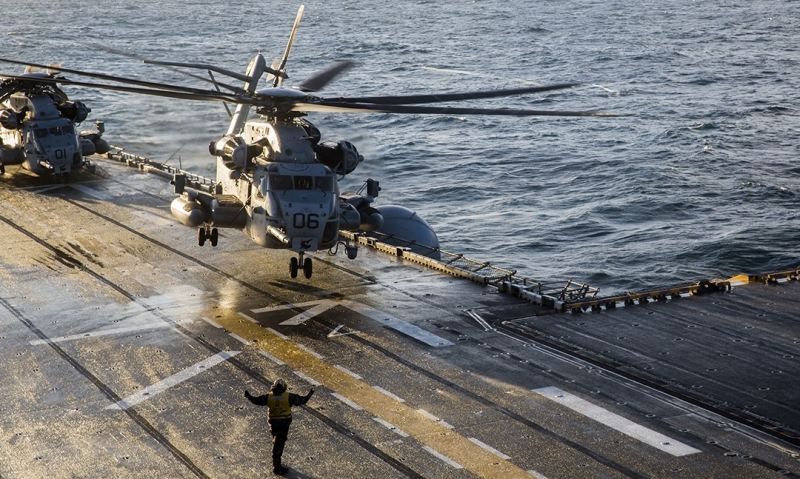 A CH-53E Sea Stallion prepares for takeoff aboard USS Iwo Jima (LHD 7) while conducting an air assault in Icelandic terrain on Oct. 17, 2018. Iceland’s unique terrain and climate allows for Marines to be better prepared and rapidly deploy in support of NATO allies and partners. (U.S. Marine Corps photo by Lance Cpl. Margaret Gale)

Nov. 10 is the birthday of the Marine Corps, first formed as the Continental Marines in 1775 during the Revolutionary War. Here are some things you may not know about the service branch.

1. The Corps’ first amphibious raid was only weeks after its creation; Marines successfully stormed a British weapons cache in the Bahamas. (via USO)

2. Marines often pin their next promotable rank onto their uniforms as motivation. They usually hide it in their cover, or under a pocket flap. (via USO)

5. In 1798, the Marine Corps began issuing "one stock of black leather and clasp" to Marines. The item was worn to protect their necks when fighting with swords. Today, the standing collar on the dress coat of the Marine Corps uniform is a vestige of the “leatherneck” tradition. (via Mental Floss)

6. Ed McMahon, Drew Carey and novelist Robert Ludlum (who wrote the Jason Bourne books) all served in the Marine Corps. (via Mental Floss)

7. The first Marines enlisted at Tun Tavern in Philadelphia, which is considered the birthplace of the Corps. (via Mental Floss)

8. “The Marines’ Hymn” is the oldest official anthem of any U.S. military service. (via www.mca-marines.org)

9. President Andrew Jackson (in office 1829-1837) wanted to abolish the Marine Corps, thinking it no longer necessary. (via www.mca-marines.org)

10. During the cake-cutting ceremony every Marine Corps birthday, the first three pieces are presented to the guest of honor, the oldest Marine present and the youngest Marine present. This tradition is also part of the Corps’ birthday celebration on the battlefield, if possible. (via We Are The Mighty)