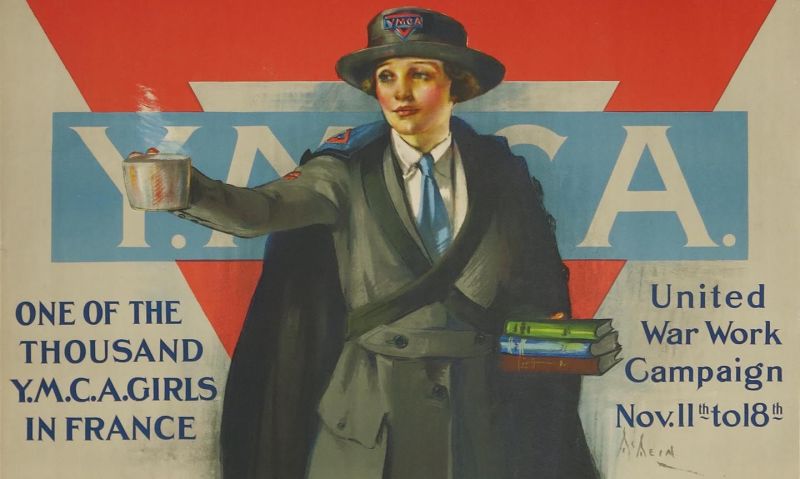 A World War I poster from the Legion's collection, by artist Neysa McMein. (American Legion Library)

The Emil A. Blackmore Museum of The American Legion has recently published an online exhibit featuring the Legion's extensive poster collection. The collection includes over 3000 posters, more than 150 of which have been selected for display in the exhibit along with photos of the collection throughout its history.

The exhibit explores the role posters played in wartime society, including posters from World War I and World War II as well as several interwar and postwar posters. Designed by some of the best artists and illustrators of the era, these evocative posters formed the background of everyday life throughout the 20th century. During the two world wars, posters sold war bonds, recruited for the military, raised money for service organizations and influenced public opinion, thus serving both as propaganda and unique works of art. Their bright colors and recognizable images combined with memorable slogans to help unite America's determination to contribute to the war effort.

The American Legion's poster collection has been displayed twice before, once in 1937 when several hundred posters were exhibited with Legion memorabilia at the Indiana War Memorial, and again in 2010-2011 when 24 posters were loaned to the Indiana State Museum for their exhibit “Art for the Nation,” which explored ways that poster art was used to mobilize Americans on the home front during World War I and World War II. The American Legion's new online exhibit is the largest exhibition of its poster collection since 1937, and will be available indefinitely.

Visitors can browse the exhibit by navigating to the Emil A. Blackmore Museum's website. One past exhibit, "For My Country: The Life and Service of Franklin D'Olier" is also available, and visitors can browse all exhibits here.