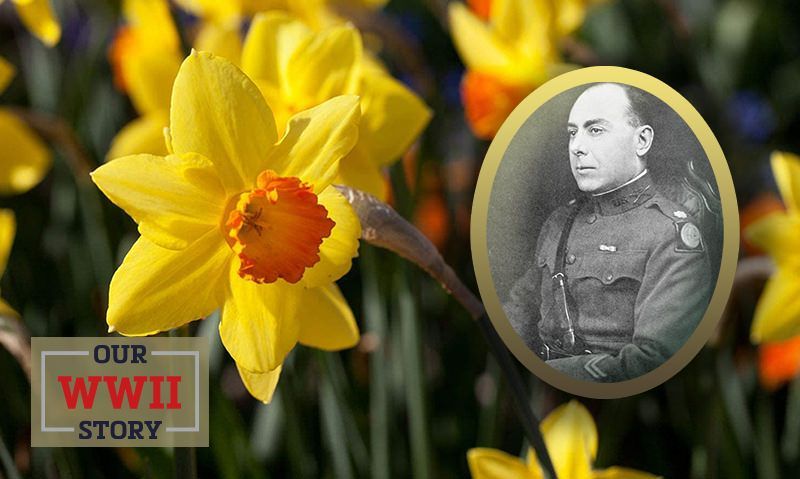 Maj. G. Edward “Ned” Buxton Jr. of Rhode Island was the beloved commanding officer of future Medal of Honor recipient Alvin York in the 328th Infantry Regiment, 82nd Division, during World War I. Buxton had famously counseled York, then a private training at Camp Gordon, Ga., about his Christian reluctance to take another life, even in wartime combat. Buxton eventually sent York home for 10 days to sort out his feelings, certain the young man from rural Tennessee would seek non-combatant status as a conscientious objector. York, impressed with Buxton’s compassion and knowledge of the Bible, instead came back willing to fight and kill, if need be.

“It made me happy to know my battalion commander was familiar with the word of God,” York later explained. So respectful of his commanding officer, York later named one of his children George Edward Buxton York.

Following the armistice in Europe, Buxton – soon to be promoted to lieutenant colonel – was one of 20 officers from the American Expeditionary Forces who met in February 1919 to lay out plans for what would become The American Legion. At the Paris Caucus the following month – which York also attended – Buxton was assigned to chair the first national Constitution Committee of the organization. He was also the first commander of his American Legion post in Providence, R.I., participated in the May 1919 St. Louis Caucus, was one of the organization’s first incorporators, helped lead the first National Convention in November 1919 in Minneapolis, and served as an American Legion National Executive Committee member in 1920.

After the war, Lt. Col. Buxton worked as a textile-industry executive and continued his dedication to The American Legion and Boy Scouts, the first youth program supported by the organization. He rose to colonel in the reserves and commanded the 385th Rhode Island Infantry, 76th Division, before he hung up the uniform in 1932.

He did not realize at the time that his wartime service was far from over.

After Col. William Donovan – also an American Legion founder – was appointed in 1941 by President Franklin D. Roosevelt to lead the agency that would become the Office of Strategic Services, forerunner of the CIA, Donovan recruited Buxton to serve as his second-in-command. As a newspaper war correspondent before U.S. entry into World War I, Buxton had experience getting behind enemy lines to write and send strategically important reports back to the Allies. He was arrested several times during his time in Germany, France and Belgium on suspicion of being a spy, but the charges never stuck.

His life of espionage would come later.

“Col. Buxton, known for his shrewd observation and diplomacy, was the obvious choice by Donovan to be his primary deputy – first assistant director – of the OSS in order to handle procedural and many operational aspects of running this international organization,” Buxton’s grandson, Gonzalo Edward Buxton III, wrote in a 2006 biography. As the OSS grew to more than 13,000 men and women by 1944, the American Legion founder’s expertise in large organizations was vital to the spy agency. But he had a much greater role, as well, one that diversified U.S. intelligence and made him a respected colleague among top leaders of World War II.

“Donovan, Buxton and (Executive Officer Lt. Col. Otto Doering Jr.) believed that the best way into the mind of the enemy was to harness the minds, talents and experiences of every kind of American,” Buxton’s grandson wrote. “That meant hiring women as well as ethnic minorities. So, while many people were gripped with a fear of subversion, and while Japanese-Americans were being put in internment camps, the OSS (and Buxton specifically) were hiring Japanese-Americans from these camps, along with German and Italian-Americans. The OSS personnel office once boasted that its payroll listed every nationality and every occupation. The OSS hired thousands of women to work in many types of jobs. Buxton and the OSS and other war-related positions offered the first real relief from the discrimination then rampant in our society and set the stage for future progress.”

Buxton also reviewed and approved strategic plans and operations from the White House to Gen. Dwight D. Eisenhower, including intelligence that influenced the D-Day invasion of Normandy, France, on June 6, 1944. He also distinguished himself as an analyst of the Soviet Union’s postwar military weaknesses. Many of his accomplishments during World War II, however, were classified, his grandson wrote.

Col. Buxton resigned as assistant director of the OSS on June 30, 1945, seven weeks after Germany surrendered to the Allies. Of his friend’s decision, Donovan wrote: “Col. Buxton has tirelessly and ably served the war effort. And now when he finds that he must return to private life, no words of mine can express the vast extent of our debt and indeed, that of our country, to him.”

Buxton returned to business leadership serving as an executive and board chairman for such companies as Fruit of the Loom Mills and Bache and Co. (later Prudential Securities). He spent two years as president of Knight Finance Corp. of Providence and worked to raise funds for his alma mater, Brown University. He also continued to serve in support of The American Legion and Boy Scouts.

When he died at age 68 on March 15, 1949 (American Legion birthday), dignitaries from around the world sent their condolences and later attended a celebration of his life in Providence. Buxton International House on Brown’s campus was named in his honor, and members of the Infantry Lodge (12 surviving former officers of World War I) deeded 30 acres of property near Rehoboth, Mass., to the Boy Scouts of America’s Narragansett Council that would become Camp Buxton. And, among the many tributes appeared one from a Dutch bulb grower – in honor of Buxton’s OSS services during World War II – who named a specially bred variety of daffodil the Edward Buxton.