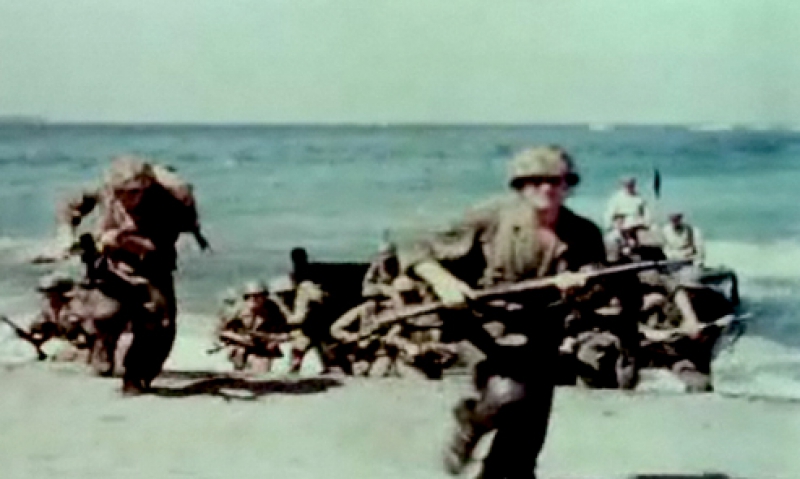 Drawing on never-before-seen color footage, a new History Channel series tells the story of World War II through the eyes of 12 Americans.

The History Channel will show World War II as it’s never been seen before.A five-night, 10-hour series premiering Sunday, “WWII in HD” draws from color war footage recently discovered in archives and private collections around the world. Some of it never before seen, the footage has been restored and converted to high definition, or HD, to show the war in what History calls “unprecedented clarity.”Airing on History Channel Nov. 15-19, 9-11 p.m. EST, “WWII in HD” follows 12 Americans through the war. The group includes Shelby Westbrook, a Tuskegee fighter pilot; Army Sgt. Jack Werner, a Jewish émigré who fled Austria to fight Hitler but ended up serving in the Pacific; Navy seaman Jack Yusen, who survived 72 hours in shark-infested waters when his ship went down off the Philippines; Army nurse June Wandrey; Time correspondent Robert Sherrod; and others. Hollywood actors such as Ron Livingston, LL Cool J, Rob Lowe, Amy Smart and Steve Zahn voice their stories.Michael Stiller, executive producer, and Libby Haight O’Connell, chief historian for Arts & Entertainment Television Networks, recently spoke with The American Legion Online Update about the first-ever color World War II documentary.Q: Countless film projects have told the stories of World War II, most recently Ken Burns’ “The War.” What makes “WWII in HD” unique and worth watching?

Stiller: We’ve gone to museums, footage collectors and the National Archives to find as much color footage shot in World War II as we can, with an emphasis on stuff that hasn’t been seen before. The goal is to show people what the war was really like – what it looked like, what it sounded like – through the prism of 12 Americans who actually experienced it. O’Connell: This is not colorized. This is truly shot in color. We forget how much color film was available in World War II. It wasn’t handy, it wasn’t easily accessible, but people were using it. These images are things I’ve never seen, and I’ve seen a lot of World War II footage. I didn’t even know this stuff was out there. It looks great.Q: Many people will be surprised that color footage from World War II even exists. What did it take to obtain it?

Stiller: In some cases, literally going down into basements and finding boxes that hadn’t been opened in decades. We found color reels of footage from World War II that, in a sense, were lost. They had never been logged, so the people who had the footage really didn’t know what was on the reels, and that’s why it never really found its way into the mainstream and onto television. So using contacts in the footage communities and a little bit of detective work, we were able to find a lot of stuff that hadn’t been seen before. It just involved a lot of searching and a lot of relationship-building.O’Connell: It’s not that the institutions were negligent. It’s just that a lot of these places don’t have the funding to do all the cataloguing and preservation work that they’d like to do. So one of the things History was able to help with was to actually help them preserve these films.Stiller: They’ve been tremendous guardians of this footage for decades, and what we’ve been able to do is to bring it into the spotlight and to put it into a new documentary that really showcases it.Q: Once you located color footage, what had to be done to make it broadcast-quality?

Stiller: Some of the footage was in good shape and just needed to be converted to HD. In other cases, the footage had degraded a bit. We had situations where reels had broken and needed to be taped back together. It’s not a high-tech approach. It’s just very time-consuming.Q: How did you select the 12 Americans whose accounts are featured in this series?

O’Connell: People imagine World War II soldiers to be the age of our World War II veterans today. In fact, during World War II, they were young men, young women, who were doing this fighting. That’s why it’s important to have these trained voices, young actors, representing these individuals. I think it brings more reality to their story, having the younger voices represent the characters we’re following here. The diaries and journals Mike’s using in this show are just fascinating, and they really do bring it to life. The personal point of view is extraordinary.Q: Young Americans are often said to know little to nothing about the places and events of World War II. Why might this particular series appeal to them?

Stiller: I think there’s something timelessly fascinating about World War II. Using footage that, in many cases, has not been seen before and has color and looks like something that is contemporary really personalizes it for young people and allows them to look at it in a new way. This was the largest war ever fought and one of the seminal events of our time, and it really wasn’t that long ago in the whole scope of things. Seeing what it looked like, what it sounded like, what these people thought as they were wrapped up in these events – I think whether you’re a younger viewer or an older viewer, there’s just something universal about that.O’Connell: The soundtrack on this is unbelievable. I’ve never heard anything like it. Kids are used to surround sound, stereo sound, and they haven’t seen World War II with this type of soundtrack. It’s amazing. Stiller: We’ve gone out of our way to find great speeches from the time, and great radio broadcasts, so there’s a lot of dimensions to it. It’s very rich, in that way. I think of the part of the film where the news of Pearl Harbor is coming in, and you hear an actual broadcast of a pro football game going on at the time. You can really identify with that.Q: How do you take something as broad as World War II and narrow down the scope?

Stiller: This is really the story of 12 Americans. These people cover all different theaters of the war, all with different experiences, so we’re able to do something big and pretty comprehensive through their experiences. But we’re really only covering the parts of the war that they saw or witnessed or touched, so that cuts it down a little bit and focuses it. The other thing that focuses it is the availability of footage. So we tend to concentrate more on battles for which we’ve been able to find a lot of color footage. So those two things together, I think, give it focus. But it’s always hard deciding what stays and what goes in any documentary.Q: Were you concerned with political correctness?

Stiller: I think we wanted to keep it as real as possible. The veterans speak in the vernacular of the time. As far as footage, there are times when the footage is graphic, and it was important for us to show the brutality of the war and not gloss over that.O’Connell: Some of that footage would have been classified during the war. We do have “viewer discretion advised” on the show. War is not for little children. This is a real show with a very real approach to what it’s like.Q: How do you feel about the finished product?

Stiller: I love it. I’m very proud of this piece. I think we accomplished what we set out to do. I’ve seen a lot of World War II documentaries – I’ve seen a lot of wonderful World War II documentaries – but I’ve never seen the war presented exactly like this.O’Connell: I’m the daughter of a World War II vet, and I just wish he was alive to see this. It’s something, I think, that has tremendous meaning for everyone who works here. We’re proud to share it with the rest of America.