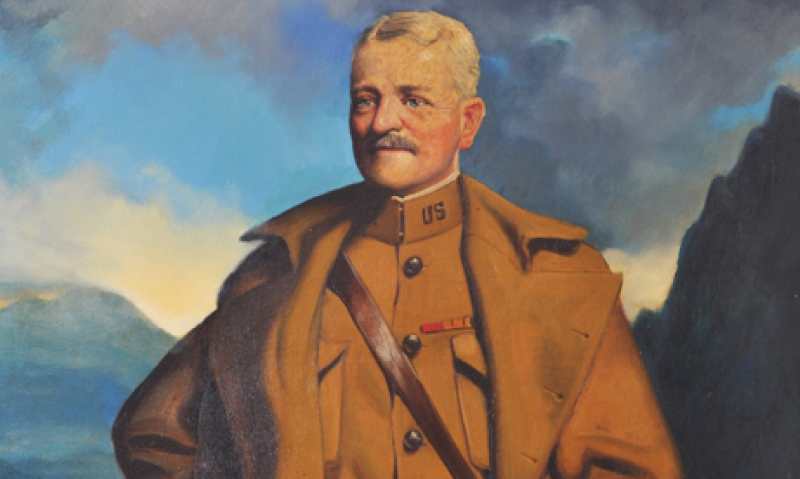 Oil painting portrait of Gen. John J. Pershing (Black Jack) painted in 1919 by Irving Sinclair. Pershing was the first American in history to hold the military rank of General of the Armies.

Historians called him Commander in Chief of the American Expeditionary Forces.

Congress named him General of the Armies.

His chief biographer called him J.J.P. Others used his nickname: Black Jack.

But at the end of World War I, advocates for forming the American Legion called Gen. John J. Pershing one of their staunchest allies.

The celebrated war hero, who shared a six-star general ranking with only George Washington, made certain that creating the veterans organization was discussed at a Paris caucus of key military officers in March 1919.

The debate went so well that a second meeting was planned for May 1919 in St. Louis. By this time, the wheels were in motion, as President Woodrow Wilson joined the list of heavyweight supporters.

Congress issued The American Legion its federal charter in September 1919. Pershing was quick to remind veterans of their roots. “The organization which has been launched, known as The American Legion, possesses great advantages for the exercise of the same patriotism with which you have been imbued during your service,” Pershing told Legion members assembled in New York.

By that November, the Legion hosted its first convention in Minneapolis. Indianapolis was selected as the site for National Headquarters.

Throughout his career, Pershing would exert his authority as needed, but would avoid the limelight when he could. When support for a 1920 presidential bid was strong, Pershing refused to campaign. Instead, the nation elected President Warren Harding that fall. By 1926, supporters wanted him in another high office: national commander of the American Legion - the organization he so proudly supported as a member of George Washington Post 1 in the nation’s capital.

“… I am therefore compelled to deny myself the opportunity for an honor that might well crown the career of any soldier,” Pershing told his supporters. “I am not a candidate for the office (of national commander). … I shall be content to serve in the ranks.”

But Legionnaires weren’t content with that answer. They fought Pershing’s resistance by naming him honorary national commander at the October 1926 convention.

Throughout his career, Pershing’s image as a common soldier remained part of his persona.

In one interview, he was quick to comment: “The American Legion? They are my comrades in service to the last man. I mean it. I’ve put in practice what I preach.” The seasoned General of the Armies then quickly produced his Legion membership card and quipped, “And I’ve paid my dues too!”

Pershing also paid his dues on the battlefield, along with the millions of Legionnaires he praised.

Upon Pershing’s death on July 15, 1948, President Harry Truman heaped praise on the decorated general who had a modest start 88 years before in Laclede, Mo. “Embodied in Gen. Pershing’s character were all those soldierly qualities that are essential to a great captain: brilliant leadership, steadfast courage, tireless energy, unswerving loyalty and constant devotion to duty.”

Although Pershing’s state funeral included streets lined with some 300,000 people along the route to Arlington National Cemetery, the general’s final resting place mirrored his life in the ranks.

A simple headstone marks the spot where Pershing was laid to rest among the soliders – and early Legionnaires - he commanded in Europe.