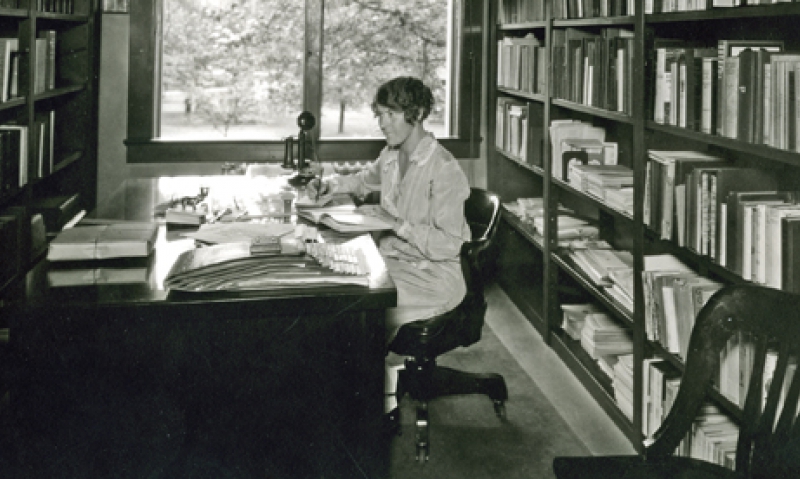 She was no Pershing, Truman or Teddy Roosevelt Jr.

She did not rank alongside Patton or Ike.

But she was well-educated, determined and dedicated to the causes of Americanism just like them. Although not a warrior on a battlefield or an eventual president, Verna B. Grimm chronicled their battles and causes.

During her 34 years at the helm of The American Legion Library, she was probably best known for growing and cataloging hundreds of war posters.

Messages like "America needs your scrap rubber," "On the job for victory" and "The Army is counting on you for more metal" are all depicted with artwork on the posters that Grimm constantly sought for the library she ran from its founding in 1923 until her retirement in 1957.

In a guide to the exhibit that has been viewed by the public since 1937, Grimm wrote: "The students and children will be interested in learning of these phases of the World War (I) not found in history text books. They will learn that the war was not just a series of battles, but that with it life had to be lived as gallantly as possible and these personal associations helped make the ordeal endurable."

Since then, she looked everywhere for posters from World War II and beyond, all while managing a library that later soared to more than 12,000 books and pamphlets.

Before moving to Indianapolis to start up the Legion Library, Grimm's life mirrored the tragic turns met by other war-time widows. But for this widow, the battlefield was the streets of Centralia, Wash., not a European war zone.

Grimm's marriage to Army Lt. Warren O. Grimm on April 15, 1918, ended just 19 months later when he and four other Legionnaires were gunned down during an Armistice Day parade on Nov. 11, 1919. Her husband, the Legion post commander, led the parade in honor of Centralia's veterans.

The Industrial Workers of the World (Wobblies) already had a troubled relationship with the town dating back to 1914. Some of the union members, including some unemployed lumber workers, had been kicked out of town after conflicts with local authorities. A few returned to loot stores, adding to the friction.

A Centralia union hall opened in 1917, but was looted in 1918, so the Wobblies were ready for revenge. When the 1919 parade passed in front of the union hall, the Wobblies feared for another attack. The armed Wobblies accused some of the parade participants of storming the hall first. But others recapping the events note that Grimm and fellow Legionnaire Arthur McElfresh were gunned down in the middle of the street, not approaching the hall. Two other Legionnaires also lost their lives in the battle that ensued.

The assassinated post commander left behind his 6-month-old daughter, Shirley Ann, and his widow, Verna, to determine the family's fate.

Verna persevered and earned a master's degree in library science from Columbia University. She rejected a reference librarian offer from the New York Public Library, instead opting to move to Indianapolis to launch the Legion's library.

Outside of her library work, Verna raised Shirley Ann and authored "A Bibliography of Book Plate Literature." In her travels, Verna collected match book covers and wine corks as souvenirs.

Her reputation as a collector - don't forget all those war posters - earned her this distinction in a post on the Internet that she never lived to experience: "God bless you Verna B. Grimm. I heartily propose her canonization as St. Verna, patron saint of compulsive collectors."

A more serious honor came her way in 1958, just a few months after her death.

In October 1958, the Legion's National Executive Committee paid posthumous tribute to their grand collector by renaming "her" library as "The Verna B. Grimm Memorial Book Collection."

While husband Warren earned his honors as part of the American Expeditionary Forces in Siberia, his bride earned recognition in her own right by chronicling the lives of thousands of other Legionnaires.