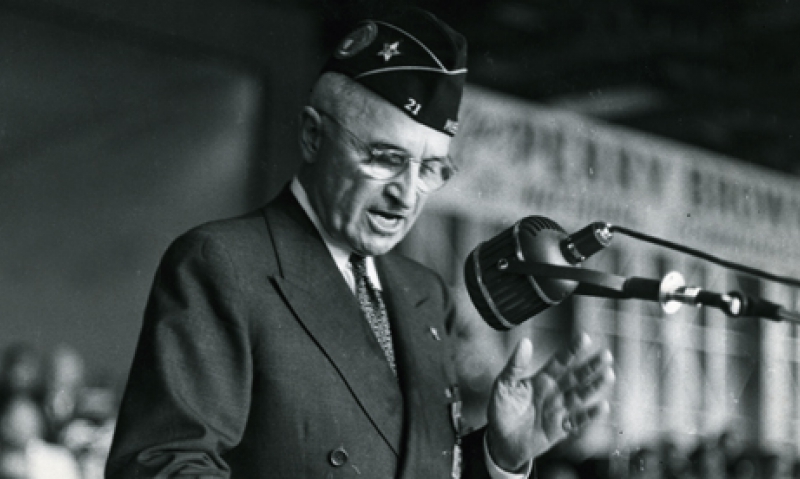 In 1919, a soldier named Harry was just another guy back home from the war in search of a job. He and a partner started a haberdashery, but it only survived a few years. In 1922, he started a long political career at the county level. From there, he soared to higher places but never lost touch with his simple roots.It was around that time he helped found The American Legion, the veterans’ organization that has focused for more than 90 years on the common denominator among all soldiers regardless of rank or length of service.Harry was only a captain in 1919, so he couldn’t travel to Paris for the formative caucus of The American Legion. But that didn’t stop his enthusiasm for the neophyte organization. He helped organize Fitzsimons Post 8, the first in his home state of Missouri. He also helped launch several other Missouri posts and became a life member of Tirey J. Ford Post 21 in Independence.In 1945, Harry S. Truman assumed a role that transcended greatly his modest military rank and folksy status as “just one of the guys.” After just a few months as vice president, Truman abruptly found himself taking the oath of President of the United States, after the death of Franklin Delano Roosevelt. As he became the 33rd commander-in-chief, Truman also entered history as the first Legionnaire president.Truman’s new role as leader of the free world did not stop his enthusiasm for the Legion he grew to love. Just ask the Secret Service. In 1948, after giving his address at the Legion National Convention, Truman left the dais and took a seat on the floor with the Missouri delegation. The Secret Service agents were not aware that Truman was planning to sit among his fellow Legionnaires. They weren’t happy with a wrench being thrown into their routine, but the president still sat there for about 30 minutes before deciding to move on. Harry was again one of the guys.Missouri never forgot him either. In 1961, the Department of Missouri named him an honorary past department commander. At that point in his life, the former president had already been a delegate to all 42 of the Legion’s national conventions. Had it not been for his political career, some suspect he would have been a Legion commander much earlier.At that year’s convention, the ex-president was back on stage, donning his blue Legion cap with his new honorary title. He quipped that he appreciated the distinction as much as if he had earned it. The Legion called on Truman a few years later to team up with another former president to head the Legion’s 50th anniversary in 1969. Truman and former President Dwight Eisenhower co-chaired the Legion’s Committee of One Hundred as the nation’s first and second presidential Legionnaires. Truman and Ike became the first recipients of the 50th anniversary medal of The American Legion that year.Despite all the recognition he received from the nation and the Legion, Truman remained focused on returning to basic principles that are good for all, whether challenged or privileged. At one of the many national conventions he addressed, the former president stressed the importance of the preamble to the Legion constitution. “Next to the Constitution of the United States it is one of the real documents for the welfare and benefit of the people of this country,” he said.Those words he loved:“For God and country we associate ourselves together for the following purposes:“… To safeguard and transmit to posterity the principles of justice, freedom and democracy;“ To consecrate and sanctify our comradeship by our devotion to mutual helpfulness.”His dedication to that cause helped the first presidential Legionnaire sit amidst delegates as plain old Harry, just like the soldier looking for a job at the end of World War I.