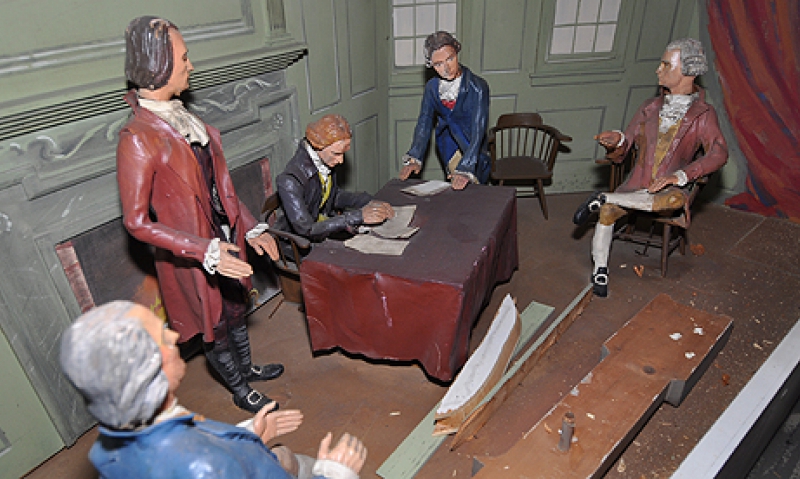 A former Emil A. Blackmore Museum exhibit at The American Legion National Headquarters in Indianapolis has been packed up and shipped to Kentucky to entertain a new generation in a historic American setting.

The "Founding Fathers" exhibit occupied most of what is now the fine-arts gallery on the fourth floor from 1991-2003. Two massive dioramas depicted Thomas Jefferson's Philadelphia home in 1776 and the Constitutional Convention at Independence Hall in 1787. Within the dioramas were 41 realistically painted 20-inch-tall figurines - a few of which, via an electrical system, actually moved. The scene was flanked by reproductions of historical flags, paintings and documents. Audio commentary guided visitors through the exhibit.

The American Legion acquired the exhibit in 1991 via a donation by Francis B. Messmore. Messmore, a Legionnaire who died in 1997, was then president of Messmore & Damon Inc., a scenery-design firm prominent in the early days of animatronics. As far back as the 1933-1934 Century of Progress Exhibition in Chicago, the company created "The World a Million Years Ago," featuring a four-ton mammoth, a 50-foot dinosaur and other prehistoric animals, all of which moved. "Founding Fathers" was built for Life magazine, and debuted at Life's New York City headquarters in 1962. It appeared at various sites after that, including the State Fair of Texas, and ended up in storage. While winding down the firm, Messmore came upon the exhibit and contacted the Legion.

"The display was built before there were smooth-moving, computer-driven characters. It wasn't a Disney World operation," American Legion Executive Director Marty Justis said. "But with an audio tape that accompanied the movements of the characters, it was a good way to impart to those who watched and listened the essence of the Great Compromise, which is how the structure of American government came to be what it is today."

While residing at National Headquarters, the exhibit welcomed many tours, especially those of schoolchildren. "There was something in the total display that appealed to people of all ages," Justis said, "but it was probably the younger of our visitors who gained the most from it."

The Legion dismantled and stored the exhibit in 2003 due to a lack of space and dilapidation of the exhibit's elements. An NEC resolution at the 2009 fall meetings authorized the Legion to dispose of the exhibit. Its new home will be in Greensburg, Ky., where Mayor George "Lisle" Cheatham II stated that it will be reconstructed and displayed within a community complex being renovated in Greensburg's historic downtown, accessible to the public - especially school tours.

Today, the fine-arts gallery features pieces from throughout Legion history, from a 1919 full-length painting of General John J. Pershing to "Tribute to a Generation", a painting given to the Legion in 2004 by the American Battle Monuments Committee in appreciation for the Legion's fundraising efforts toward the World War II Memorial in Washington.