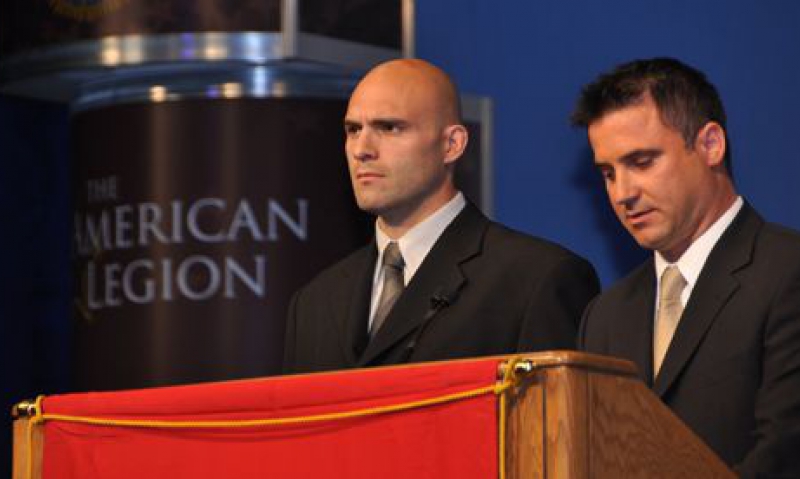 Jason Heit (left) and Stephen Grudenic of Blackhorse Productions discuss the DVD during the 2009 National Convention in Louisville. Photo by James V. Carroll

In the meantime, co-executive producers Stephen Grudenic and Jason Heit recently spoke with The American Legion about the project, and how Legionnaires can use it to educate the public and recruit new members.

Q: What was the genesis of this documentary?

Heit: Stephen and I had been working on military projects for about 10 years, and we kept hearing about The American Legion. Over and over, the name kept coming up. We started to do a little research and realized how fantastic the organization was. We thought it would make a great video.

Grudenic: From the beginning to the end, the process was very positive, and the cooperation level was very high.

Q: How long did it take to produce the film?

Heit: We contacted The American Legion about three years ago, and there were some discussions and questions. After about a year, we sent our first official proposal. We started shooting interviews about two years ago.

Grudenic: The actual filming of the project was about 14 months.

Q: What was the hardest part of the project?

Heit: We’re talking about an hour-long film where we’re trying to sum up the history of an organization with all these great accomplishments since 1919. There was a tremendous amount that, unfortunately, we just couldn’t put in. This could be a 10-hour miniseries. There’s so much content there. That was definitely difficult. One of the other challenges I found – and we found this with other projects where we worked with veterans and military personnel – is trying to get them to be open and talk about themselves. They are very humble.

Grudenic: Very humble. It’s hard for them to talk about some of the great things they’ve done. They do it because they want to do it. They don’t do it for any other reason. They tend to want to talk about everybody else instead.

Heit: Without them opening up and talking about what they do and the sacrifices they make, there wouldn’t be a film. But everybody who was involved in the project gave us great interviews, and we got the content we needed. We’re very happy with the outcome.

Q: How did the narrator, Neal McDonough, get involved?

Grudenic: Neal’s a personal friend, and his acting career includes “Band of Brothers” and “Flags of Our Fathers.” He’s narrated several of our documentaries. He truly has a passion for the military and its history, and we couldn’t think of a better person to narrate. He volunteered. He really believes in preserving history and creating awareness and raising money for charity. This is something he really believes in.

Heit: He has a real respect for the military and veterans. He’s part of the team.

Q: One of the film’s most memorable scenes is when you’re interviewing Ben Stein, and all of a sudden he begins to cry. What led up to that moment?

Grudenic: Well, Ben Stein also has a passion for veterans and the military. He talked a lot about how these people go to war, they serve their country, and then they come back and continue to serve. We asked him, ‘If you could give a message to them, what would you say?”’ He just broke down, because it came right from the heart.

Q: How does the completed documentary compare to your initial vision?

Grudenic: It is way more than what we envisioned. As we started to learn more about The American Legion, we became more and more fascinated, because there’s just so much in its history, and there’s so much it’s doing today. And so it went from just history to letting people know what (the Legion is) doing so they can help.

Q: What are your hopes for the film?

Grudenic: We’d definitely like this, first and foremost, to reach Legion members, veterans and the general public. We realize the contribution this organization makes to society, and how it lobbies for veterans rights, so it’s really important that this membership continues to grow. I think this film breaks down how the Legion is able to make life better for veterans and military personnel. So it’s a really important recruitment tool – to get them to join, to continue to grow – so power is there for lobbying. And I think the public needs to be aware of the Legion – what it does and the programs it has.

Q: What do you want to say to Legionnaires?

Heit: I’d like to thank them for giving us the opportunity to tell their story. It’s been an honor and a pleasure, and we appreciate the work that they do.