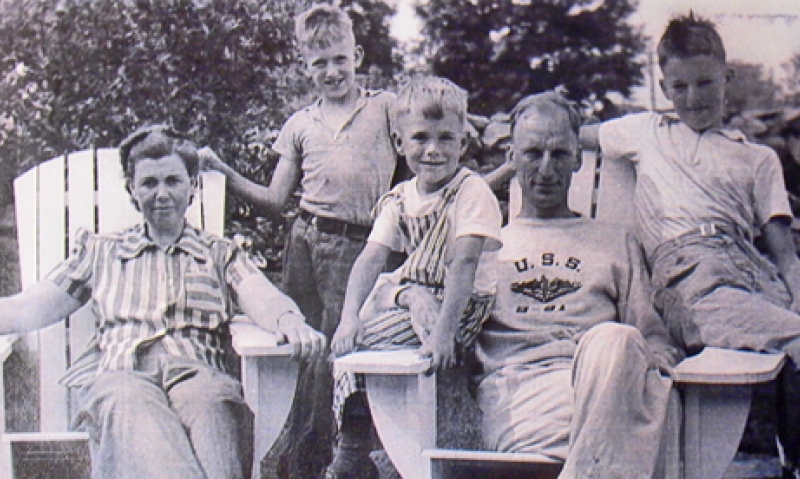 Nearly three years after USS Grunion (SS 216) was found off the Aleutian Islands, Bruce Abele continues to puzzle over what sank his father’s submarine in the early days of World War II.

Click here to read the Search for the Grunion blog and see photos of the submarine’s discovery.

In 2006, Abele and his two younger brothers, John and Brad, made headlines when an ocean-surveying firm they hired to scan the floor of the Bering Sea sent them an image of an oblong object with features resembling a conning tower and periscope mast.

The next summer, a remotely operated vehicle (ROV) confirmed the object as the wreckage of a U.S. submarine. At last, the Abele boys had solved the decades-old mystery of what happened to their father, Lt. Cmdr. Mannert Abele and his 69-man crew.

Since then, experts have poured over photos and video footage of the discovery, theorizing about what caused Grunion’s loss on July 30, 1942. Clearly the submarine went below crush depth and imploded; a channel left from its descent down an underwater slope is visible in photos.

“The rear dive plane is clearly in dive position, and that tells us they lost depth control,” says Bruce Abele, 80.

But why? An account by a Japanese officer aboard the freighter Kano Maru claims that after being torpedoed by a submarine north of Kiska, Alaska, the crew saw ripples in the water, fired their deck guns and hit its conning tower.

“We originally thought a 3-inch shell had hit the shears, the supports that hold the periscope,” Bruce says. “Recently, though, we met Cmdr. Charlie Tate, who did eight war patrols on Gato, a sister ship of Grunion. He told us the damage to the shears was almost certainly not caused by a 3-inch shell, but by something larger. Right now the hypothesis we are leaning toward is that it was a circular torpedo that did not explode.”

If that’s the case, Kano Maru actually shot at a washing wave caused by the bubble that rose to the surface when Grunion imploded. A jammed rear dive plane combined with a disruption would have left the submarine unable to blow its forward ballast tanks and falling fast.

In August 1942, the Navy recognized Grunion as missing. The Abeles never even got to say goodbye to their father, whom everyone, even his sons, affectionately called “Jim.” He took them to lunch at the Officers’ Club at the submarine base in Groton, Conn., before saying he had work to do. That work was a classified mission in the North Pacific.

“We didn’t see him a great deal because he was always at sea,” Bruce says. “Even when he was lost, and we didn’t hear about that until Sept. 30, 1942, it was kind of almost a paperwork thing. But as time went on it had an impact.”

As the years passed, Brad Abele started compiling what the brothers call “The Jim Book.” When Grunion disappeared, Bruce was 12, Brad was 9 and John was 5. Originally written for family and friends, “The Jim Book” describes the Abeles’ memories of their father – a Naval Academy graduate who loved soccer – and what it was like growing up without him.

The book also includes notes from students who learned under Abele at NROTC at Harvard. One of them, Endicott “Chub” Peabody, was an All-American defensive lineman on the football team who went on to become governor of Massachusetts. Peabody credited Abele with inspiring him to serve on submarines.

More and more, “The Jim Book” fueled the Abeles’ curiosity. What exactly had happened to their father?

The story that would become their groundbreaking quest to find Grunion began in 1998, when Air Force Lt. Col. Richard Lane paid a dollar for a wiring diagram of a winch from Kano Maru at an antiques store in Denver. Hoping to learn more about the ship, he posted a query online in 2001. A Japanese historian and translator named Yutaka Iwasaki replied, saying the diagram was indeed authentic and that he also thought he knew what happened to USS Grunion. Iwasaki had discovered and translated an old article published in a 1960s Japanese maritime journal by a naval officer who served aboard Kano Maru, describing the ship’s battle with a submarine near Kiska.

Meanwhile, Bruce’s son’s fiancОe shared a copy of “The Jim Book” with her boss, a World War II history buff, who sent Abele a list of Grunion-related Web sites. “I’d seen them before and I almost didn’t take a look,” he says. “Then I saw the post from Yutaka Iwasaki saying he thinks he knows what happened to Grunion and, most important, a rough idea of where it was. That was huge.”

The Abeles searched for Iwasaki’s e-mail address, and after a string of 70 messages, John found one from Iwasaki. He sent a message asking if he was the one who knew something about Grunion. Finally, a reply arrived: “It is me. I have prayed for repose for your father’s soul.”

Armed with knowledge of the submarine’s approximate location, the brothers became serious about finding the submarine. John Abele, who founded Boston Scientific, the global manufacturer and marketer of medical devices, suggested bringing in Robert Ballard of Titanic fame.

Though Ballard declined to join them, “he gave us a kindergarten course in finding a sub,” Bruce says: start with sidescan sonar, which can cover a swath width of two or three miles at a time, then send down an ROV.

In August 2006, the Abeles hired Williamson & Associates of Seattle to conduct sonar scans off the Aleutians, spanning an area about 250 square miles. An Alaskan crabbing boat, the Aquila, ferried the equipment.

“They were sending us e-mails every day, and I was getting up at 2 o’clock in the morning to see what was going on,” Bruce says.

A week into the search, scans detected a long, narrow silhouette 3,200 feet deep. Though 20 feet shorter than Grunion, the object appeared to have a curious appendage resembling propeller guards found on submarines of that type.

Just before the expedition, Iwasaki contacted the Abeles, saying he’d visited Japan’s military archives and found a chart listing the exact coordinates of the submarine. “It was almost right on the money,” Bruce says.

Certain they’d found what they were looking for, the brothers sent Aquila back a year later, this time with an ROV. Almost right away, it returned images of a badly damaged submarine: a 50-foot section of its bow missing, exposed pipes and hoses, interior bunks and a dive wheel, an aft battery hatch blown wide open. With water pressure at 1,300 pounds per square inch, Grunion imploded.

“There’s no question about what happened,” Bruce says.

The submarine’s discovery prompted a search for the families of Grunion’s crew. For that task, the Abeles had round-the-clock help from three women they call the “sub ladies”: Mary Bentz of Bethesda, Md., Vickie Rodgers of Mayfield, Ky., and Rhonda Raye of Cartersville, Ga.

Bentz lost her uncle, Carmine Parziale, on Grunion. Rodgers’ great uncle, Merritt Graham, went down too, along with Raye’s great-uncle, Paul Edward Banes. Together the women spent two years tracking down every one of Grunion’s 70 families.

They scoured genealogy files, phone books, marriage records and newspaper obituaries. On the same day the submarine’s wreckage was found by the ROV, Bentz went on a Detroit talk-radio show to ask for information on anyone who might know relatives of Seaman Byron Traviss of Michigan, the only family she hadn’t located. Amazingly, the wife of Traviss’ cousin heard the broadcast and called in.

"She said, 'I have his Purple Heart hanging on my dining-room wall,'" Bentz says.

The sub ladies also consulted a large volume of letters from Mannert Abele’s wife to families of the Grunion crew.

“My mother was extremely disciplined,” Bruce says. “After we got notification of Grunion’s loss, she handwrote a condolence note to every one of the next of kin, and then when Jim got the Navy Cross, she wrote a second note. We have three large loose-leaf notebooks all organized by crewmember with all the correspondence that went back and forth. You cannot read that stuff with a dry eye. It’s just incredible.”

With Grunion's families located, Bentz went to work calling the hometown newspapers of each crewman, asking for an article or obituary.

"My focus right now is to have them honored in every possible place," including the World War II Registry, the Navy Memorial and the National Purple Heart Hall of Honor in New York, she says.

Sadly, Brad Abele died in 2008, a few months before 200 relatives of the Grunion crew – including two sailors’ widows – gathered for a memorial service aboard USS Cod in Cleveland.

As the crew’s names were read, Grunion’s own bell tolled. Removed before battle because of its weight, the bell laid in a scrap heap at Pearl Harbor until the 1950s, when a chaplain asked if he could keep it. He took it home to Greenville, Miss., and later donated it to the city’s visitors center. As it happens, a Grunion crewman, Edward Knowles, came from Greenville. His sister, Geraldine Kendrick, told Bruce about the bell, and arrangements were made to borrow it for the memorial.

The story of Grunion’s discovery is filled with such coincidences, he says.

There’s also been healing. Before its own sinking, Grunion sunk two Japanese sub chasers. Iwasaki found the widow of one of those sub chaser’s commanders, now 99, and the Abeles sent her pressed flowers from Kiska, the island just south of the confrontation. With appreciation, she sent a hand-woven gift to "the sons of Catherine E. Abele."

Questions still surround what exactly transpired aboard Grunion before it sank, but at last the grave site of its crew is known.