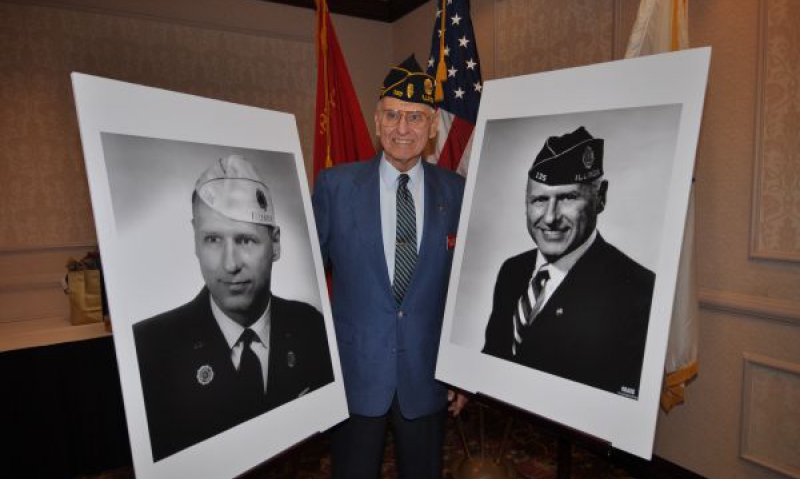 Past National Commander John H. Geiger, honored last spring in Illinois for his service to The American Legion, passed away Jan. 10. Photo by James V. Carroll

The American Legion was founded on four pillars: Americanism, Children and Youth, National Security, and Veterans Affairs and Rehabilitation.

But Department of New York Adjutant Richard Pedro says there is a fifth pillar that was just as important to the organization – Past National Commander John H. Geiger, who passed away early Monday morning in Illinois at age 85.

Pedro served on the National Commander’s Advisory Committee with Geiger from 1978 to 1999; the pair roomed together during numerous national conventions and other meetings. “His love, outside of his family, was The American Legion,” Pedro said. “He was very astute when it came to Legion history and Legion programs. But beyond that, he was just a brilliant guy. He was an exceptional person, and his word was solid. It was his bond.”

Pedro and Geiger were rarely seen outside of each other’s company at national events, joined by Past National Commander Jake Comer. The Legion’s national commander from 1987-1988, Comer said the loss of Geiger is difficult for several reasons.

“He was a great friend to me,” Comer said. “But we have lost a major leader of our organization. It will take a long time before someone steps up to the plate like John did. Here was a guy who would walk down the hall after a (National Executive Committee) meeting, and he would stop and talk to anyone who had a question or needed help. He would try to help in any way he could. (Pedro) and I depended on him tremendously.”

Comer said when he first started participating in the Legion on the national level, Geiger already was an icon. “I would see him, and I was in awe of him,” Comer said. “He already was up on a pedestal, as far as the way I saw it. He was The American Legion, from as long as I’ve been involved in the organization.”

Geiger served as national commander from 1971 to 1972. During his tenure, he traveled to Europe and the Far East, receiving briefings from U.S. and South Vietnamese military leadership during a stop in South Vietnam. He testified in front of Congress on several issues, including not dismantling or absorbing the Veterans Administration into a national health-care plan, and not granting blanket amnesty to Vietnam War draft dodgers. Geiger called for no amnesty to be granted while the war was ongoing, and then for a case-by-base review following the war.

Geiger also urged every Legionnaire to write three letters – one to their U.S. representative and one to each of their senators – calling for improvements to the GI Bill for Vietnam War veterans.

Even after leaving the office of national commander, Geiger, continued to have a strong presence in the NEC for years. It was that presence that stood out to Past National Commander Ronald F. Conley.

“As you became involved in the NEC, you saw John as a man who always maintained a level head, and who looked at every situation with an open mind,” Conley said. “He always said that if you were making a decision, was it for the good of The American Legion? He was able to steer you, not tell you what to do.”

Geiger urged Conley to seek out young people within the Department of Pennsylvania who would benefit the Legion. He advised Conley to always keep his suit coat buttoned in order to maintain a strong personal appearance.

“When I first walked into the Resolutions Subcommittee room (after longtime committee chairman and Past National Commander E. Roy Stone had passed away), it was strange not seeing Stone there,” Conley said. “It’s going to be that way going into the NEC room and not seeing John there.”

Past National Commander William E. Galbraith, who led the Legion from 1967-1968, said Geiger had an energy about him that “made him want to continue to improve things within The American Legion. He was one of the great leaders of this organization. It’s a tremendous loss.”

Past National Commander Marty Conatser, also an Illinois Legionnaire, said Geiger was a mentor to everyone in the department. “He was the one who prepared me to be national commander. He always told me to ask the question, ‘Is it good for The American Legion, above all else.’ That’s what he cared about. Not if it was good for John Geiger, not if it was good for someone else. That’s a rare quality in today’s world. He always put the organization first.”

Geiger felt that love of the Legion for decades. In a 1971 interview with The American Legion Magazine, he said, “I was so raised in veterans work and Legion work that I felt at home. I was just born to do it.”

Longtime Utah National Executive Committeeman Bill Christoffersen met Geiger in 1959 at a meeting in Indianapolis when both were department commanders. "He and I just hit it off, for some reason," Christofferson said.

The friendship continued for 52 years. When Geiger worked for United Airlines and was sent to work in Salt Lake City while a terminal was added to the airport, he and Christoffersen used to visit Christoffersen's Legion post together. There also were trips together to the Green River in Utah, as well as Geiger's seat next to Christofferson's in the NEC room.

"When people from my department asked me why Geiger was sitting next to me, I told them, 'We're buddies,'" Christoffersen said. "I could write a book on the things that John and I worked on together. I think we sowed a lot of good seeds for the Legion."

Longtime National Adjutant and Past National Commander Robert W. Spanogle remembers his first meeting with Geiger, who was a candidate for national commander at the time. Spanogle was one of 10 Vietnam veterans that Geiger invited to National Headquarters for a meeting.

“He asked questions; we responded,” Spanogle said. “We asked questions; he listened. There was no generation gap between he, a World War II veteran, and we of the Vietnam generation, because he had been there: a World War II GI Bill student veteran earning a degree in architecture and an active member of the Legion. His love of country, his love of family, his dedication and his firm commitment to the four pillars of the Legion were clearly evident during our discussion. The values of America. This is what I remember.

“He was a senior member of the National Executive Committee and a friend. I shall miss his counsel, his mentorship, his integrity and his firm handshake. John Geiger was a man of his word. Like so many others that knew John, his legacy of leadership will serve us well as we continue the work of The American Legion. We shall miss him.”

Mr. Geiger is survived by his companion, Florence Tanka, and by his six children, 10 grandchildren and four great-grandchildren.

Condolences can be sent to 758 Laurel Ave, Des Plaines, IL 60016. Memorials may be made to The American Legion Child Welfare Foundation, P.O. Box 1055, Indianapolis, IN 46206 or online here.

Donations also can be made to Pepper Family Hospice, 405 Lake Zurich Road, Barrington, IL 60010 or online.