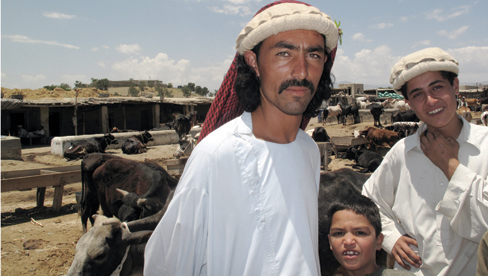 It’s early June, and members of the Indiana National Guard’s Agribusiness Development Team (ADT) are rolling north in a convoy of heavily armored Mine Resistant and Ambush Protected (MRAP) vehicles. They’re about to enter Afghanistan’s restive Bak district. The V-shaped hulls of the MRAPs are designed to deflect roadside bomb blasts, necessary for any kind of military transportation through the region. Gunners manning M240 and .50-caliber machine guns and M16 grenade launchers in open-topped turrets provide protection. The team is on its way to a meeting with local leaders to discuss veterinary clinics and agricultural training. Passing into a farming region dotted with mud-brick villages and walled compounds called “qalats,” the team is watchful. A few weeks earlier, another ADT convoy hit a trip-wire bomb on the same route, totaling a $1.5 million MRAP. But the vehicle did its job, keeping injuries to some minor concussions. As the team crawls down that same narrow, poplar-lined lane, the soldiers are nervous, knowing that insurgents have planted six or seven IEDs within 600 meters of them. “You’re just on pins and needles going down there,” Sgt. Maj. Robert Lee Goodin says. Soldiers begin calling in reports on the crackling intercom: “The village seems deserted,” one says. “There’s no traffic,” reports another.