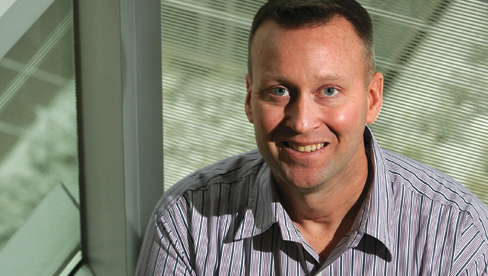 In the midst of an eight-hour firefight during his second deployment to Iraq, Brian Iglesias promised himself that, if he made it out alive, he’d one day follow his dream of making movies.

Iglesias, a Marine, came home with a disability. Add to that a recession, and a national unemployment rate near 10 percent – even higher for post-9/11 veterans – and the odds of him realizing his dream were small.

But many disabled veterans are bucking the odds, thanks to the Entrepreneurship Bootcamp for Veterans With Disabilities (EBV) – a national program started by Mike Haynie, a former Air Force officer and a professor at Syracuse University. The EBV provides young veterans with the tools they need to create small businesses.

Haynie, who talked about the EBV program at the Legion’s Washington Conference in March,  earned his Ph.D. in business strategy and entrepreneurship while in the Air Force. Shortly after arriving at Syracuse in 2006, he read about the high number of men and women who, after serving in Iraq and Afghanistan, leave the military with service-connected disabilities.

“One of the things I knew from my academic work was that people with disabilities turn to self-employment through business creation at a rate that is almost twice as high as the national average,” Haynie said. “Through self-employment, they can create a vocation for themselves that gives them the flexibility to both realize professional success, but at the same time accommodate some of the challenges they face.”

Haynie wondered if he could leverage something already done very well at Syracuse – teaching and training entrepreneurs – to create a program for disabled veterans, as both a social venture and a way to give back to the veterans community.

Mel Stith, dean of the Martin J. Whitman School of Management at Syracuse and a Vietnam-era veteran himself, supported the idea, and in July 2007, the first group of would-be business owners arrived on campus. Word about the EBV ­– which offers world-class training in entrepreneurship, at no cost to the veteran – spread quickly in the academic community.

“What we didn’t expect is that we would have other universities from around the country come to us ... and say, ‘We want to be part of this,’” Haynie said.

Florida State, UCLA and Texas A&M joined the EBV Consortium in 2008. Purdue came on board in 2009, and the University of Connecticut in 2010. Louisiana State will offer the EBV in late 2011.

EBV training has three phases. The first includes a self-study curriculum that the veteran completes prior to arriving on campus, giving participants of varied backgrounds and education levels a common understanding of business concepts.

The second phase is a nine-day residency program, during which the veterans are immersed in entrepreneurship and small-business creation. While the hours are long, the accommodations are definitely not boot camp. Part of the EBV model is to give the veteran an executive-quality experience. Participants stay in first-class hotels and eat first-class meals.

EBV instructors include accomplished academics in the field, as well as successful entrepreneurs and Fortune 500 executives.

“How often do 25 veterans get to sit in a room for an hour and a half with the CEO of Walmart, talking about marketing? It’s a once-in-a-lifetime experience,” Haynie said.

In the EBV’s third phase, veterans are plugged into a robust technical-assistance network to help them get their businesses off the ground after they return home.

University faculty, along with alumni who have gone on to become successful entrepreneurs themselves, help the veterans develop marketing plans and prepare financial statements. Companies that have signed on as national EBV partners provide free legal assistance and a variety of small-business services.

PepsiCo is a corporate sponsor and provides a significant amount of financial support for the EBV, but most of the program’s funding – aside from university resources – comes from private donors.

“There is amazing good will out there focused toward these veterans,” Haynie said. “All we’ve had to do is tell the story to our alumni of how we’re trying to leverage their university to help veterans with disabilities to go out and realize the American dream of becoming a business owner.”

Iglesias, the Marine platoon commander with a passion for making movies, earned a degree in filmmaking while in the service. But an exploding IED left him with a ruptured disk in his neck and permanent nerve damage in his arm. When he left the military in 2008 and settled in New Jersey, he had a pregnant wife, a mortgage, and no job prospects in his profession of choice. He expected to spend 10 to 15 years working in the field before obtaining the experience to start his own production company.

“My game plan was thrown out the window once I put on civilian clothes,” Iglesias said. “So I heard about EBV and owning your own business. I thought, ‘I’ll never get there otherwise.’”

Iglesias attended the Syracuse program in 2008.

“There are a lot of programs that can help you with your bills, take you to a ballgame, etc., but those are Band-Aids while you are healing,” he said. “The EBV program is like a fast track to your future.”

After completing the EBV, Iglesias was introduced to Anton Sattler, another combat veteran interested in filmmaking, by a corporate recruiter who couldn’t get either of them interested in pharmaceutical sales. The two formed a partnership and began collaborating on a documentary about the Korean War’s Chosin Reservoir campaign.

Because of Chosin’s place in Marine Corps history, Iglesias wanted to capture its heroes’ legacy before they passed away.

Tapping their retirement accounts and insurance policies, Iglesias and Sattler traveled to 27 cities in 14 states over eight months, interviewing 186 Chosin survivors. They filmed the interviews in American Legion and VFW posts and Marine Corps League facilities, and sometimes slept there. After five months of editing, the film, “Chosin,” premiered at the GI Film Festival in Washington in 2010 and was awarded Best Feature Documentary. Through a sponsorship from PepsiCo, the film was released in theaters in New York and Los Angeles, and will air in September on EPIX, a premium TV channel.

A $100 million theatrical film about the Chosin campaign called “17 Days of Winter” is being developed by MADMEDIA Entertainment, and Iglesias has been hired as an executive producer. While he collects a paycheck from Hollywood, his New York-based company, Veterans Inc., is booked through 2012, filming commercials and other projects.  Luanne Radecki Blackburn is a freelance writer in Indianapolis.