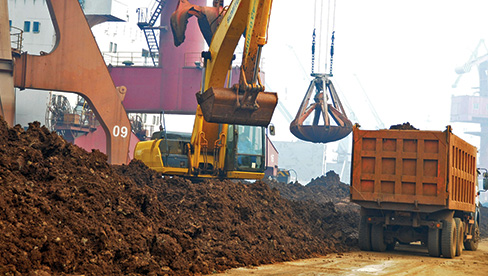 China produces 97 percent of the world's rare-earth elements (REEs) - a family of metals and minerals critical to a range of technologies with commercial and military applications - and has begun to manipulate the global REE market by dramatically slowing, and in some cases even halting, export of these materials. In fact, after a maritime dispute with Japan last year, China stopped supplying REEs to Japanese customers and then reduced overall global exports by 72 percent in the second half of 2010, before cutting export quotas for the first half of 2011 by 35 percent. As a result, prices for some REEs jumped tenfold.

Although Beijing has resumed delivery of REEs and vowed that it will "not use rare earths as an instrument for bargaining," China's actions have prompted the United States, Japan and Europe to explore alternative sources.

The good news is that market forces are already at work diversifying the supply chains of this strategic resource. The better news is that one of those alternative sources happens to be a country that desperately needs an economic lifeline: Afghanistan.

Wake-Up Call. Before getting into what Afghanistan can contribute to the rare-earth solution, it's important to understand what rare earths are, and what role they play in fueling the global economy and even in defending the United States.

First: technically, the term "rare-earth element" is a misnomer. "Rare they aren't," says Ian London of Avalon Rare Metals. "If you took a shovel and dug a hole in your backyard, you'd probably find some rare earths. We have more than enough supply. What is rare is finding them in economic quantities."

Moreover, processing and refining rare earths can be complicated and messy.

The active sources of REE-bearing materials are in China, Mongolia, Malaysia, Russia and India. California, Brazil, Canada and Australia could start producing by 2015, and Idaho, Montana and Florida could come on line sometime after that. Fully exploiting Afghanistan's REE wealth will take more time, given the country's inadequate economic and industrial infrastructure.

Recognizing the importance of rare earths to its own economic growth and military capabilities, China declared most REEs "strategic commodities" in 2007. As a consequence, the Department of Energy (DoE) notes that China has restricted foreign investment in REE development, raised export taxes on them, reduced their export quotas, started stockpiling them, and given priority to its own domestic demand.

China "has predominant control" over the mining and supply of the 17 REEs, according to CRS. That became painfully evident in 2010. Not only did Beijing block shipment of all rare earths to Japan; it also restricted the export of rare-earth oxide and metal to the United States and Europe.
Secretary of State Hillary Clinton called China's suspension of REE shipments "a wake-up call."

Not only is the REE supply chain dangerously undiversified, but global demand is far outpacing supply. CRS reports that the world consumes 134,000 tons of rare-earth minerals and metals annually, but produces only 124,000 tons.

After China's mini-embargo of REEs last year, Clinton called on the United States, Japan and their allies "to look for additional sources of supply ... to protect the important production needs that these materials serve. That is in our interests commercially and strategically."

Toward that end, Japan, which imports more REEs than any other country, is assisting Mongolia in developing its rare-earth mines. Thanks to its rare-earth deposits and openness to foreign investment - Mongolian president Elbegdorj Tsakhia recently reported that "Mongolia's GDP is set to triple over the next decade."

One of the main reasons the United States stopped producing rare earths was the environmental side effects of rare-earth mining, which can include toxic waste. This led to a host of regulations that had the effect of discouraging rare-earth production - and sending it to China.

Rare-Earth Rebirth. A recent DoE report concludes that rebuilding a diversified REE supply chain means "taking steps to facilitate extraction, processing and manufacturing here in the United States." U.S. firms are already taking those steps. One company plans to mine 20,000 tons of REEs from California annually.

In addition, new legislation would "re-establish a competitive domestic rare-earths minerals-production industry" by "reviewing laws and policies that discourage investment in, exploration for, and development of domestic rare earths."

Other proposals percolating in Congress would direct DoE to pave the way for exploration and recovery of rare-earth materials. Some would offer loan guarantees for research and exploration, others would carry out a "global rare-earth element-resource assessment," and still others would create a rare-earth stockpile.

That last item is crucial, given that the United States does not currently maintain a strategic reserve of rare-earth compounds, metals or alloys. That needs to change. As one key piece of pending rare-earth legislation observes, "Self-sufficiency requires an uninterrupted supply of strategic materials critical to national security and innovative commercial-product development, including rare earths."

A 2010 DoE report argues that rare earths and other strategic resources should be featured pieces of a revived National Defense Stockpile, large parts of which were liquidated beginning in the 1990s.

The United States is not alone in the rare-earth rebirth. Canada and Australia are gearing up REE-production efforts. "Australia stands ready to be a long-term, secure, reliable supplier of rare earths," foreign minister Kevin Rudd said after China closed off the REE supply lines last year.

The U.S. government reports that fully rebuilding America's rare-earth supply chain "may take up to 15 years."

A Big "If." Afghanistan can be part of the long-term solution to this problem. Given the growing disparity between REE production and consumption, along with China's lack of dependability, Afghanistan's mineral wealth could become a win-win situation both for the people of Afghanistan, and for the global market of producers and consumers of high-tech equipment.

But a note of caution is in order. If rebuilding the rare-earth mining and manufacturing base in the United States - among the richest, most developed and most stable countries on earth - is going to take a decade or more, then building a rare-earth mining system from scratch in one of the most broken countries on the planet is not going to happen overnight. The conditions in Afghanistan are anything but ideal: corruption is high; stability exists only in pockets, speaking to the country's overall instability; and the ingredients that encourage foreign investment - rule of law, human capital, public infrastructure - are in short supply.

But what Afghanistan lacks in economic and public infrastructure, it makes up for in rare-earth riches. The U.S. Geological Survey and the Pentagon have found huge stores of natural-resource wealth in Afghanistan. In addition to niobium,
aluminum, gold, phosphorus, zinc, magnesium cobalt and copper, Afghanistan's newfound riches include oil and an estimated $420 billion in iron. A Pentagon memo calls Afghanistan the "Saudi Arabia of lithium," which is technically not a rare earth. However, as a key component in batteries used in computers, cell phones and electric cars, it serves some of the same purposes as rare earths.

Citing these discoveries, retired Gen. David Petraeus believes Afghanistan has a "stunning potential" for development, growth and perhaps the most dramatic reversal of fortune in history. "Afghanistan is blessed with the presence of ...trillions of dollars worth of minerals," he observes.

Estimates range from $1 trillion to $3 trillion in mineral wealth. To underscore the impact such development could have, Afghanistan's entire GDP is just $27 billion. The Afghan government collects about $1 billion in tax revenue annually, but could increase that figure by as much as $3.5 billion with royalties, taxes and fees from the mining sector, according to Afghan officials. In short, after three decades of war, there may be a silver lining in this broken, battered land.

But those rare-earth resources that the world needs to fuel the 21st-century economy, those trillions in untapped wealth that could help turn Afghanistan around, can be accessed, as Petraeus cautions, "if, and only if, you can get the extractive technology, the human capital operated, the lines of communication to enable you to get it out of the country. A very big ‘if.'"

China appears ready to take that chance, no matter the cost. There are reports that Beijing won the rights to develop a copper mine south of Kabul by bribing mining officials with $30 million.

Given China's stranglehold on the rare-earth market - and America's commitment in blood and treasure to Afghanistan's future - allowing China to stroll in and harvest Afghanistan's rare-earth riches seems both unwise and unfair. The United States should use its considerable leverage with the Afghan government not to secure sweetheart deals for American investors and developers, but to ensure a level playing field for any firm willing to take a risk on Afghanistan's rare earths.

Some observers warn that if REE mining in Afghanistan really does take off, the country could succumb to the so-called resource curse - the notion that natural-resource wealth diverts investment away from other sectors and encourages high levels of government spending. Examples include Nigeria after oil discoveries, and the Netherlands after natural-gas discoveries.

But Stephen Haber and Victor Menaldo, political scientists specializing in the research of mineral booms, note that roughly twice as many countries have been blessed by resource booms as cursed by them. "Until its late-19th-century oil and mineral boom, Mexico was not a whole lot different from Afghanistan," they note, citing poor infrastructure, a largely illiterate population and a weak central government hampered by warlordism.

Oil and mineral discoveries did not cure all of Mexico's ills, of course, but they did help stabilize its political system and legitimize the state.

If something like that happens in Afghanistan - if its leaders can create a level playing field open and attractive to foreign investment, if its people can recognize that they have more to gain from compromise and cooperation than from cronyism and corruption, and if its disparate tribes can see themselves as part of one Afghan tribe - then the world can help solve Afghanistan's instability problem, and Afghanistan can help solve the world's rare-earth-supply problem.

But as Petraeus says, that's "a very big if."

Alan W. Dowd is a contributing editor for The American Legion Magazine. He writes the Landing Zone column at www.legion.org/landingzone.