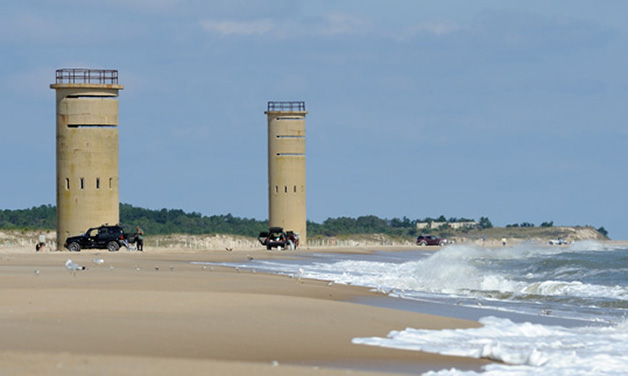 For 70 years, visitors to Delaware’s beaches have gone swimming in the shadow of strange concrete towers that are a grim reminder of a time when America was at war on these shores.

Built between 1939 and 1942, the 11 observation towers along the state’s coastline were designed to last 20 years. But standing on treated wooden pilings, they are likely to last another half-century.

The towers, spread over 40 miles, housed military spotters who scanned the sea for enemy vessels that might threaten industry up the Delaware River – the Philadelphia shipyard, chemical plants at Wilmington, and oil refineries critical to the Allied effort.

Eight soldiers, perched at heights of up to 80 feet, would call in coordinates if they sighted any German U-boats or warships. When two towers sighted the same target, a fix could be determined.

Just north of the resort town of Rehoboth Beach, in what is today Cape Henlopen State Park, twin 16-inch guns were hidden in the wooded hills at Fort Miles, ready to blast huge shells up to 25 miles out to sea. They covered the entrance to Delaware Bay, along with four 12-inch guns, four 6-inch guns, eight 8-inch guns mounted on railroad cars, and other artillery.

The threat was quite real, as German submarines sank U.S. ships along the East Coast and survivors often ended up on Delaware beaches. One German sub surrendered off Fort Miles at the end of the war in 1945.

Visitors can now see the 16-inch guns up close, their massive barrels still pointed out to sea. And Tower 7 at Fort Miles is open to the public, offering visitors a chance to see where the soldiers worked, peering through slits in the concrete during eight- to 12-hour shifts.

At the very top, a person can look across green hills to the coastline, the beaches and other towers, standing alone like strange creatures left over from a science-fiction movie set. Four more stood across Delaware Bay at Cape May, N.J., but only one remains. Restored by the Mid-Atlantic Center for the Arts & Humanities in 2008, Fire Control Tower 23 is open to the public, as well, with a spiral staircase to the watch room, interpretive panels and wooden ladders resembling the originals used by soldiers stationed there.

On hot summer days, as beachgoers swim in the surf or fish from the backs of SUVs, the grim-looking watchtowers both disturb and comfort. They remind us that there was a time when war was necessary – and may be necessary again – to protect our shores. And when it came, Americans rose to the challenge.

Together, the Delaware Seashore Preservation Foundation (DSPF) and Fort Miles Historical Association are raising $300,000 to renovate Tower 3, which is in the middle of one of the heavily visited state beaches south of Rehoboth.

“Our goal is to preserve the tower,” says Ernie Felici, the foundation’s chairman. “Fort Miles has a tower with access to visitors. We want to do the same at Tower 3 in Dewey. It’s got parking, and it is right on Route 1, which is very heavily trafficked.”

To go to Cape Henlopen, you have to make a special trip away from the beach, he points out. If a tower could be opened for beach crowds, Delaware would have another valuable tool for teaching people about the state’s role in World War II.

“People can’t drive past without asking, ‘What are those towers? What is inside?’” Felici says. “This is a very important link to the history of the United States in our own backyard. It’s amazing that these towers, with a 20-year life span, have lasted this long and are still sound. They honor all who served.”

Ben Barber is a frequent contributor to The American Legion Magazine.

To view more photos of the Delaware watchtowers, click here.