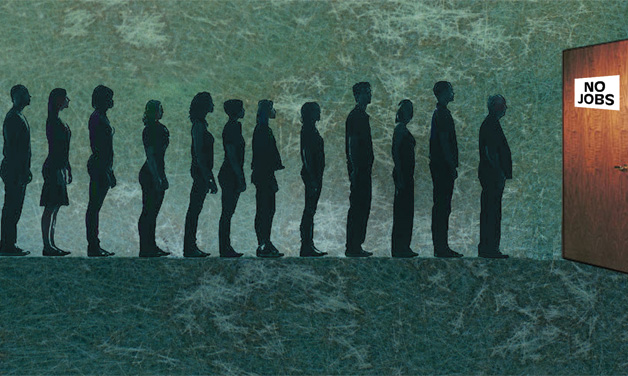 Kai Jorgensen was laid off just before Thanksgiving 2011, the third time the recession has cost him his job since he left the Marine Corps in May 2009. He wasn’t prepared for such a cold reception from the civilian world after four years of keeping troops on the front lines supplied with gear and working as a ground safety officer.

“I didn’t expect this at all, especially coming out in the field of logistics,” says Jorgensen, 25, a Beaverton, Ore., native who has applied for hundreds of jobs. “I’m very discouraged.”

Yet the fact that Jorgensen has found any employment – even minimum-wage work – makes him one of the more fortunate returning servicemembers. The job hunt has been even more difficult for Oregon Army National Guardsmen like Shad Vaughn. Half of the soldiers in Vaughn’s company didn’t have jobs when they came home in April 2010 after a yearlong deployment to Iraq, he says.

Vaughn’s family has lived off credit cards and hardship grants – and his children are on state assistance – while he looks for work and fights to get medical care for injuries he sustained when an 850-pound armored-vehicle tire fell on him three weeks before he left Iraq. “For guys who have not been hurt, it’s hard,” Vaughn says of the job search. “For guys who are hurt, it’s ridiculous.”

The men and women who have served since 9/11 have the highest unemployment rate among their peers, according to a 2011 congressional study. The magnitude of the problem is often understated, because the most commonly cited government numbers don’t tell the whole story. The U.S. Bureau of Labor Statistics is often quoted as estimating unemployment among returning veterans 18 to 24 at about the same level as nonveterans in that age group.

But Bloomberg News dug deeper into the government data and found a far grimmer picture. Veterans 18 to 24 had a 30.4-percent jobless rate as of October 2011, about double the unemployment rate of nonveterans in the same age range. That’s also a significant jump from the October 2010 unemployment rate of 18.4 percent among the youngest veterans, Bloomberg reported. Black veterans 18 to 24 were faring the worst, with a 48-percent jobless rate.

Fleeting Success. Jorgensen’s initial return to civilian life was more promising. He found work as a loss-prevention agent for a major department store soon after leaving the Marines but was laid off a year later. “Since then, it’s been real hectic and hard,” he says.

He found a no-benefits job driving a delivery truck in September 2010 but was laid off right after Christmas that same year. He turned to a minimum-wage job at a golf course and enrolled in college. Although he was told there was room for growth, Jorgensen soon discovered that people with four years at the golf course were only making an additional 50 cents an hour. “I decided to continue school without that distraction,” Jorgensen says. The decision came after he realized that he was barely earning enough to pay for his gas to drive to work. “A lot of us who spent four years on active duty don’t have a college degree, although when I read the requirements, I know I can do a lot of the jobs (that call for a degree).”

His luck appeared to turn in September 2011, when he found a job as a delivery driver and warehouse specialist. That ended shortly before Thanksgiving because the company lost a major contract due to government cutbacks.

“It’s gotten to the point I’m applying for jobs all over the country,” Jorgensen says.

Vaughn doesn’t have that option. A .50-caliber gunner and mechanic, his six-year hitch with the National Guard runs until 2015. Meanwhile, in addition to looking for work, he is focused on some missing paperwork that’s made it nearly impossible for him to get treatment for back, neck, shoulder and other injuries he suffered when a tire fell 14 feet from a forklift and knocked him unconscious near the end of his tour in Iraq.
The Army put him on light duty and told him to wait to seek treatment until he got home, Vaughn says. Once his unit returned to the United States, he went to VA, where his claim has been stalled because of the missing paperwork, he says. His primary-care physician, meanwhile, dismissed his complaints of neck pain without obtaining a CT scan that would later show fractured vertebrae.

“We’ve been fighting tooth and nail to get records of my injuries the last two years,” Vaughn says. “It’s been rough, especially for my wife and two kids. The sad thing is, I know there are a lot of guys out there with the same problems, but they don’t want to get involved in it. I can’t give up because I’ve got so much invested in it.”

American Legion service officer Gregory Demarais became aware of Vaughn’s case in early December and worked to push forward his VA disability claim. Demarais also secured temporary financial assistance through the Legion to help pay Vaughn’s rent, and obtained donations for Christmas presents for Vaughn’s family through The Salvation Army, American Legion Post 122, the American Legion Auxiliary and VA employees. This is nothing out of the ordinary for Demarais. He distributed $19,000 in emergency funding to unemployed Oregon veterans in the first 10 days of that month alone.

National Attention. Meanwhile, there are efforts in Washington to deal with the problem. The Legion and other organizations successfully pushed Congress to pass the Hire Heroes Act late last fall. The legislation gives private businesses up to $5,600 in tax credits for hiring unemployed veterans, and as much as $9,600 to businesses that hire unemployed veterans with service-connected disabilities.

The Obama administration has also increased the number of veterans working for the federal government, despite an overall hiring decrease. The Defense Department, VA and the Department of Homeland Security employ the most veterans of any federal agencies. In late February, the U.S. Department of Agriculture signed a memorandum of understanding with The American Legion to launch a nationwide veteran-hiring initiative that aims to employ veterans in rural areas. VA has increased its veteran-employee numbers from 59,563 in fiscal 2004 to 101,651 in fiscal 2011. Veterans now make up about 29 percent of the work force at U.S. Customs and Border Protection (CBP), an arm of Homeland Security. CBP added more than 800 veteran employees each of the last two years alone with an aggressive recruiting program, says Judy Hatter, who oversees veteran recruiting for the agency. That includes more than 340 job fairs and other events aimed at attracting applicants with military experience.

USAJOBS, an online application program that is mandatory for most federal jobs, is notoriously confusing and time-consuming, according to many government job seekers. CBP sets up laptop computers at job fairs and walks veterans through the process. The Department of Homeland Security has also established a Warrior Transition Program that allows it to bypass USAJOBS and hire qualified veterans for some positions. The USDA initiative also envisions a more streamlined application process for veterans seeking particular jobs.

Doug Peters, a Marine Corps veteran who participated in the invasions of Afghanistan and Iraq, found a home at CBP last September. His advice to veterans: “Make every effort to go to school, even if it’s part-time, even if you have to work a job and take night classes.”

Peters’ experience, however, demonstrates that education alone isn’t enough. He earned a bachelor’s degree in history and a law degree after leaving the Marines in 2003. Even then, it took him 18 months and hundreds of applications to find a job after he graduated from the University of Detroit Mercy School of Law in May 2010.

“I was really having a difficult time even getting people to call me back,” says Peters, 32, now a labor and employee relations specialist with CBP in Washington. His break came when a representative from Naval District Washington’s Wounded Warrior Employment Program forwarded his résumé to CBP.

“Veterans, especially people who have experienced combat training or combat, are well suited for ship repair,” says Daava Mills, a corporate recruiter for Vigor. “Things turn on a dime.”

The company does short-notice ship repair for everyone from oceangoing cargo companies to the U.S. Navy. That can mean showing up at 2 a.m. to get a ship in dry dock. “We have to make our deadlines, or companies have to rent ships,” Mills says.

The company’s employees range from Vietnam War veterans to men and women who recently returned from serving in Iraq and Afghanistan. They hold jobs from general labor to director of operations. Even the laborer jobs are not typical, Mills says. Workers have to be able to read blueprints and perform other technical tasks, such as figuring out how to safely block up a ship in dry dock. Veterans often have these skills.

Many of the veterans working at Vigor were Navy or Air Force avionics and electrical specialists. Because they are doing maritime electrical work, they are not required to get additional state licenses to work for Vigor. That’s an important advantage for veterans, who often find that employers don’t recognize their military licenses because of state and federal regulations.

Mills personally understands the challenges veterans face finding work. Her father struggled to find meaningful employment after 24 years in the Air Force, including a tour in Vietnam.

“He went from planning missions and planning wars to packing boxes, so I have an appreciation for what these guys go through,” Mills says. “Unfortunately, we aren’t in a position to hire all of the guys and girls who come home.”

Older veterans are also struggling. Tony Hoffman has applied for jobs with VA in Florida and Indiana for more than a decade, and he’s only landed one interview. Instead of a job, he says, VA offered him a volunteer position passing out magazines and pencils.

“I go up there every time there’s an opening,” says Hoffman, who served as a licensed practical nurse in the Army from 1984 to 1991. “I have an Expert Field Medical Badge. I ran a clinic in the Army for two and a half years. They said they didn’t understand all of that. I can qualify to work as a janitor, but not as a nurse who can start IVs and has skills above and beyond the average LPN. It’s disheartening.”

Hoffman worries about the hurdles facing job-seeking veterans who served in Iraq and Afghanistan. “There’s going to be a whole lot of medics coming home soon,” he says. “I think the young guys are going to get discouraged.”

Robert Randy has been so dismayed by his job searches that he’s considered leaving his four years with the Marine Corps off his résumé to see if it makes a difference. He earned a degree in international business after getting out of the service in 1990, and worked at a variety of companies until opening three cellular telephone retail stores in San Diego. Two of the stores went out of business after the economy soured. He sold the third after his wife landed a job in Oregon in 2007. He hasn’t been able to find a job since, even after applying for work as a state and county veterans service representative.

“I don’t know what I am going to do from here,” Randy says. “I want to work. I need to be able to work for my health.”

Veterans like Vaughn and Jorgensen also find it difficult to be optimistic. “It’s been one battle after another from every which way,” Vaughn says. “There’s no reason for the guys coming back to get this much crap.”
Jorgensen just wants the opportunity to get beyond the typical computer application process to sell himself in person.

“You want to come back, help your community, get an education, start a family,” Jorgensen says. “For me, it would be great just being able to get into the interview process. I think if I could just get face to face with employers, I could get a job.”