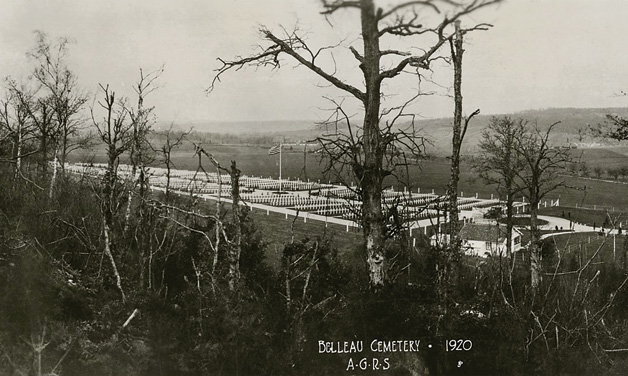 The Americans who won the first world war grew up decorating the graves of Civil War dead.

Yearly membership dues for AOMDA are $50 or 50 euros. Life memberships are $500 or 500 euros. Request a membership application or download the form online.

AOMDA is a 501(c)(3) nonprofit organization. Contributions, including membership, are tax-deductible in the United States and France. Donations, grants and bequests in any amount are welcome.

Leaving Europe for home, they trusted others to do the same for their 78,000 comrades resting eternally beneath white wooden crosses blanketing the French and Belgian countryside.

“It is the first Memorial Day in the blood-ground of the old A.E.F. without the A.E.F.,” wrote J.W. Rixey Smith in the May 28, 1920, American Legion Weekly. “The actual presence of tribute and ceremony to American dead abroad must be left to American agencies in Europe, to the Allied governments and to the folk among whom they are buried.”

A Memorial Day committee led by Hugh Wallace, U.S. ambassador to France, and Lt. Col. Francis Drake, commander of the Legion’s Department of France and founder of Paris Post 1, planned a grand observance across the continent. Tribute would be paid from Romagne in the Argonne, where 22,000 soldiers were buried, to Lille, where three sailors had been laid to rest.

“No American field of honor on the other side will be without its Memorial Day ceremony, no American grave without its flag and its flowers,” Smith reported.

Drake and the Rev. F.W. Beekman, an Army chaplain and dean of the American Cathedral in Paris, raised funds through newspaper appeals and by asking Legion posts in the United States, Americans living in France and soldiers along the Rhine to contribute to the proper decoration of graves. French citizens, who wanted to take part in the ceremonies, gave unsolicited donations.

Few occasions have been as poignant, or as unifying. At Thiaucourt, U.S. and French soldiers watched farmers and their families weep for the Americans who died to free their towns. On the edge of Belleau Wood, a detachment of Marines helped the people of Torcy and Belleau spread red poppies, white daisies and blue cornflowers on graves. At Romagne, the mayor and priest marched before a wreath so large it required 23 men to carry it, while schoolchildren linked every cross with a chain of daisies and sang hymns.

Within two years, the bodies of 46,284 American servicemen were returned to the United States, at their families’ request. Another 30,921 from World War I will forever remain in U.S. cemeteries overseas, where the heirs to Drake’s Memorial Day committee are faithful to place a flag at every one of their headstones every May.

“The Legion essentially started AOMDA,” says Ray Shearer, a Marine Corps veteran and Legionnaire who has served on the association’s board of trustees since 2000. “The same group that formed Paris Post 1 was instrumental in establishing the association.”

Herman Harjes, an American banker who joined the Army and became Gen. John “Black Jack” Pershing’s liaison to the French, served as Post 1’s first commander. A.W. Kipling, an Army captain who supervised the evacuation of American wounded from the battlefield to Paris hospitals, was post adjutant. Cabot Ward, in charge of counterintelligence at St. Mihiel, was vice commander. Nelson Jay, another banker who worked for Pershing, was a founding member of the post.

All served on AOMDA’s board under the leadership of Drake and Beekman, Post 1’s chaplain. Acting primarily as Legionnaires, they arranged Memorial Day ceremonies, sent delegations from the post to cemeteries outside Paris and, by 1923, raised over a million francs from the Legion and the public to help cover the costs of graves decoration.

Recognizing that the income from that fund wasn’t enough to meet each year’s need, Drake asked the Legion to establish a permanent endowment. A two-month campaign succeeded in raising $161,500. Interest generated by the Overseas Graves Decoration Trust fund today purchases all U.S. flags placed at the graves of America’s war dead in Europe. Since 2007 alone, the Legion has provided nearly 63,000 flags.

Even in 1940, when Americans were fleeing Paris and all the cemeteries except Suresnes were in German hands or on the battlefront, the Legion and AOMDA commemorated Memorial Day by placing marble crosses and poppy wreaths – one for each site – at the altar of the American Cathedral.

After World War II, the American Battle Monuments Committee (ABMC) added 13 cemeteries in Europe, bringing the total to 21. AOMDA coordinates graves decoration and Memorial Day ceremonies at all of them – 11 in France, three in Belgium, two in England, two in Italy, one in Luxembourg, one in Holland and one in Tunisia.

AOMDA also arranges for the decoration of individual isolated burials, supplying U.S. flags for 183 sites in France, eight in Belgium, and others in Germany, Denmark, Norway and Sweden. In anticipation of Memorial Day, volunteers gather in Paris every January to mail fresh flags to local officials, families, Legion posts, civic groups and U.S. embassies assuming responsibility for graves.

At the cemeteries, AOMDA and ABMC staff work with neighboring towns and villages to make certain that Old Glory graces every headstone.

“It’s phenomenal,” Shearer says. “The day before the ceremony, local schoolchildren and their parents come out and place our flags at our guys’ graves. The Aisne-Marne cemetery has 2,289 burials, and they’ll have all the flags placed in a couple of hours. Normandy has 9,387. The Lorraine cemetery has 10,489. The Meuse-Argonne, the biggest one in Europe and the biggest of World War I, has 14,246. Every one gets a flag placed at it.”

“Long After We’re Gone.” Like a lot of groups born in the aftermath of the world wars, AOMDA is facing a steep membership decline. With fewer U.S. veterans living in France, there are fewer people and resources to support AOMDA’s mission.

In March, AOMDA voted to create a permanent endowment to fund all Memorial Day activities at U.S. overseas cemeteries. Gerard figures that if even 3 million of the 24 million living U.S. veterans each contributed a dollar, AOMDA would be able to support Memorial Day ceremonies “long after we’re gone.”

These events are worthy of the dead they honor. In 2011, thousands congregated at American cemeteries across France to hear military bands play “La Marseillaise” and “The Star-Spangled Banner,” and U.S. and French officers reflected on their nations’ history of shared sacrifice dating back to the Revolutionary War. In Belgium, four A-10 Thunderbolts out of Spangdahlem Air Base in Germany flew over a crowd gathered at the Ardennes cemetery, U.S. and Belgian troops paraded their nations’ colors at Henri-Chapelle, and a student from the Brussels American School recited John McCrae’s famous poem at Flanders Field. At Cambridge American Cemetery in England, dignitaries, military personnel and veterans laid more than 120 wreaths.

For 25 years, Gerard has presided over ceremonies at the Somme American Cemetery in Bony, France. His father – a brigadier general who served in World War II and the Korean War – did so from 1964 to 1986.

“The mayors of these towns throw open their doors on Memorial Day,” Gerard says. “They really want to show their thanks. There’s always a toast to French-American cooperation and friendship after every ceremony. It’s a very moving day. If more Americans saw it, they’d say, ‘Wow.’”

He and Shearer plan to boost AOMDA’s profile with a more interactive website that tells the stories of isolated war graves overseas. They’re also reaching out to military unit associations and veterans groups – Legionnaires, in particular, whose founders vowed that on one day each year, for all time, the graves of their comrades would be decorated and their sacrifices acknowledged.
“The people of AOMDA do this as a labor of love,” Gerard says. “It’s up to people like Ray and me to pick up the torch and carry it forward. We are the ones who are going to make sure these soldiers are remembered.”