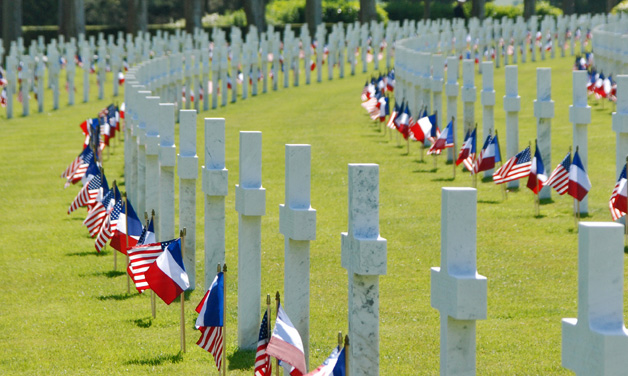 As Marine Corps Commandant James Amos kneels, Belleau Wood is silent, save for scattered bird songs and the rustling of leaves overhead.

He sets a small token at the base of the Marine monument – a commemorative coin given to him from members of Task Force Belleau Wood serving in Afghanistan.

Soon, hundreds will fill the nearby cemetery for a Memorial Day ceremony. But here, now, in the heart of Belleau Wood, Amos and the Marines behind him are privately honoring those who died taking this forest in one of World War I’s ugliest battles.

Lt. Gen. Hervé Charpentier, commander of the French Land Forces, joins Amos in placing a wreath and rendering a salute.

At the ceremony, the two officers talk of what the Americans did at Bois de la Brigade de Marine, or “Wood of the Marine Brigade,” and what it meant.

“Their sacrifice for this morsel of French ground sealed in blood the bonds that unite our two countries,” whose forces have fought side by side on battlefields since, Charpentier says.

Amos praises an alliance that “continues in the mountains and valleys of Afghanistan, and recently over the skies of Libya as French Rafales and MC Harriers flew in support of Operation Odyssey Dawn.”

Though U.S. soldiers outnumber Marines buried at Aisne-Marne, the Marines have a special attachment to the cemetery and the woods beyond. This is where the modern Marine Corps was born – where on June 6, 1918, it lost more men than it had in its entire history up to that point.

On Memorial Day, they are remembered and celebrated. A bugler plays Taps. A French student reads a poem. The Marine Drum & Bugle Corps gives a rousing performance, and the Marine Corps Silent Drill Platoon wows the crowd with precision marching and rifle maneuvers.

After the ceremony, hundreds of Marines – from the 5th Regiment, the 6th Regiment, Marine Forces Europe in Stuttgart, Germany, and elsewhere – gather for a reception in the courtyard of a nearby chateau, where they take turns sipping from the famous “devil dog” fountain.

“This is my third visit, and every time I come back I get goose bumps,” says Sgt. Maj. Jamie Deets of the 6th Marine Regiment. “In the United States we’re fighting to save our battlefields. Here at Belleau Wood, there’s no commercialization, no buildup of housing – a fitting tribute to our Marines and soldiers who gave the ultimate measure here.”

Lt. Col. Mark Sojourner, who is stationed at Stuttgart and works for AFRICOM, brought his wife, Lori, and their two daughters over on a USO tour. He calls the trip “a pilgrimage every Marine would like to make.”

In Bouresches, a villager ran up to Sojourner with a bottle of wine and old photographs. “He just said ‘thank you’ over and over, that he loved Marines and appreciated that we’re here,” he says.

For Mike Miller, director of the Marine Corps archives, Memorial Day capped an incredible week of exploring Belleau Wood for the first time. He spent two days walking the battlefield, sometimes crawling on his hands and knees across ravines.

“You can see fighting holes, shell holes, trenches worn down,” he says. “There’s an uncomfortable quiet when you’re in there. This is nasty terrain.”

Years ago, Miller interviewed Gene Lee, who was the battle’s last surviving combat veteran when he died at 105. Surrounded by Marine memorabilia, Lee recalled the terror of charging through a wheat field swept by German machine-gun fire. Then he broke down, grieving the buddies he’d lost.

Thinking of Lee, Miller stops at the headstone of every soldier, sailor and Marine in the cemetery to pay his respects. He’s touched to see that beside each U.S. flag flies a French flag, placed by local schoolchildren.
“This is something every American should see,” he says.

See a photo album of American monuments, memorials and burial sites around France.