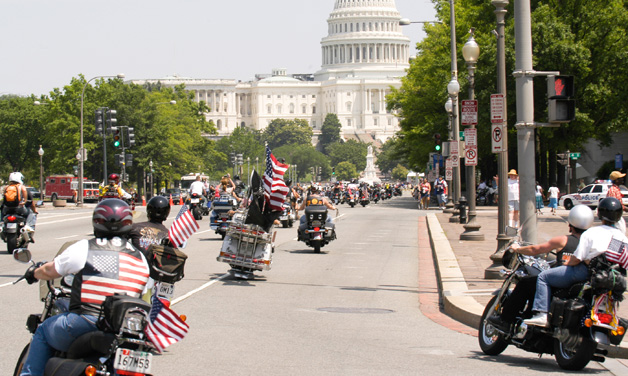 Nobody on Capitol Hill paid much attention to John “Top” Holland until he changed his wardrobe. In his earliest days of lobbying, when the Vietnam generation was young, a gentleman would never visit a place or person of importance dressed in anything other than a well-pressed business suit.

And so it was that Holland, a veteran of World War II, Korea and Vietnam, climbed Capitol Hill in his Sunday best to deliver his message to Congress. To hear his friend Walt Sides tell it, Holland blended right into the halls of Congress – in fact, a little too well, he finally decided.

To get anyone’s attention, Holland needed an image change. He went for an almost sinister-looking combination of militaria and Harley Davidson leathers, apparel he and his friends felt most comfortable wearing. It paid off. Dressed as they were, they began getting more and more attention when pleading with lawmakers to address what they viewed as official neglect of POW/MIA issues.

The biker garb wasn’t a gimmick, but normal weekend attire for Holland, Sides, retired Marine Cpl. Ray Manzo and Ted Sampley – co-founders of Rolling Thunder, which has grown into the massive annual “Run to the Wall” motorcycle procession in Washington. This Memorial Day, Rolling Thunder celebrates its 25th anniversary, and The American Legion is an official sponsor.

Holland, a Legionnaire, was born in 1927. He left his family’s farm in southern Indiana just before his 15th birthday, a month after the Japanese attacked Pearl Harbor. He lied about his age to a Marine Corps recruiter and got in. He was in the Marines for the duration of World War II, then joined the Army in 1947. He saw action in Korea and later with the Special Forces in Vietnam, pulling four tours as one of the original Green Berets. He retired from the service in 1970, but took up the POW/MIA cause with a vengeance. It would be his calling for the rest of his life.

Prior to Holland’s funeral in July 2010, Rolling Thunder colleague Danny “Greasy” Belcher wrote on various websites, “EVERYONE with a POW/MIA patch or who claims to care about the POW/MIA issue should attend John’s funeral. He was the first to get the POW/MIA issue moving by trying to change the 1942 Missing Service Personnel Act, which let a POW/MIA be declared dead after one year ... John Holland was the one who got us off our complaining asses and calling and visiting our congressmen and senators ... He made us accountable for our fellow abandoned Americans and showed us that we could do something besides complain.”

Manzo, the man credited with actually conceiving the now-famous motorcycle run, was not much different. Sides recalls that the idea was first advanced by Manzo on a “nice, warm, sunny day in June 1987” on the steps of the Lincoln Memorial. Sides and Holland were sitting there, thinking back on their years in the service, when they were approached by fellow vet Bob Schmidt, who was leading a stranger, Manzo.

“Ray come walkin’ up there with Bob, and Ray said he wanted to do a motorcycle run, and we talked about it a few minutes. John said, ‘Whaddya think?’ And I said, ‘Man, I don’t know.’ So that’s how it started.”

Despite doubts about the run’s viability, the veterans went to work on the National Park Service and local authorities to gain permission for a motorcycle parade. Initially, public-safety officials resisted the idea of a horde of leather-clad bikers invading the broad avenues and green expanses of the capital. “They didn’t wanna hear ‘boom,’” Sides says.

Sampley, a former Green Beret, has a history of activism on behalf of Vietnam War veterans dating to the early 1980s. His public demonstrations for the POW/MIA cause were legendary. He once chained himself to the White House gates, waged highly charged public attacks on Sens. John McCain and John Kerry, displayed bamboo cages housing mock POWs, and spent more than one night behind bars himself for his actions.

In 1994, Sampley – to make a point about the importance of identifying MIAs – announced his belief that the remains in the Tomb of the Unknowns at Arlington National Cemetery were not unknown at all. After much research, he concluded that the allegedly anonymous warrior sealed in the tomb was actually an Air Force pilot reported as MIA: Lt. Michael Blassie, who had been shot down in 1972. The theory was confirmed by DNA analysis in 1998. Sampley died in 2009 at 62. Blassie’s sister gave a eulogy at the funeral.

In 1956, at 16, Walt Sides joined the Marines after “getting in a little trouble.” Like Holland a decade and a half before, Sides lied about his age to get in. After his hitch, he took advantage of the GI Bill and enrolled at the University of Oklahoma, where he played football. There, he explains, he soon found himself “in a little more trouble” and headed back to the Marines. This time, he stayed in for 21 years.

Sides worked as a sniper-scout platoon leader in Vietnam. After retiring from the service, he took up the POW/MIA cause and remains vocal about the issue today.
“We know damn well there’s people left over there,” he says. ‘There’s over 1,200 still not accounted for. We just bought our way back in North Korea, and they just brought remains out of there ... In 2010, I think, we brought out 19 and in 2011 we brought out 22. There’s still people over there.”

Sides concedes that there is little chance any vanished warriors from Korea or Vietnam are still alive. But the Rolling Thunder Run to the Wall grows each year, raising awareness about those whose fates remain unknown.

In 1988, with a turnout of about 2,500 bikes, Rolling Thunder was born. This year, the event is expected to attract approximately 1 million people – bikers and spectators alike – for the annual procession from the Pentagon’s parking lot to the Vietnam Veterans Memorial.

In recent years, the Run to the Wall has become something of a national sensation. Those who cannot participate say they follow the run online and in social media. A YouTube video of Marine Staff Sgt. Tim Chambers – known as “the lone Marine” – saluting Rolling Thunder riders during the 2011 run has been viewed more than 2.7 million times.

The event has now outlived many of those who created it. In a sense, that was their mission: to create greater awareness of missing servicemembers for as long as they remain unaccounted for.

Sides, now 72, says he never really thought about how long the ride would last. “After about eight (years), I knew that we weren’t going to quit, and we’ve been kind of hustling along ever since. It’s been a great run – a really great run.”

Craig Roberts is a multimedia specialist for The American Legion.