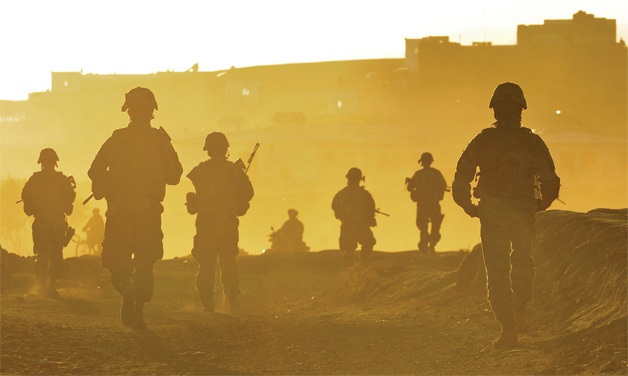 In recent years, Washington’s budget axe has fallen disproportionately on the military community. While the effort has been billed as a patriotic act of debt reduction and burden-sharing, the military and taxpayers end up holding the short end of the stick. The Obama administration’s latest budget request for 2013 asks for spending increases of $1.5 trillion and tax increases of $1.9 trillion, for a total of roughly $400 billion in deficit reduction over the next decade. Any budget is more than a set of numbers; it is a vivid articulation of priorities. Unfortunately, this budget increases funding to all other government agencies, leaving only the military and taxpayers to get by with less.

The consequences of these ongoing defense budget cuts are already being felt in communities nationwide – among public and private manufacturing workers, in small businesses and veteran-owned companies. Worse yet, these reductions weaken our national security.

Americans tend to support cutting the defense budget until they need it. This time, however, the nation may find that some long-held capabilities, scientific know-how, industrial base infrastructure, retention and the appeal of service will be significantly compromised.

Tooth and Tail. The current budget calls for separating nearly 100,000 active-duty soldiers and Marines from service, while leaving the Pentagon’s civilian workforce of 750,000 mostly untouched. This follows a four-year trend in which the administration cut 15,000 active duty positions while it added 62,000 civilians to the DoD bureaucracy. Cutting needed “tooth” while adding expensive “tail” is the wrong approach.

When the United States cashed in on a flawed peace dividend at the end of the Cold War by dramatically reducing the size of the military, veterans at least found a more welcoming commercial economy to absorb the change. During the rise of the digital age, jobs multiplied quickly, and by the end of the 1990s, the national unemployment rate was near a half-century low at 4 percent.

Today’s economy, encumbered by unsustainable federal fiscal policies, is different. In May 2012, when the jobless rate for all veterans was 7.8 percent, veterans who served in Iraq and Afghanistan faced an unemployment rate of 12.7 percent. Young veterans 18 to 24 confronted the biggest hurdle, with an unemployment rate over 30 percent, according to the congressional Joint Economic Committee. If those currently serving continue to face difficulty gaining civilian employment upon leaving the service, budget cuts could cause requests for unemployment benefits to spike, flying in the face of the debt reduction that is supposedly forcing these savings in the first place.

Unit and equipment cuts will also lead to additional reductions. Cutting active-duty troops will not only diminish the Army’s vehicle modernization plans but lead to the restructuring of brigade combat teams. The early retirement of ships and aircraft, coupled with insufficient new construction plans to replace aging assets, is already leading to unit decommissionings. The Air Force, for example, is retiring much of its A-10 Warthog fighter fleet. The proposed elimination of 21 A-10s at one unit in Michigan would lead to almost 600 jobs lost.

Early retirements and units standing down make installations and communities more vulnerable in a future round of base closures. Although the Pentagon’s latest proposal is on hold by Congress, military communities may not escape damage. With less fanfare and debate than a new round of closings, bases may face effective closure when the units that call them home simply disappear. Additionally, Pentagon leaders have indicated that they will not wait on congressional approval to begin base realignment and reductions; instead, they will use executive authority whenever possible – starting now.

One example is the Air National Guard, which is absorbing 55 percent of the Air Force’s aircraft reductions under current budget plans. This is already leading to unit deactivations and closures in Michigan, Louisiana and Oklahoma. And the Army is reducing its public workforce at some depots due to fewer orders and demand. This backdoor downsizing is just as damaging to communities and families as a round of specifically targeted base closures.

Ripple Effect. The direct and indirect impact of budget cuts on local communities is far more extensive than advertised. The Aerospace Industries Association (AIA) recently released a comprehensive report that analyzed the impact of the shipbuilding, aerospace and defense industries on the wider U.S. economy. The report found that 3.5 million employees are associated with the defense business. The industry generated $324 billion in sales in 2010 and accounted for 2.23 percent of U.S. GDP, as well as 7 percent of all exports. Furthermore, each shipbuilding, aerospace and defense job produces 2.36 jobs elsewhere in the economy. These are often private-sector jobs – for example, the auto mechanic or coffee-shop owner who is supported mostly by shipyard workers.

Thus, it should come as no surprise that defense cuts will produce a ripple effect beyond this direct and often highly skilled workforce. According to an AIA analysis, for every primary defense manufacturing or contractor job cut, three other U.S. jobs will be lost. AIA estimates that DoD has already cut $19.3 billion from weapons acquisition in the president’s budget, and acquisition budgets could take on an additional $25.7 billion in cuts if sequestration – automatic spending cuts that became law when the congressional “supercommittee” failed to compromise – stands, leading to a total cut of $45 billion from military modernization programs.

This number, however, might actually be low. Sequestration, as currently constructed, will feature uniform 10-percent reductions at the program, project and activity levels across the entire DoD budget. However, it is unlikely that sequestration in its current form will be implemented. Instead, the administration has the authority to – and will surely – exempt military personnel from January’s automatic cuts. While this is the right policy to pursue, the impact on the military’s anemic modernization plans will deepen, and equipment programs that are needed to protect those in uniform and play a large role in our economy will take a bigger hit. Take, for example, the Army’s only facility left for building and integrating tanks, in Lima, Ohio, for which the Pentagon has proposed a temporary shutdown. This could lead to roughly 1,000 direct layoffs and incalculable costs to restart the line. The House and Senate have intervened to try to avert the layoffs, but as of now the fate of the plant remains up in the air.

For each dollar that DoD does not spend on military equipment, an additional $2.64 is lost in the general economy. This means that workers who are furloughed or laid off from a cargo aircraft production line, for instance, will not go to the food truck near the plant for lunch or buy that cellphone for their son or daughter at Christmas. The result is that over 1 million full-time, year-round jobs will be lost if sequestration is not reversed. This blind budget-cutting scenario would raise the national unemployment rate by 0.6 percentage points and cut U.S. GDP by about $86.5 billion – canceling out nearly 25 percent of expected growth for 2013.

In other words, the country will save roughly $99 billion by reducing the defense budget in fiscal 2013 in the name of debt reduction but will see its GDP fall by close to the same amount as a direct consequence. This is not a sound approach to balancing the federal checkbook, particularly when our military and its equipment are needed to meet current national security objectives.

The Center for Security Policy has created a database that details the national, state, city and county impact of defense budget cuts and the businesses affected. The database breaks out categories such as veteran- and minority-owned businesses, as well as small and local businesses. In 2011, DoD had more than 62,000 individual contracts with veteran-owned businesses, over 40 percent of which were contracts with service-disabled individuals. Under the current budget request, these businesses face nearly $1.6 billion in lost revenue. And if sequestration remains law, they could face over $3 billion in losses.

More broadly, DoD has more than 73,000 individual contracts with small businesses, which stand to lose more than $5 billion nationwide if sequestration is not addressed. These cuts will fall disproportionately on 10 states. As AIA notes, California, Virginia, Texas, Florida, Massachusetts, Maryland, Pennsylvania, Connecticut, Arizona and Missouri would account for 58.5 percent of job and income losses. These states would face 588,700 lost jobs and $34.7 billion in depleted personal income if current law is not changed to turn off these automatic additional defense budget cuts.

Arrested Development. Cutting defense spending will adversely affect other areas of the economy. The Pentagon has played a key role in developing technologies that have transformed our commercial economy. The nation’s first general-purpose electronic digital computer was created by the Army during World War II to assist in calculating firing trajectories for field artillery. After the war, the military expanded research into computers and funded research that spun off into private-sector uses.

The Defense Advanced Research Projects Agency (DARPA) played a critical role in the development of the Internet and even email by funding the design and deployment of one of the world’s first electronic computer networks, ARPANET. At first, ARPANET connected computers at universities such as UCLA and Stanford. Thirty years after its development, its successor helped create a globalized economy by forming the most extensive collection of knowledge in human history, enabling communication, commerce and collaboration across continents.

Similarly, DoD space-based satellite navigation systems formed the basis for the modern Global Positioning System (GPS), now found in many U.S. cars and smartphones. Developed in the early 1970s, satellite navigation exponentially advanced military navigation and surveillance. Yet once satellite navigation entered the civilian economy, its uses gave rise to a new sector of the economy dedicated to navigation and location technologies. Police can track stolen phones, tourists can explore unfamiliar cities, and fishermen can navigate perilous waters all because of Pentagon investment in a long-shot program.

As the defense budget’s top line falls, so too will funding for projects that allow for needed cutting-edge research and development. Less research, development, testing and experimentation means less innovation and fewer opportunities for enterprising individuals to create the unthinkable. Without the Pentagon’s work to develop computers and the Internet, it is likely that Steve Jobs could not have founded Apple and Pierre Omidyar could not have started eBay. The entire U.S. economy –and the world – would look quite different absent decades of innovation begun by the U.S. military.

Unfortunately, while it is impossible to predict which defense projects will shape the future, advanced weapons development already has been and will continue to be the favored casualty of further cuts. Projects such as directed energy lasers and materials that harden faster than concrete have real and vital national security implications, but they may one day reap benefits in the wider economy. There is no way to know how many jobs the next military innovation will create or how lives will be negatively affected by programs that never see the light of day due to defense cuts.

The nation’s checkbook cannot be balanced wholly on the backs of our military, yet Washington is increasingly turning to a shrinking pot of money to solve the nation’s looming fiscal crisis. If defense cuts currently mandated by law stand, the fragile economy will worsen overnight. Up to 1 million jobs could be lost, and countless veteran-owned and small businesses will be adversely affected. Many innovative next-generation projects may never be pursued, and the world will be poorer for the result.

Defense is the first responsibility of government – and the government, in turn, has a responsibility to support its defenders. As policymakers focus on strengthening the economy, they would do well to consider how defense budget cuts – often portrayed as necessary sacrifices to get federal spending in line – can have a devastating impact on the very economy they are supposedly designed to bolster.

Mackenzie Eaglen is a resident fellow at the Marilyn Ware Center for Security Studies at the American Enterprise Institute.