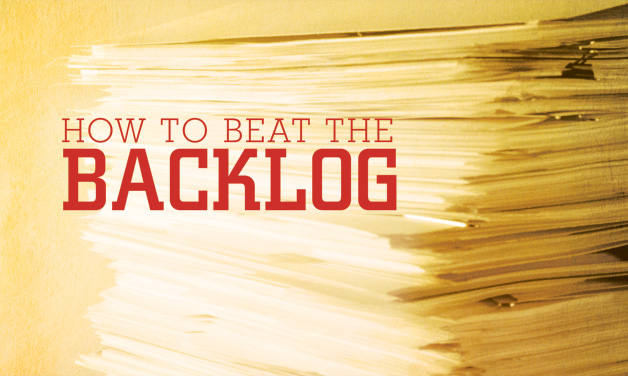 You find them tucked away in federal office complexes, their desks snowed over with government forms and file folders. They live on the phone. They’re always online. They’re waiting for faxes, checking calendars, thumbing through regulations and mentally preparing for the next appointment, which won’t be like the last, because every veteran they meet represents a unique set of problems. They work late and on weekends because there’s far more to do than time to do it, and because families depend on their life-changing assistance. Most people don’t even know they exist.
Across the United States, more than 2,500 specially trained and accredited American Legion service officers help veterans and their families understand government benefits and how to apply for them. “There should be 10,000,” says Jay Walsh of Louisiana, a dean in this elite corps of advocates. “What do department service officers do? You name it. We do that.”

Foremost, service officers help veterans and families file applications for VA benefits. The process is complicated, and one mistake in one field of any form can tie up a claim for months, adding to VA’s gargantuan backlog of unresolved cases. American Legion service officers help applicants gather the right supporting documents, fill out and submit forms correctly, and understand the options when VA’s decisions are issued. “It’s easier to deny than it is to approve,” Walsh says. “But if it’s a complete claim, it’s going to go smoother and reduce the possibility of VA sending it back for more work. The key is to submit a complete claim that VA can’t deny.”

Denials, which lead to appeals, and remands, in which VA requires additional documentation before a decision is issued, are among many contributors to the backlog – i.e., cases that have not been wrapped up within 125 days of application. In July, VA had an estimated 920,000 benefits claims in process, over half of which were 125 days or more old, even though the department has completed more than 1 million a year for the past two years and is on track to break another performance record by the end of 2012. Unfortunately, even at that rate, VA continues to lose ground against the number of incoming cases. The system grows more strained as Iraq and Afghanistan veterans separate from active duty, often with multiple health-care conditions from their combat experiences, and as the Vietnam generation ages and looks to VA for help handling medical costs or files for previously unavailable benefits related to Agent Orange exposure.

The backlog has been a source of frustration for VA since the late 1990s. Dr. James Peake, one of three different VA secretaries during the George W. Bush administration, in 2008 described VA claims processing as “... a 1945 benefit, 1945 process, around a 1945 family unit. We need to change it.”

At the Legion’s 92nd National Convention in Milwaukee in 2010, VA Secretary Eric Shinseki made a vow to “break the back of the backlog this year.” To do that, VA hired more than 3,300 new employees to process claims and employed advanced computer technology to speed things up. Despite such efforts, the primary criticism about the system remains that it is largely paper-based, susceptible to human error and mired in bureaucracy.

VA Undersecretary Allison Hickey now circles 2015 as the target year to break the backlog. She announced this summer a new processing model expected to increase performance by 150,000 to 200,000 claims per year. “Our redesigned model follows comprehensive planning and testing to ensure we have the right recipe for success,” she said in July.

In the meantime, American Legion service officers are plowing through the problem one veteran and family at a time. “We do what we can on our end, but we can’t stop the roadblock on VA’s end,” says Dave Holcomb, an accredited service officer in Jefferson Parish, La., who chose this career because, he says, he was “tired of seeing veterans get hung up in the bureaucracy.”

“Nothing replaces one on one,” Walsh says. “And if you’re going to work one on one, you’d better be well-trained. Every case is different. That is why you have to know what you are doing.”

Different states have different employment arrangements for service officers. They may be American Legion department employees. They may be state, county or city employees. The common thread is that they are trained at national American Legion service officer schools conducted twice a year, one in Indianapolis and another in Washington. Office space is usually provided on or near VA medical centers, regional offices or other government facilities.

Local American Legion post service officers are usually volunteers who provide general information and referrals to accredited professionals. In some cases, accredited service officers work on a volunteer basis after retirement just to help families get through the process. Some are not trained or accredited but represent veterans in their claims applications anyway, Walsh says, “and (they) put themselves in jeopardy. What they should do is provide referrals to those who are trained and accredited.”

Considering that the profession includes an ever-changing mix of law, medicine, psychology, accounting, marketing, administration and compassion – all free of charge to the client – the pay is modest at best for state-employed service officers. “Anyone who tells you they’re getting rich being a service officer is pulling your leg,” says Lannie Thomas, who has spent the last three decades as a Michigan department service officer. “But you get a chance to make things better for your brother or sister. That’s why you do it.”

“Most people take a job, and at 5 o’clock they’re done with it,” says Lakeisha Bracey, an American Legion representative who helps active-duty personnel file for VA benefits as they near discharge. “I can’t do that. These veterans served our country. They did what most won’t do, and so if I’m still working on their claim at 10 o’clock at night, I’ll do that.”

Jeremy Wolfsteller, an assistant department service officer in Minnesota and a service-connected disabled veteran of Operation Iraqi Freedom, entered the profession after his own pursuit of VA benefits. “I probably wouldn’t be here if I didn’t go through the process myself,” he says. “I’ve done it, and now I want to be able to help others who are going through the same thing ... You don’t just see it as a job. You like to help them get answers. They come in discouraged or disappointed, and you can help them leave with a smile.”

“I love this work,” says James Topps, a department service officer in Michigan for the past 15 years. “You’re changing lives and bringing something to somebody in need. You have to be compassionate and caring about your fellow man.”

In the summer of 1919, before The American Legion had its first national convention, dozens of the organization’s members were already at work throughout the United States, helping veterans file claims and receive benefits from the Bureau of War Risk Insurance, a predecessor of the Veterans Benefits Administration. Every American Legion department and post was asked to appoint a war-risk officer to help veterans understand what they were eligible to receive and how to apply. Within the first year, Legion war-risk officers secured hundreds of thousands of dollars in compensation for World War I veterans, got five men released from jail and even located soldiers’ luggage that had been lost by the military on the trip home from Europe.

The Legion’s war-risk officers evolved into department service officers as the various government agencies dealing with veterans were consolidated into the Veterans Administration in 1930. As America marched off to war and home again in subsequent decades, the role of Legion service officers grew more complicated. They became experts in GI Bill education benefits after World War II. They helped veterans obtain VA home-loan eligibility certificates. They helped at job fairs. They assisted surviving spouses trying to determine what kind of death benefits they could receive. Health problems related to Agent Orange exposure, post-traumatic stress disorder and undiagnosed Gulf War illnesses shared by many who fought in Operation Desert Storm added new dimensions to the claims process, and to the service officer’s job. Iraq and Afghanistan veterans are today returning to civilian life having survived combat at rates much higher than those of previous war eras but suffering from multiple service-connected conditions and, if history is any indication, the strong possibility of more to come. Every time Congress passes new laws to help veterans or VA makes administrative changes, it’s the service officer’s responsibility to understand and help veterans searching for answers.

“The Vietnam War has been over since 1975, and they are still adding new conditions linked to Agent Orange,” Walsh says.

The playing field for service officers is constantly shifting. American Legion service officer schools, with sessions focusing on legal, medical and procedural issues – as well as informal sharing of best practices – keep those who work in this profession well-educated. What cannot be taught, however, is the amount of heart it takes to help veterans in need.

“I love to help,” says Cynthia Mann, an assistant service officer in Los Angeles. “My brother was a veteran, my dad is a Korean War vet, and I have family in the military now. I love the fact that I can be instrumental in providing service to veterans – especially to surviving spouses. VA is a huge agency, and I like being able to help a veteran cut through the red tape and find shortcuts to getting the benefits they’ve earned.”

Adds Lannie Thomas of Michigan: “From an emotional standpoint, there’s nothing greater, because all of us in the Legion, especially service officers, have that eternal flame in our hearts, and it never goes out. I’ve known people who have done it for 20 years, 25 years, 30 years – and if you talk to them today, they want to talk about VA benefits. It just never goes out.”