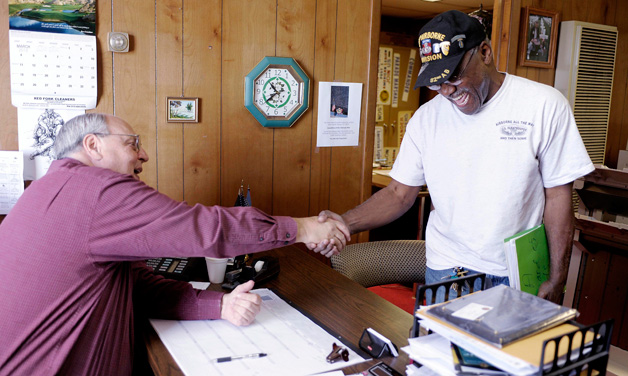 To anyone except John Cloud, the Vietnam veteran’s case was hopeless. Johnny Pryor had gone AWOL three times, tried to kill himself twice, spent months in the stockade and was booted out of the Army. VA would never grant his claim. “We don’t take guys with bad discharges,” says Cloud, who has worked as a veterans service officer for nearly four decades. “I took him.”

Cloud soon learned that Pryor came home from combat to face his grandfather’s death, his parents’ divorce and his longtime girlfriend’s marriage to another man while Pryor had been clearing jungle and dodging enemy bullets. Friends who had gone to college to avoid the draft soon avoided Pryor. The public was hostile.

“He came home from Vietnam to the whole gamut,” Cloud says. “He wasn’t in his right mind, or he wouldn’t have tried to commit suicide.”

Eight years, two appeals and untold hours of paperwork later, Cloud won Pryor a better discharge and VA benefits based on an obscure 1940s law that gives veterans a break if they were mentally unstable when they committed the act that led to their bad discharge.

“Nobody else read my file,” Pryor says. “John Cloud took me under his wing and treated me with respect. He’s helped me every day since I met him.”

That’s how Cloud built a distinguished 35-year career with the Oklahoma Department of Veterans Affairs (ODVA) before retiring and becoming a volunteer service officer for American Legion Post 1 in Tulsa and the local VA Vet Center.

“People hunt for him,” says Sandra Oxford, manager of the Tulsa Vet Center. “They won’t let anybody else help them.”

The Brushoff. John Wayne Cloud served as an Army dog handler in Vietnam, walking point “for whatever outfit needed us.” He was drawn to veterans advocacy as a result of the brushoff he and his cousin received when they went to VA in 1969 to sign up for their GI Bill benefits. “We walked into that office, and there was a griping old federal worker who said, ‘All you Vietnam veterans want is something for nothing,’” Cloud says. “I told myself if I ever was in that kind of a position, I wouldn’t treat people that way.”

He earned a degree at what is now Northeastern State University and then bounced between oil-field and ranch jobs. He answered an ad for a service officer job at ODVA and started work in 1975 as a fieldman, helping veterans along a small-town circuit in southeastern Oklahoma. His ODVA career next took him to Muskogee, and by 1980 he was based in Tulsa.

Two years later, Cloud was looking for a new job. State wages were stagnant because of the oil bust, and he was exhausted from dealing with VA. “It was like a secret society you were fighting every day,” he says. “You were just beating your head against the wall with claims. And you’d go down to the hospital, and they wouldn’t even give you an aspirin.”

Cloud changed his mind about quitting after he found a poem lying next to the Vietnam Veterans Memorial at the 1982 dedication of the Wall. “The poem talks about the Wall and the names and said, ‘Make sure we didn’t die in vain. We died so you could make a difference.’”
That was all he needed. “I thought, ‘I’m right where I need to be.’”

Tens of Thousands of Claims and Counting. Cloud has provided assistance for three generations in some families. He’s known for visiting homeless shelters, jails and any other places where veterans are in need. He prepared more than 80 emergency financial assistance applications in two days for veterans whose homes were damaged by the 1984 tornado in Mannford, Okla. Even VA employees seek Cloud’s help  filing claims – on behalf of their parents. Any notion of stopping, paycheck or not, is out of the question. “John thought he was going to retire – that was funnier than ever,” says Oxford of the Tulsa Vet Center. She recruited him as a volunteer after he left ODVA in March 2010, and Post 1 coaxed him into becoming a volunteer service officer.

When Cloud arrives at Post 1 on a spring morning, the lobby is filled with veterans waiting to see him. Two need help filing claims for hearing loss. One doesn’t have money to pay his water bill. Air Force veteran Thurman Phillips – the fifth or sixth visitor of the morning – walks into the cluttered, wood-paneled office, lowers himself into the chair before Cloud’s desk, leans in and says, “Can you call about my claim? I haven’t heard anything for a year.”

Cloud soon determines that Phillips’ claim for PTSD and ischemic heart disease is buried in VA’s bureaucratic snarl. “It went back to the rating specialist, and there it sits,” Cloud says after hanging up the telephone. “If you don’t hear by the end of April, we may have to go to the congressman to get this off high center.”

Cloud works the telephone, asks veterans questions, fills out claim forms, digs through his briefcase and scans the pink phone-message slips accumulating on his desk. He takes a quick break to help a veteran’s wife who needs provisions from the post’s food pantry until her husband is well enough to work. And then he goes right back to his desk to deal with the veterans still waiting to see him.

By noon, he has met with nearly a dozen veterans, putting to work his knowledge as a claims expert, talent as a counselor and passion as an advocate.

“John kept me encouraged,” says Cornelious Henderson, clutching a lime-green file folder with “Board of Veterans Appeals” written across the front. “I thank God for that.” He enlisted Cloud in his fight to get VA to upgrade his disability rating for the wear and tear he endured during his airborne career, including two tours in Vietnam.

“I had a lot of people at VA who had the gall to tell me they couldn’t do anything for me,” Henderson says. “If they had more men like John Wayne Cloud, more veterans would get their just due – not just their compensation but medical services.”

Textbook Definition. Sleepless nights and haunted dreams followed Cloud home from combat, as they did for innumerable Vietnam veterans. His response was typical. “When I got my paycheck, it was down to the bar I went. (Then) I found a woman who straightened me out. I went back to college.”

In December 2008,  Cloud helped start the Tulsa County Veterans Treatment Court, where former members of the military undergo treatment, rather than go to jail, for many nonviolent offenses. Cloud is one of four service officers on hand every Monday afternoon at court to help defendants file VA claims and access treatment opportunities, housing, job-training and education programs.

“A lot of these troops come back and may not know services are available to them,” says Tulsa County Veterans Treatment Court Judge David C. Youll, who served 23 years in the National Guard as a helicopter pilot. “Just getting hooked up with benefits they are entitled to has turned around a lot of lives.”

Cloud mentors about 15 defendants at any one time. He takes their 2 a.m. phone calls when they need someone to talk to. He helps them find rides to treatment or, in severe cases, food and shelter until they get on their feet.

“Even in court – if he sees a vet getting agitated about something, he takes them out in the hall,” says Matt Stiner, a Marine Corps Iraq veteran and director of the nonprofit Justice for Vets. He recruited Cloud to help start the Tulsa veterans court. “He instinctively knows this stuff.”

Wilbur Lunsford, who sought Cloud’s help with a hearing claim, is one of the Tulsa court’s success stories. He developed an attachment to alcohol about the same time he joined the Marines in the 1980s. The problem became severe after he returned to Oklahoma six years later. “Vodka was my favorite, but 100 proof wasn’t doing it for me,” he says. An arrest for marijuana landed him in Veterans Treatment Court.

Today, Lunsford has been clean and sober for three years, having graduated from the program in October 2011 and earning an associate degree in culinary arts in December. “If it wasn’t for that program, I would have done my time, got out and got back in trouble,” he says. “I probably would have ended up dead.”

The next morning, Cloud goes to the Tulsa Vet Center and helps a widow sort through piles of paperwork to file for benefits she had no idea were available to her. That includes a claim to cover some of her husband’s burial costs since he served 30 years in the Navy, including three tours in Vietnam, and died as a result of illnesses related to Agent Orange. “When in doubt, fill it out,” Cloud says, breezing through one of the multipage forms. “That’s been my policy for 40 years.

“I am so glad you came in today,” he tells the widow. “We are going to get all this done today.”

“John Cloud is the textbook definition of what it means to help veterans and their families,” Stiner says. “He has shown me what one person can do to affect tens of thousands of people.”